I was in Madison Wisconsin for a speaking engagement at the Dream Bank, a community space dedicated to the pursuit of dreams, run by American Family Insurance. I had been at this Dream Bank six years ago when I was running from Dane Wisconsin to Davenport Iowa in an event that I created called, wait for it, Dane to Davenport. It was hard to believe that it has been six years since I was there but when you get old time flies by.

As is the case whenever I travel, if I have time, I try to find a local race to take part in. As luck would have it there was an event just south of Madison in Oregon, Wisconsin. Because I strive for accuracy you’ll be happy to know that the pronunciation of this city is different from the pronunciation of the state. The emphasis being on the last syllable and pronouncing it "gone" was difficult for this former resident of the tate to say this when he had to stop his mother from doing that very same pronunciation all the time. But I persevered.

This small local race had usually only had a 10 or a 5K race in it, neither of which fit my limited skill set in running. Fortunately, this year they added a 10-mile race. That sounded pretty darn good to me so I signed up.

The weather called for 50s and 60s most of the week leading up to the race with strong possibility of rain. But as the morning broke it was clear that it was going to be rather sunny. In fact by race time it was in the low 60s with a bright sun ahead. This is obviously not “ideal“ but for summer it is hardly bad whatsoever. Throw in the fact that on Tuesday just four days before this race I had done in an aquathlon in Austin Texas where at 6:30 PM it was in the mid 90s and let’s just say I was quite happy with the weather. One thing that I was not happy with, however, was a breathing problem that I had the morning of the race.

This spring has been a very good training spring for me and I thought that my racing was going to come together at a marathon in Canton, Ohio in April. But I had trouble breathing that day and ended up tanking it just about three miles in.  In Wisconsin, I was experiencing the same thing I don’t know if this was allergies or what but it is quite a bummer to feel that you are trained and not have the results on race day. So I got to this race well in advance hoping to maybe jog out some of the crap in my lungs. I ran over certain parts of the course and got in a good two miles before the race started. By then my lungs felt much better but far from perfect. I noticed it was sparsely populated race for us 10 milers, as we started before the other events.  But I noticed one fella who looked quite spritely. 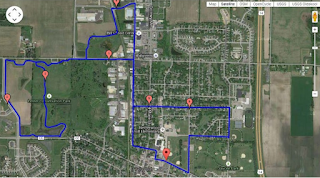 Within a quarter of a mile, after the start a very frustrating thing happened. I’m not particularly fast. I can win a race here and there but all it takes is someone with moderately good talent to show up and I don’t have a chance. In other words, the race has to be relatively small in order for me to maybe get a victory. Well this race was small but some ringer came down from the Movin Shoes store in Madison Wisconsin to show the locals and travelers like me who was boss. I could see that there was no way I was going to win this race and soon the leader was gone from sight. Also, another gentleman was between the two of us leaving me solidly in third place.

The race was well-organized for a small town race with wonderful markings on the ground for all four of the different races that were taking place. However, the one thing that was missing was mile markers. I found this out as we entered into what was the first of two loops of a park system. It was hard for me to tell if the gentlemen in front of me were running fast or if I was simply running slow. As my GPS watch was on the fritz, I was simply using a standard stopwatch which I thought would be enough if I had mile markers. That was not the case. As such I was now in no-mans land with no one really to chase in front of me and no idea of how fast I was going. Normally I have a good idea of my pace but as the past few years have been off, with me laboring in Texas heat, my inner sensors haven't been calibrated to what felt hard because it was hot or what was hard because I was running fast.

As i was hoping for a win on this day, it was difficult to keep myself motivated with that out the window and the thought that I wasn't running well at all. I run for a multitude of reasons.  But I race to run fast. When that isn't happening the fallback is to place high in the event, the thinking being that everyone is suffering. However, by the time we left the park and crossed a road into another smaller park I had a little bit of motivation.

There was a runner who I could simply not shake probably about 30 yards behind me. As we made little turns here and there, I was given glimpses o whomever was behind me and this young fella was doing a great job of hanging on. I figured I might not get first or second but I was going to be damned if I let him keep me from joining the podium. Especially since he was wearing baggy basketball shorts. I can't sleep at night if someone wearing basketball shorts of five finger shoes beats me. So as we ran down and started the second loop I began to pick up the pace. At least I think I did as a distance between me and my chaser grew.  My lungs finally opened up and even though I was drenched in sweat in spite of it only being around 65 degrees, I felt like I was running fast for the first time all day. However, I could see I was getting demolished by the first place runner. I wondered if he had not been there if I could have made a race out of it with the guy in second place. It didn't really matter now, as he too was also solidly in front of me.

By now runners from the other races were beginning to either exit the first park or enter it from another direction. So, while there was nary a spectator cheering out on the course other than the few that were manning the aid stations, it was still nice to see other participants.

I had a fair estimate of an idea of where the 8th mile was simply by extrapolating a course map I had seen for the 10K the night before the race. When I hit that spot it look like I was actually going to have a solid time for this race. As such, obviously not feeling that great about my effort, I figured that this might not be the right mile marker. As I headed down a stretch of road where I had run earlier in my warm-up I realized I was much closer to the finish than I thought. I knew the 10K and 10 mile course finished the same but doubting my own ability I figured the 10 mile course must branch off for an extra half mile or something somewhere. 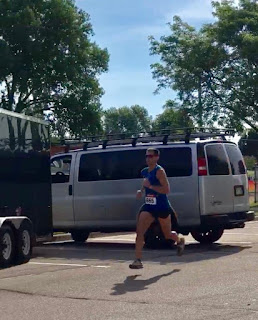 However with about three minutes of running left I realize that I was on the right course and only had the finish line in front of me. I looked at my watch and was beyond surprised. If I had known a little bit sooner I might’ve been able to put a bigger push on to run a tad faster, But as it stands when I passed in third place and a time of 1:07:21 I had well over a one minute PR. I temper this excitement simply with the fact that I have run a faster pace for no less than five or six marathons and numerous halfmarathons as well. But the fact that I’ve only run a handful of 10 milers means I still set a PR. Can't argue with facts, people!

What was quite hilarious however is my desire to not be kept off the podium didn’t matter as the race only gave out awards for first and second place. I’m not complaining whatsoever as I have more than enough non-precious metals in my collection. It just tickled me that one thing that was spurring me on was one thing that I never ended up getting.

I thoroughly enjoyed my time in this small town eating some pasta from a place that after 40 years was closing its doors in just a week. While I always lament that I have not traveled internationally nearly as much as I would like, I do like how much I have seen of United States. Going to small towns like this and experiencing the local flavor has always made any travel woes well worth it. Seeing good friends and meeting new ones is also a plus. When you start a trip with a vocational opportunity that allows you to inspire some people and hear their own stories and finish it with a new race personal best all in about 48 hours then one must consider that a sincere success.

Now I just need to figure out this breathing problem and tackle some more races soon.
Posted by Dane at 12:14 PM