Pre-race:
A short drive in the morning from my loft to the race, while picking up bestie Shannon to go run around in the cold meant I not only got to sleep in my own bed, I did not have to get up at 4 a.m. to get to the start. Those are rare treats for me I do not unappreciate. (Yup, I made up that word.)

Of course, in the four years of the running of this event (last year's recap) it had never been anywhere close to this cold. It wasn't exactly freezing - it was actually well-below. (Didn't think I was going that way, did you?) But we knew the sun was supposed to shine the entire day and about 85% of each of the barely under one-mile loops would be in that sunlight. (The RD says they were .94; I say they were .96)

In addition, lest anyone think the course was flat, here's a look at the elevation profile of each loop. Not a lot gained or lost per loop, but the ups and downs add up over time (to the tune of 5,600 feet of change for me personally.) Also, for those who felt they were constantly turning left, there were actually 7 left hand turns and 4 right-hand turns of note per loop. If stats you want, I gots them!

With a starting temperature around 19 (and the "feels like" hovering around zero) 52 hardy souls ventured out in support of both burning off some calories and raising money to fight autism, as the race funds would go to Operation Jack, an organization started by my buddy Sam.

My personal goal was to get a 50k in and anything else would be icing on the cake. I paid special attention to the first 20 miles as I wanted to keep them on a nice clip, but after that it would just be running hard when I felt good.


The first 3 loops were probably the best of the day for me. I was in the lead and was enjoying that there weren't that many others to run around.  I like to run as completely zonked out as possible when doing these timed runs (of which I have done more than a few) but one cannot do that if there are other runners to be aware of around you. At the beginning of the fourth lap, I hopped into a portapotty and one runner passed me by. I would spend the next many laps running well within sight of this runner (Keith.) 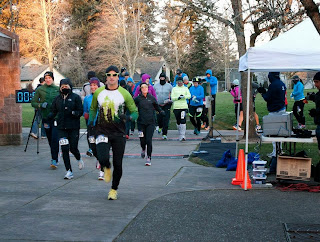 The day did not exactly warm up as much as it got less brutally cold. On the northwest corner of the loop, which stayed in shade most of the day, a fierce wind would whip up. Almost everywhere else on the loop it was not present but knowing you would be diving into the teeth of this brute each lap was not ideal.

Somewhere in the middle laps a fella I had met at a race a few years ago (Jon) went flying by me. I wasn't sure what method Jon was using but he was sure sprinting a few laps whenever he wanted to (case in point: I had the fastest one-loop run of anyone but Jon in 7:02; Jon ran a 6:33!) However, I routinely found myself catching and passing him. I assumed he was taking long breaks to replenish. The thing is, in ultras, it has been empirically proven that great distances can be covered in short periods of time by periodically resting. You might not win or set a course record but it is all but guaranteed you will do well.

Another bathroom break in the first 20 miles meant I was well-hydrated but gripping body parts in chilly weather is fun for no one. As I passed Shannon one time, she handed me two electrolyte pills.  I had been drinking every three miles or so but mostly just water. Actually, ice water, as it was freezing in the cups the poor volunteers were pouring our drinks into, but at least I was drinking. It is easy to forget to hydrate in races where hydration is so readily available.

My plan was to hit 20 miles (21 loops) and take a break for ~ 30 minutes to get some food in me. Around the 11th mile I realized I simply did not have the desire to be out here for 6 hours today. So I would play it by ear. 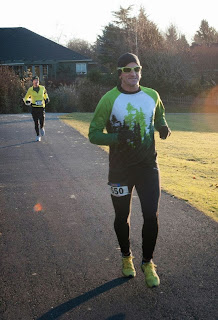 Around mile 18 or so, Jon and I ran a lap or so together and simply chatted. I love how runners can run at a nice clip during the middle of a race and still gab like they are out for a leisurely stroll at the mall. I vividly recall one of my fastest marathons, running with another guy at a very good pace. We passed some spectators who turned to one another and said "They were talking?!" Made us both laugh.

I grabbed some soup which was part chicken noodle and part lava and went to my car to try to stay warm. However, after about 20 minutes of sitting in the car, the heater had barely warmed me and I was chilly. In spite of the temps, I had already sweated enough to make my winter hat wring-out-able. I decided staying put any longer would be detrimental and headed back out. My next lap was the slowest of the day because it included this 20 minute break.

It took me a solid 3 loops to get my teeth to stop chattering. The break to refuel had worked for my stamina as I had badly faded on the final lap of the first 20 miles. Now, I felt much better with regards to both my energy level and the possibility of potentially running more than a 50k. I figured my break gave me little shot at the overall lead and just was doing my best to enjoy the day. Unlike the first 20 miles where I was in my own head, I spent the next 10 miles trying to talk and encourage the runners out on the course. Given how chilly it was, there were few spectators. Plenty of dog walkers (who seemed to have zero problem with NOT picking up their dog's business) but not much else. 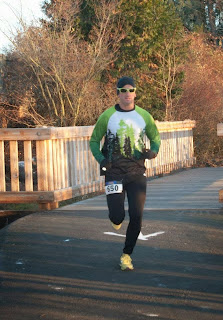 The sun stayed high in the sky and I thanked my Julbos for keeping me from squinting.  They also held my hat tight over my head and when the wind bit every lap, I was more or less bite-proof.

With about 4 miles to go to the 50k, I really wanted a Coke.  Unfortunately, the aid station was out of any soda pop. So I said to myself I would finish 31 miles and either be done for the day or go find some Coke and come back. When I hit one lap to go, I encountered Shannon and I ran with her a little bit. I informed her of my plans and finished the lap. I then hopped into my car parked right at the loop and drove to a McDonald's. There I grabbed a double cheeseburger, some McNuggets, and a big Dr. Pepper. On the drive back I polished off the food in record time.

I parked and threw on a long parka-esque jacket my Uncle gave to me eons ago. I realized just sitting there would make me cold so I got back on the course and started walk jogging a little bit to stay warm. After about a loop and a half, I felt fantastic. The calories from the food kicked in and I felt there was no reason not to run.

I threw the jacket off and realized if I ran 8 minute loops I should have no problem getting in 40 loops for the day. Sure enough, with an 8:32, 8:07, 8:05 and 8:10, I snuck in the 40th lap with 3:10 to spare. That gave me a robust 37.5 miles which was good enough for 2nd place overall. I then went on to cheer the last remaining runners and saw Shannon coming in as well. If she had kept on running at the same pace for another 2.5 miles she would have crushed her 50k PR. As it stood she got 14th place overall!

I ended up with second place overall which was pretty snazzy for a day where I was just testing out my body. This was the longest uninterrupted run in nearly two years. Both my Pacific Coast 350 and Dane to Davenport were usually 25-30 miles before a food break of an hour or two. So all things told, I was quite pleased.

At the end someone said that they were glad I came back and finished. I was a bit perplexed and told them it is a 6 hour race; if you run one mile you have finished it. I understand their point but I found it an odd thing to say. To me, when I was tired and slogging, I saw little to no reason to continue on at a snail's pace. I am not training myself to endure anything for hours on end anymore. I am trying my best to rediscover speed for marathon and shorter. The only reason I came back with six more miles at the end was because the food I ate replenished my stores. This is not uncommon for me and is how I not only ran the two events mentioned above but also my first completed 100 miler at Graveyard 100. I stopped, rested, ate... and blazed out of each aid station like a new man.

We must all find what works for us. I have and it works just fine. Kudos to all those who have done the same.