Since I ran the Run for the Diamonds in Berwick, PA on Thanksgiving, I have been throwing down some seriously high (for me) miles. Taking advantage of a rare long period of time at home, I didn't let the record deluge of rain in Portland the previous few days deter me. If you only run when it is sunny and you feel good, you won't wrong very often. So after 87 miles in 7 days, I took a three day break before this half-marathon in Dallas. I say break but flying, speaking, and driving all over kingdom come is hardly much of a break. But I was hoping it would be enough to help me have a decent hard training run at this race. 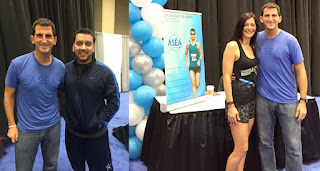 I spoke at the expo both days to share stories about my 52 Marathons in 2006. Was so nice to spend time with old friends and make new ones as well. Part of my presence there was to talk to runners about my recovery, how I physically should not be able to do what I do because of Gilbert's Syndrome, and spread the word about ASEA (a product I have been drinking since 2009.).  The Dallas Marathon was one of the 52 Marathons which has shaped my life and it has been a special race for me. I had a crazy experience in 2010 when I ran it again where I had to help a man with a head wound seconds before the race. Having strep throat during that race made it quite memorable as well especially given the time I ran the race in. So, given all the craziness which surrounded it previously, I was hoping for something a tad less eventful for this race. The weather forecast however said that would not be the case.

Fortunately, while a very heavy rain and wind poured down all night before the race it slowed to a near stop just minutes before we lined up for the race. I wasn't exactly feeling spry at this point but I wasn't feeling too bad. I mingled with the other runners, happening across a few here and there who I had known for many years. One, Jon Anders, I had met at this exact race in 2006 when I ran the 52.  Jon, a few years older than me, is one heck of a triathlete and his son is following in his footsteps.  I wished him good luck and moved to a different part of the corral.

Out of the gate I did my very best to stay to one side. Some young buck had been in front of me before the start, jumping up high and kicking his butt like he was getting ready for the high jump. The guy next to me smirked and said. "I am sure we will see him on the side of the road at the third mile, pulling shorts." I nodded in agreement. In order to stay away from the masses, I stayed out of the middle. Doing so in a race where there are turns or twists and not wanting to run long is hard, however.  I refuse to not run the tangents as a step over the race distance for the day is too far. We all got to cheat a little bit here and there in that regard as standing water in a variety of places made one or two of us have to leap onto the sidewalk and cut 14 inches off a corner.  Don't tell anyone.

I felt decent here in the first mile but it was definitely work. Even in the cool weather with a little bit of rain my entire body felt uncomfortably warm. All I was wearing was my ASEA singlet so it wasn't a matter of being overdressed. When the first mile went by about 40 seconds slower than it felt, I thought Uh oh. The second mile wasn't much better. The third was the same. Yeah, today was going to be petty awful.

As people began passing me in droves, I decided to duck in the bathroom shortly after the fourth mile.  This brief respite only pointed out how tired I was. My breath was ragged and I almost wanted to sit down in the portapotty and call it a day. But I bolted out of the door intent on muscling through the rest of this race. My stomach had other plans.

Less than a half of a mile later, it made its presence known by forcing me to the side of the road and emptying the contents inside of it onto the fine Dallas streets.  Fortunately, I hadn't eaten breakfast so it wasn't much of an art display. But there it was.  And I had eight more miles of this to go.  Ugh.

I knew that the races hardest hills were done at roughly mile 7.5.  Even in my worst state, I can run welldownhill.  All I had to get was to get to that point. Right at mile 7, the young buck I had noticed hopping up and down in the corrals earlier, passed me. I laughed thinking that I hadn't been too far off in my assessment of  how his day was going to go. Unfortunately, right now, it was going better than mine. I decided to put an end to that and surged ahead.

As we made our way through one aid station after the 7th mile, I noticed three women running rather slowly in comparison to other runners.  As I pulled up to them to see if they were OK, I noticed they weren't wearing bib numbers. Apparently they were just out for their Sunday run. Doing so in the middle of the race seemed like a good place as any to get a few miles in.  Don't mind us, ladies.

There was also a relay event going on today which meant occasionally some runner would go flying by making you feel quite unhappy about how lucky they were to just be running 4 miles or so. This first happened around the Turtle Creek area, which was populated with some gorgeous homes. As I have often thought when running through cities with enormous house after enormous house: What in the HELL do you people do for employment?!

Approaching the final hill, which was punctuated by a right hand turn at the Grenada Theater, a scantily-clad female Santa went flying by. Figuring she was part of a relay (I personally think the Ho Ho Hoes would have been a great name) I wanted to see how long I could keep in step with someone going much shorter than me. Suddenly, a fire was lite inside me.

With Ms. Naughty cutting through the crowd, I followed just a few steps behind. I figured within a hundred yards or so she would leave me behind her. Instead, my pace stayed virtually the same. We crested the hill and she put just a smidgen of real estate betwixt us. But I wasn't faltering like I expected I would.  Before long, I saw a group of people who I had been running near before my bathroom and puke break. This spurred me even further as I felt I had new life. Where had this energy been at the start?

At mile 10 where the marathon runners split off from us I was shocked to see most of those I had been running went the longer route. Good for them! If they kept this pace they would all be running 3:05 marathons or under.  (I would later check the results and see that wasn't the case for any of them but they still ran solid times.) This however, left me virtually alone with the next half marathoner at least a hundred yards in front of me. Time to go get them.

Over the next three miles, I didn't let a steadily increasing rain or some gusting wind slow me from reeling in and quickly passing a few dozen runners. Two runners however, unknowingly, let me get fairly close to them but were running just fast enough I couldn't pass them. With one mile left, I had to decide if it was worth it to surge one last time. Why work harder to just get a slightly less majorly dissatisfying time? Well, because it is a race, that's why.  If you aren't hurting yourself, by putting on a bib number you have signed an unspoken agreement to give all you have.

As this one girl and guy inexplicably went wide on a long arcing turn to miss a water puddle, I splashed through. Wet shoes for five minutes are a fine trade-off to not run an extra ten yards.  Now, there were just a few more runners within catching distance. I threw down the gauntlet and decided I would pass them as well.


Coming in under the finish line in 1:33:25, it was good I didn't let off the throttle.  The one girl I had passed inthe last mile must have been sparked and nearly matched my 6:39 pace. Finishing right off my shoulder (a few seconds more than that behind me by chip time) it made for a nice finish picture. Well, for me at least.

I wasn't as impressed with this course and how it was set up as I had been in previous years.  Granted I was walling in a pity party for some of the race but some of the little things which made it great before were missing.  It was not a bad race by any means. And to the countless volunteers who stood out in the elements, my hat goes off to you entirely.

In looking p my lest than stellar results, I was a crestfallen. For the first time that I have ever seen, another "Dane" beat me. I reached out to this Dane and told him I hated him for ever and ever. We are now buddies.

What happened at the start of this race?  I have no real idea. Endurance sports have so many variables that it is difficult to understand when something goes wrong. It is even more hard to explain when everything goes right.  I tell the athletes I coach that you can dissect every race and workout until the end of time but often the answer is "Dunno."

If I can take anything from this race it is how I was able to rally and dig deep. My time was over a minute slower per mile than my half marathon PR.  But I ran with the hand dealt to me, picked up the pieces of a crappy day and put together at least a decent puzzle.  That's really all we can do sometimes and that is just fine and dandy.