Writing recaps for races that don't go well is not fun. But I figured if I just got this one out of the way, maybe, like the proverbial band-aid ripping, faster will be better. (Or maybe that is wrong as Dan Ariely's "Predictably Irrational" makes a case for the opposite. Come to read about an athlete splashing and running; stay for the tangents!)

This was the third time in as many months that I took on the Pure Austin Splash and Dash. (You can read the first and second installments of this race series here and here.) The first event was me feeling out how it was done.  The second was me racing it two days after a half-marathon and one day after a lot of international traveling. As such, this third installment, 10 days after my most recent race, with some decent runs, a bike ride and as close to tapering as I get, felt prime for a big breakthrough. After a 26:02 and a 25:49 in the first two, I was looking to break 25 and start putting in respectable times.

First and foremost, let me mention it was 97 degrees at the start of the race and quite humid. I feel this played a part in my overall race but I am unsure how much. IT wasn't as if, during the race, it felt much worse than it had on the other days which had been cooler.  This is essentially a super sprint distance and it hurts no matter what the weather is for a long-distance runner like me. So, let's just say that the weather didn't help but it wasn't as if it was mile 22 of a marathon and I needed to be put in an ice bucket or die kinda feeling.  That said, as I positioned my gear for the transition I sought cover under a tiny tree. This was almost out of habit than necessity as I didn't feel particularly hot. Maybe I am getting used to Texas heat. (Ha! No way.)

I waded into the water and felt not even a hint of shock from the cold which wasn't there. One thing for sure was this was going to be a warm swim. That means sluggish. I see now from looking at my records I have only done two swim workouts since my last aquathlon a month ago and one was the day before the race.  That is not the way to get better, Dane.

When I won the Masters division of this race in my first race in the series, I won a pair of googles.  Starting this race as far away from the other swimmers as I could, these crystal clear googles allowed me to see that the buoys that we were supposed to keep to our right, had a rope between them. I had never seen this previously and for the first 50 meters or so thought maybe I had found an ideal way to swim without needing to sight, and not swimming off course.  Unfortunately, this rope soon descended into the depths of the quarry soon after those first 50 meters. Hopefully, the little fish that had been nibbling at my feet at the start of the race followed it away from me.  At least I hope it was a fish. It was a bit unnerving as the nibbling happened on five separate occasions even though I kept moving. I wonder if it was attracted to my socks. (Yes, I wear socks in tris for a variety of reasons, explained in the other recaps.)

With the rope gone I had to contend with my own attempt at straight line swimming. While the field was less for this race than the previous race (51 vs 54 finishers for men) it was still a bit crowded.  I did a decent job of making the first two dock turns and staying on line.  Then I started swimming like a drunk person. I couldn't keep a straight line at all. Nevertheless, I felt as if I was swimming strong and thought maybe I didn't need that many workouts after all. I'm Aquaman! 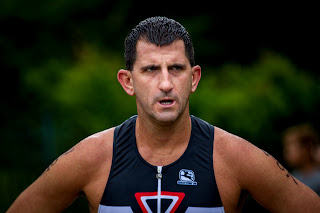 Holding steady with the same few swimmers throughout, I finally hit the home stretch. There, making the final turn, I began to pull away.  I did so with such ease I wondered why I hadn't been swimming harder to begin with.  Happy to no longer be bumping shoulders, grabbing toes or having the same done to me, I hit the sand exit way and scooted over to my shoes.  I expected to have a performance hopefully close to 11 minutes.

I had a less than stellar transition from swimming to running but it wasn't atrocious. Swim time and transition put me at 12:39, however.  Blech.  Something did not go right in that swim.

After racing up the craggy hill to start the run, I had one guy in my immediate sights. I could tell it would not take long to catch him so I just tried to settle into my run and get my lungs working. The race course on this event presents a variety of footing issues from gravel to roots to unkempt branches. Throw in the fact it is not a closed course and other runner are on it and it is not ideal.  I have no idea how they are going to handle the National Championship race here with a mass start of runners.It is narrow and there is going to be someone who goes down hard, mark my words.

I passed the first runner before even a quarter of the way through the first lap and then promptly twisted my ankle. It was one of the twists I have done a million times and either I have Gumby ligaments or cat-like reflexes.  My point being that within 5 steps it didn't bother me and I was on my way.  There is always that split second when I do this where I wonder if I have shattered all my tendons and then miraculously trying to figure out how I did not. About halfway through this loop, with two other runners in my view, I heard footsteps. Two much younger chaps slid by me like a hot knife through butter. I was not expecting that, this soon.  Crap.

As we made our way up the small rise, I passed another runner and grabbed a glass of water. I knew it was hot, I knew I wasn't running great, but I had passed two guys in a loop. Who knew what lie ahead. My time for the loop was 4:27.  The previous two races were 4:24 and 4:28. For some reason I had convinced myself I had run a 4:20 on these the first two times. I shouldn't have let it bother me but it did. I am unsure what or how the rest of the race had unfolded if I realized I was just a few seconds slower than my fastest start but alas.

Starting the second lap, I got about a quarter of the way through when I was in position to pass a third man. I did so and about 100 yards later almost took a water bottle to the face from some pedestrian gesturing loudly with her hands while she chatted on the phone.  I was almost certain a hipcheck would have sent her safely into the water below and she would not have been able to identify who did it. But I wasn't 100% sure so I abated.  My second loop felt like death warmed over and a 4:36 showed it. (A 4:25 and 4:23 had been my second loops previously.)

I started the third loop and I was ready to be done. I knew I wasn't going to get anything I wanted today and it was time to be finished.  About halfway through a female runner passed me.  I recognized her as one of the local tiny, young phenoms. I was trying to figure out what laps she might be on. I thought she had one more to go as the females started three minutes behind us. I had previously just barely beat her in the first race so I respected her as a competitor regardless of age and gender. But as I figured she had one lap to go, I wasn't in any frame of mind to duke it out with her here. Then, doing math, I realized this had to be her last lap.  However, even if I outkicked her, that just means I beat her by three minutes (my head start) minus my time to the finish. I saw zero reason to push faster and let her run by herself. I crossed the final lap in 4:30 finishing in 26:13 - my slowest of the three yet.

Even though I finished 16th overall (12th male - the other females who were faster luckily didn't lap me and crush my soul further) I was the fastest Masters - courtesy of the other old guy in the group ahead of me finishing second overall.

This was disappointing race.  Hot weather, twisted ankle, blah blah blah.  It just did not go well. But it solidified in me that I absolutely must get back into the pool putting in 10,000 yards a week at least if I want to be back to a respectable time. I have a feeling my running will dip a bit this summer but it is just too damn hot in Austin to do the running I want to do and with no running goals on the near future, it is time to focus more on what I have on the race schedule. So today, the doctor has ordered up 3-4,000 yards at the pool.  Hopefully it will be the right prescription.