It can be difficult to try to run two races in the same weekend. When they are in different countries, it is even more difficult.  However, when the opportunity arose for me to be part of the Cooper River Bridge Run, even though I was schedule to run the Around the Bay 30k in Hamilton, ON, the day after, I made sure I could do both. But not without some tiring travel.

Suffice it to say it took a great deal of finagling and effort to make all the flights work for this trip and not make it too pricey. I am still holding out for that Sugar Mama so I don't have to worry about prices but I might be about 20 years past that expiration date.  Once in Charleston, I was reminded how wonderfully tiring working a book signing for two days (one of them being a 12 hour day) can be. Fortunately, I know ahead of time, I am not built for fast 10ks, even if properly rested. With an 18.6 mile race the next day, I knew I could keep my hopes low for this race.

Weather for the race was projected to be rather ideal. The morning of, after the previous day's rain soaking the area, proved that forecast right.  When the gun was fired, the temperature sat at 41 degrees. I was seeded right behind the elites in the sub-40 time group, something I have easily done in the past but was unsure of today.  In that group were friends I knew already, like Meagan Nedlo who was featured in my new book with Lacie Whyte, Running With The Girls) and some new acquaintances as well. My goal was to run around 6:20 per mile which would put most of them far ahead of me. I was fine with that.

As this race is going to be part of a new book I am in the process of writing, this won't be the longest of recaps. Instead, I will focus a little more on my own experience.

I went out with two new friends who were expecting to run in the 38-39 minute range. Immediately I was reminded that while I am in the best shape I have been in the past few years, I am still working back to "good shape".  Hitting the first mile in what felt like a 5:50 and seeing only a 6:15 made me realize that my goal overall might be ambitious, especially given this wasn't even my "A" race of this weekend. 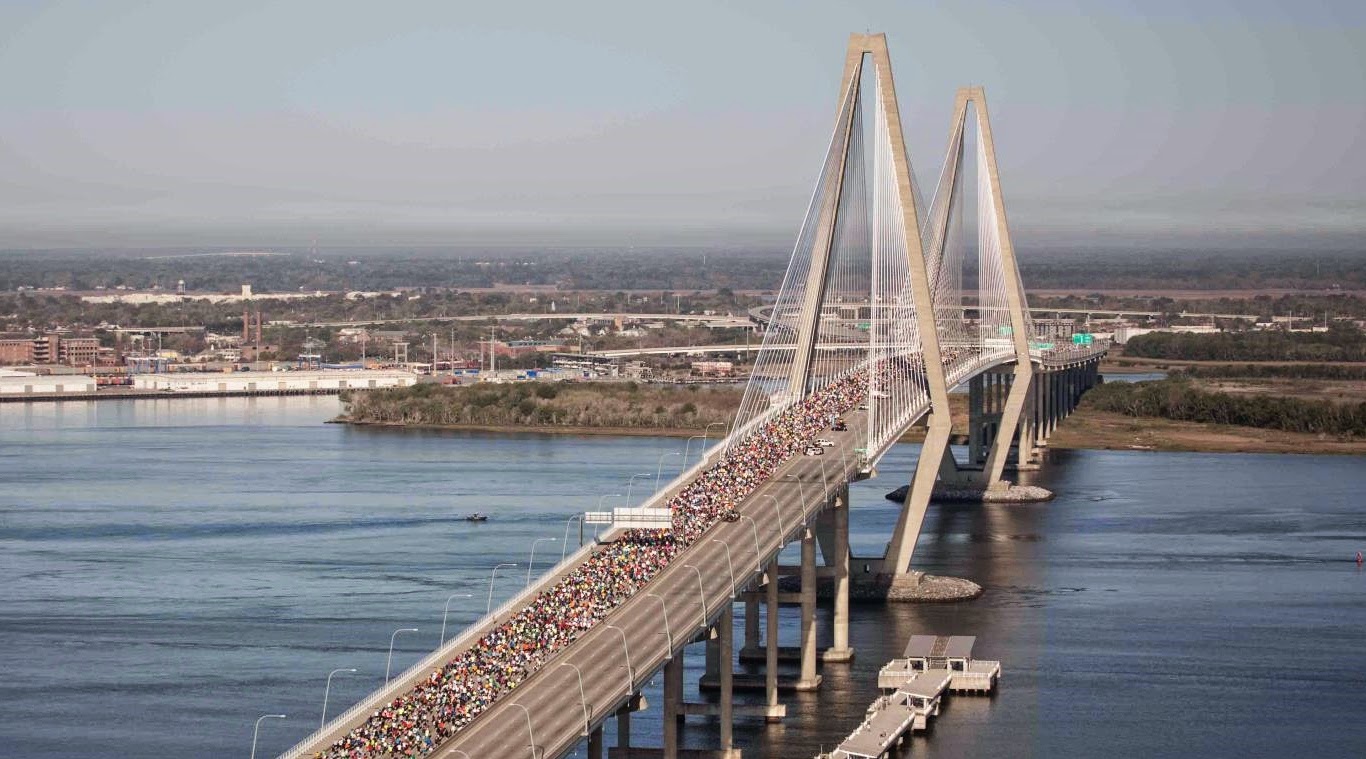 Up ahead, the towering suspension of the Arthur Ravenel Jr. Bridge (AKA "Cooper River Bridge")
beckoned. I asked Danielle, one of the new friends I was running with and who had run this race last year, how hard the hill was on the bridge.  "Hard," she said. I took that to heart.

Designed by  Parsons Brinckerhoff, a name that seems completely made-up, the bridge began slightly before the second mile. Being able to see the top of the bridge, it didn't look like it would be too long of a run up the hill or too hard. That thought was rather incorrect. For over a mile we climbed and never being a strong uphill runner, I assumed tons of runners would pass me. Not nearly passed me as I did but I knew I was hardly tearing up the hill. A headwind on the bridge, which made the local news race report which leads me to believe it was at least a little unusual, didn't help.

My over 7-minute mile told me this was going to be far slower than I was hoping for.  I did, however, remember to at least look around when I got to the top and enjoy the view. It was a clear day, sunny and I can't imagine there is a better vantage point in the entire area. I normally don't give a hoot about "scenery" when I am racing but this one was pretty dang wonderful.  But now back to our normal scheduled suffering.

Finally cresting the bridge was a relief but not the large exhale I was hoping it would be. I was able to feel a bit more comfortable and was happy to see the downhill portion of the bridge.  By now, however, I was more than holding back. I tend not to think ahead but my mind was now on the 30k in Canada the next day. There was no point of killing myself, even for 3 miles, to still get a subpar time in this race, basically leaving me worthless for the next day.  I zoned out for a bit as a few friends slid a bit ahead of me. My 6:21 mile surprised me pleasantly, regardless of the downhill portion.  I briefly considered revising the exact notion I just posited about reserving energy, as one often does when they feel good. I knew however that would be a fool's errand and simply settled into the race. 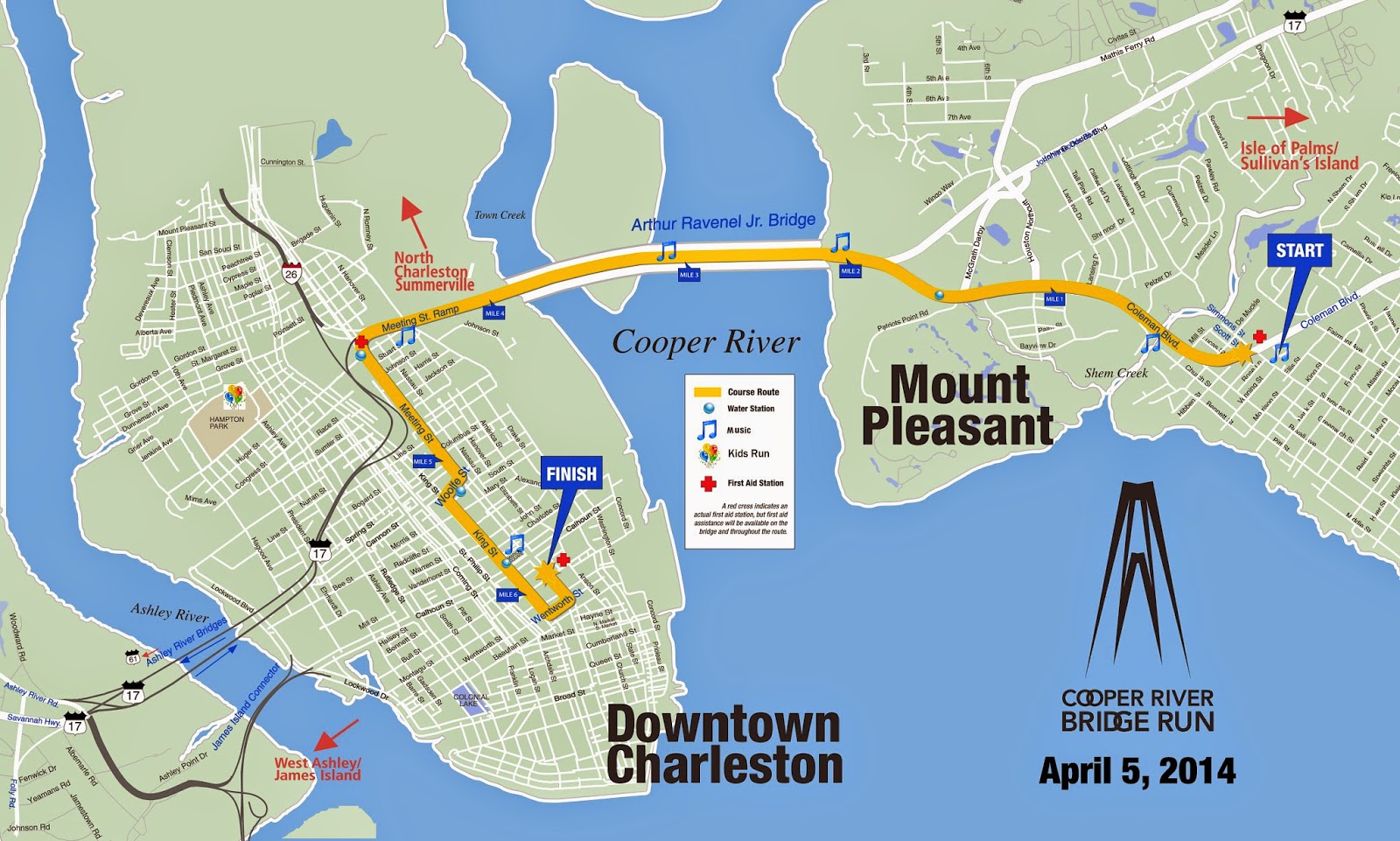 With the bridge behind us, I knew we had nothing but flat running left. The sun was bright and keeping us warm even in the coolness of the day. We were flying down Meeting Street and I could see the flag for mile five approaching. I had a young gun next to me who was undoubtedly using me as his barometer. On numerous occasions, he had gotten a distance in front of me, only to fall back and line up even with me.  My own race now of little consequence, I was curious how tied to me he was. I began throwing little surges here and there and he would hang with me every time. I am sure if there is a picture of me during this time, I was smiling. He had no problem letting other people pass him but it was like "Not THIS guy!" Again, I had half a mind to run a ridiculously fast last mile to see if he wanted to come with me.  Then I realized I have never run a ridiculously fast mile ever so bollocks to that idea. 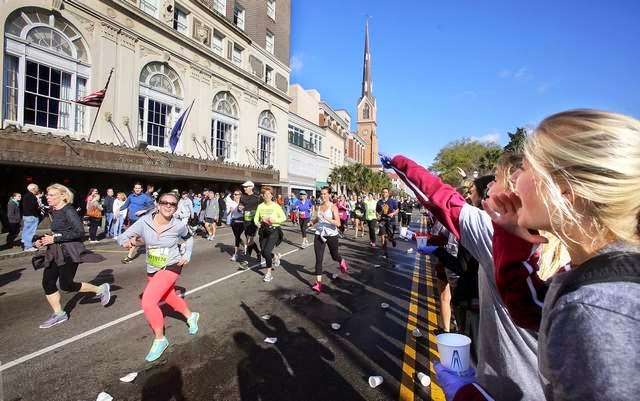 The last mile is where the party really began with the crowds. The streets of Charleston narrow and the crowds hug in tight.  My young assassin finally began to put a little distance on me and I began doing math.  I realized I was definitely not going to break 40 minutes and I had messed around long enough that I might not break 41. Crap. There is a difference between running a relaxed hard pace and throwing in the towel.  I had not meant to do the latter.

As we passed by the finish area, tantalizing us from two blocks to our left but half a mile from our finish, I
picked up the pace again.  At the 6th mile I knew it was going to be close to breaking 41 minutes. I closed the gap on more than a few runners including the young blonde rocket but the gap had gotten too big.  In fact, according to my watch, as I crossed the finish, I also ran myself out of an acceptable time as well, hitting 41:00 on the nose. (According to the official results I ran a 41:02-crap.)  OK, this is not "unacceptable", especially given the headwind and the bridge but it wasn't what I was expecting.  I did place 283rd overall out of 27,342 finishers, which isn't horrific. I also finished 30th in my own age group which tells you something about how many fasties were in that group.  Or how slow I am.  Let's go with the former.  It helps my sore ego.

The race itself, however, delivered what it promised. Logistically, there are far easier 10ks to run out there.  There are far faster 10ks to run. But not all races are run to see if they are the fastest. Some are must runs.

The Cooper River Bridge Run is one of them.