That is the sound someone makes when right as they are about to upload 30 different lap splits to their computer they delete them instead.  That might make this recap a little shorter. 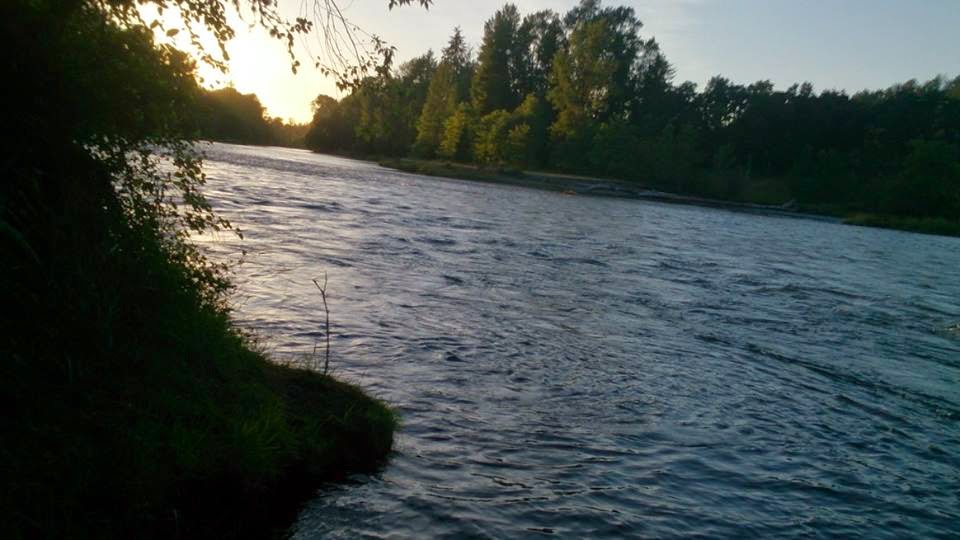 The Elijah Bristow 6 Hour Race (and 12 and 24 hour versions) all took place around a 1(ish) mile trail in the Elijah Bristow State park just a little south and east of Eugene, OR. Mostly shaded crossing within feet of refreshing river/reservoir/babbling brook. (If there had been a little easier access to the water I am sure I would have jumped in it at some point! ) A first time event, with a grand total of about 40 athletes, it was nonetheless very well-run, both literally and figuratively.

The set-up was simple: with one aid station containing a large assortment of beverages and foods (standard fare for an ultra), runners would run around a forgiving trail for a designated time in order to see how far they go.  If it appeared they would not finish a complete lap, they were giving a marker to drop when they heard an airhorn so that their exact distance could be measured.

My plan for the day was to take part in the 6 hour event but to do so in basically two separate runs.  By this I mean I planned on running for ~20 miles, breaking, then running again after ~90 minutes of break time to see how much further I could get.  the purpose of this was to have two hard runs in one day, both of distances I normally don't run without competition.  The break was designed to give me enough rest so that I could indeed run hard for both runs and I wouldn't be doing the death shuffle at the end, more or less walking miles to pad my total.

As the day of the race drew nigh, and the weather looked a bit warm, my plan seemed to be a brilliant one. I decided that in my downtime, I would leave the park, go back to my hotel, shower, pack my stuff, eat something and then come back ready and refreshed to run again. I am pleased to say that this idea worked like gangbusters and was similar to something I did for another 6 hour run last December.

At the start, three runners shot out of the blocks.  One, Joe Uhan, I had met a few months prior and has a 16 hour Western States finish to his credit.  Another, Beverly Anderson-Abbs is a Canadian national record holder.  The third I did not know but was happy to let go as well. I had no intention to compete with any of them regardless of what race they were running (all started at the same 9 a.m. start time. Personally, while I like sleeping in, a few less hours in the heat of the day would have been appreciated.) Before the lap was over another female runner slipped ahead of me, got about ten yards in front and there we would stay for the next four miles. 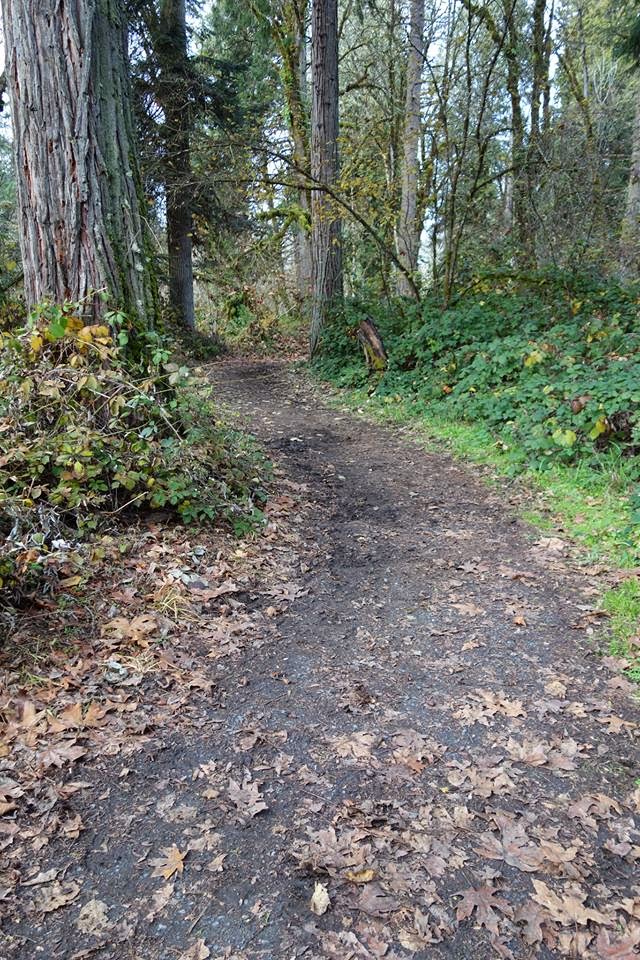 My mile splits were roughly in the 7:30 range which felt good but definitely were earned.  While the loop was virtually flat, it was definitely not road racing.  As soft trail, with oodles of twists and turns and small rises a few times, does not a fast course make, especially when this is what you hit every single mile. There was a good .25 of a mile on pavement that looped runners out of the forest and into the checkpoint every mile that I absolutely loved. After I passed the female runner in front of me (Emily) I spent the next 16 miles basically setting my own pace.  It was a pace that got faster virtually every mile and felt good along the way.

In spite massive amounts of preparation to keep my body properly lubed (I did not want another disastrous chafing incident like what happened at the Windermere Marathon earlier this month) I could feel I was still eating through the protection I had been using.  I could not have been more happy to be stopping at 20 miles, if, for nothing else, to shower and relube.

When I did take this break, the temperature was already 70 degrees and the partly cloudy day the forecast had called for was rapidly dissipating. The trail itself was mostly shaded which gave us a great respite from the sun, but it was far from a cool day.

I hustled to my car to make the 20 minute drive to the hotel.  Pulling up, I saw a McDonald's right next door.  I slipped in through the drive-thru, grabbed a Dr. Pepper and a triple Cheeseburger and devoured both. By the time I was in my hotel room, they were gone.  A quick showering, tending to my wounds and redressing had me grabbing my bags and putting them into the car. Twenty minutes of driving back to the race and an hour and a half had passed. I did some spot-lubing, drank a big glass of water and started running again.

The first few laps were almost a minute slower than what I had averaged for the first 20 miles. I could see that I was not going to get 15 miles in for the second run of the day, as originally planned. Rather, it looked like I might get 13 and I would be happy with that. 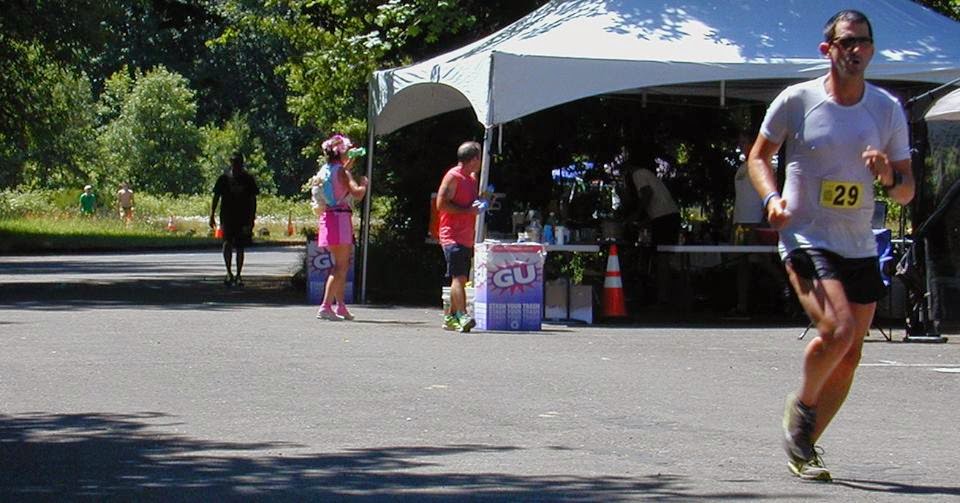 I saw that Joe, the leader who had lapped me barely a hour into the run, had stopped at 26 miles and was manning part of the aid station. Some of the other 6 hour runners looked like they were definitely hurting in the heat. I continued to pat myself on the back as I passed them, knowing I assuredly would have looked even worse if I had stayed.

The trail actually looked different with the sun shining in certain places where it has been overcast previously.  What an interesting perspective light gives to something you thought you were intimately familiar with.

There were, by my count, three small "hills" to deal with each loop. The most steep was right before the runnable road section.  My goal was to not walk up any of these hills, especially the hard one before the road. While many were doing just that in the later stages of the  six hours (and if I had to do another 6 or 12 hours I would have too!), I pleased myself by not once in 30 laps, walking the stupid hill.  But boy did I want to.

When I hit that 30th lap, I knew I had a 50k+.  I had about just enough time in the event to run two more laps, if I averaged like 7:00 per mile. I didn't have that in me. Plus there was no real point. I had come to do what I planned to do and tacking on two more miles would add nothing to the experiment/experience.

If you remove the time I spent high-tailing it to the hotel and back, I was able to complete those 31.5 miles in 4:09. That equals a 7:54 mile which is not too shabby for a training run. I was pleased.

All told this gave me a 81 mile training week.  That is far and away the most miles I have run in a week in 2014. Granted, I have always said that it is what is in the miles that matters more than how many of them there are, but this week it was both.  This was one of the easiest 80 mile weeks I have done.  Throw in the fact that I had to take extended time off to help try and heal the leg issue which stemmed from my bike crash in 2012 and I was elated.  I am not out of the woods just yet. I know the leg/back still require work.  But considering I ran all of 111 miles in the entire month of April, running 81 in one week was a huge victory.
The rest of this summer will be more of the same as I try to run a great amount of high quality miles as I run and race my way back into shape.

Was cool to see bestie Shannon knock out another long training run less than a week after doing a marathon.  all in prep for what is going to be a disgustingly hot 50 miler in Oklahoma on the 4th of July. No thank you!

Kudos to the organizers of the Elijah Bristow series of races for putting a great first year event. Every one of the racers I had the chance t o speak to seem very friendly as well. You might be tired and worn out but it is amazing how you can almost always say "Good job" to someone who has lapped you numerous times.  Even more impressive is when you say it and mean it.

The course was far from tough but don't let the fact that it was virtually flat make you think that it won't behoove you to do some trail running in preparation. Even on what was essentially a buttery smooth trail, the difference between trail running and road running is like comparing apples and rhinoceroses. (Rhinocerii?) But for events of this nature I would give it high marks.
Posted by Dane at 11:38 AM