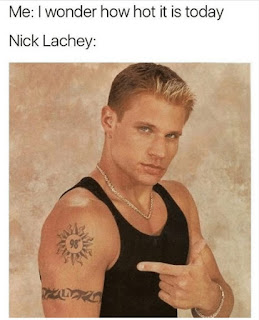 I had set three consecutive PRs at this distance going into this race at I doubted that would continue on this evening as we neared the 6:30 p.m. start time and we were still hovering around 95 degrees. With water temperature at a posted 83 degrees the only thing that was going for us weather-wise was a nice breeze and relatively low humidity.

I had actually hit the pool a few times since the last swim race  so I expected to be a little faster than normal. I decided to push it a little harder this time because I figured I would wilt during the run anyway.

The swim is a clockwise pentagonal shape around five major buoys that is usually rather pleasant. Today wasn't too bad as it felt even a touch cooler than advertised. I found myself right on the tail of a young swimmer who almost has always beaten me out of the swim. In fact, by the time we hit the third buoy I had passed him. I figured I was having the swim of my life. Unfortunately, I brought a crappy pair of googles with me and as we turned and swam into the sun, I had an awful time seeing in front of me. My swim started to zigzag a little and I wasted precious seconds getting back on course. As we passed the final buoy and headed home, I saw I was in front of another swimmer that was normally in front of me. I must be swimming out of my mind.

Getting out of the water, I stumbled a bit putting on my shoes but figured I would be fine. Both the swimmer right in front and behind me transitioned quicker and were off to the races. I crossed the mat to start the run in 12:07. This was my second fastest swim and T1 ever but no where near what I thought it was going to be. These fellas must have been having an off night. All 14 and 16 years old of them. Damn yoots with their skillz. 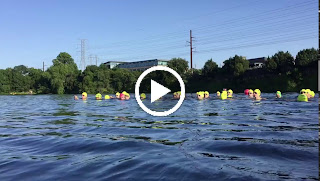 So a little disheartened by a swim a tad slower than I expected I set off on my run. I saw the 14 year old had passed the 16 year old, whom is the one I am normally able to catch on the run. But I didn't seem to have much zip in the legs and as I was indeed catching him, it wasn't as quickly as I liked. The 14 year old began to pull away right when we hit the backside loop hill that I despise. But right then I felt a small slowing in the other runner and began to pass him. Right before the end of the first loop, he was behind me. I hit it in 4:25 which was not bad but wasn't great.

The second loop allowed me to get a glimpse of a new-found nemesis, a perfectly affable young man of 29 named Kyle. Now Kyle had beat me by 4 seconds in the first race of these this year, partly because I hadn't know he was on the same lap as I was and I hadn't kicked it in. Last month I bested Kyle by a time of 12 seconds. So this seemed to be the rubber match. However, throughout this loop I couldn't seem to make any ground on him. I crossed the second loop in 4:27 and figured I would have another slower loop to finish out. I just couldn't seem to find the will to run harder.

Suddenly, Kyle slowed just a touched on the downhill portion and I was just a few seconds behind him. He got mildly caught up in a narrow portion of the course passing runners behind us on their loops which allowed me to turn this into a tactical race. I love "racing" like this. Most of the time I am just pushing myself against the clock but sometimes it is fun to take down runners as well. The problem was I soon on his heels right as we began the backside hill.  I really can't tell you how much this tiny little hill slows me down but I knew I had to keep the momentum and pass him here.

Unfortunately, I made the cardinal sin of passing and I did not do it definitely. Energized by my passing him (Kyle's final loop was 21 seconds faster than his first) he saw me falter ever so much and suddenly had a five second lead on me. As we hit the final homestretch, which is shaded, and slightly downhill (and I always crush on each lap) I now saw he as fading a touch.  But I had given him too much real estate. I narrowed the margin with a 4:20 lap but ended up 2 seconds behind Kyle for 7th male overall. The PR streak ended with a 25:21 but this remains my third fastest time ever of all these races,  with those three all happening this year. 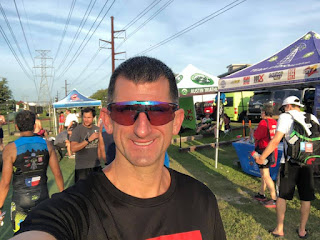 A new community pool is supposed to be opening soon in my neighborhood. When it does, I fully intended to try and re-find my gills and get my swim time down 30 seconds to a full minute. While I will never catch Kyle's brother Kasey, who routinely wins the entire race (with a swim and T1 2:30 faster than me) I should be a bit more respectable. AS it stands, I won the Master's Division for the second time this year and am looking forward to the July edition of this race when I am sure it will be 100 degrees and humid!