I went home to visit my mother, to what should be snowy Northwestern Pennsylvania weather, right before Christmas.  Instead, it was mostly warmish and drizzling. I got some great runs in along the course for the Drake Well Marathon that I thoroughly enjoyed. However, it did not feel or even look like winter without tons of snow on the ground. 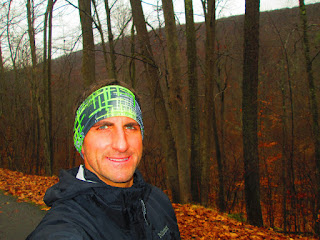 Do not get me wrong, I am not the biggest fan of snow. But I want to see it during the holidays.  It reminds me of my youth and what the months of December and January (and sometimes February, March and parts of April) looked like. So I decided to book a quick little vacation to not only a beautiful town but a place where I could all but guarantee some snow. Starting in Coeur d'Alene, one of the gems of this country, I and my awesome travel partner Shannon, hit the road up to Cranbrook, British Columbia.

Why Cranbrook?  Because it was the closest city of decent size, over the border into Canada where I could get a decent hotel for the night. It ends up that I found a city right near an absolutely gorgeous forest with a well-used but very secluded trail. 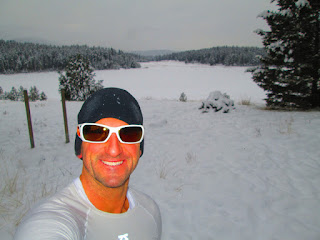 You know you run a great deal when you are disappointed that the main trail is only about four miles long.  I laughed thinking that non-runners would be more than satisfied with that length of walking but as a runner, you immediately go into planning more as to how you can get more. Nevertheless, we found some gorgeous landscape, cold weather and the snow I was looking for.  After that it was back to Couer d'Alene.

After some gambling at a casino near CDA that left a little to be desired (the blackjack tables were electronic - if I wanted to do that I could play at home on the computer) thoughts went to finding a race the next morning. Well, in the next few hours, actually, as it was now after midnight.  As CDA is a great exercise community I was sure one could be found and sure enough the Hangover Handicap Fun Run was the one we chose. The race benefited Tesh, Inc a private, not-for-profit organization whose core purpose is to offer choices and opportunities to people of all ages seeking greater independence, self-sufficiency, and participation in their community - even better. $12 for the registration, no chip time, no bib numbers and just an great overall feeling of runner camaraderie. 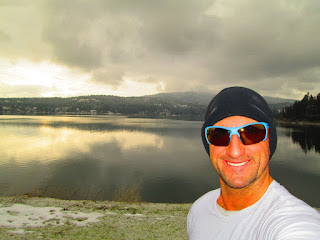 I checked out the course and as coincidence would have it, the race would be run on the exact same waterfront that I had just serendipitously decided to run the afternoon before.  Nestled on the Centennial Trail on the shores of Lake Coeur d'Alene, a simple 2.5 mile out and back was what the race offered.  It also offered some slippery ice along the way and a very deceptive uphill finish, but it was still pretty wonderful.

My goal for the race was to simply start off the year right by pushing myself enough to see how my leg was recovering from running into a fire hydrant a few weeks prior. hopefully this would be a good barometer for the rest of 2013 as I make some transitions into the triathlon word and "shorter" distance racing. The ice on the course definitely made for some tiptoeing and slowed many of us down here and there but altogether the race was divine. Seeing all the runners behind you on this narrow bike path was exhilirating as hundreds of people got out of bed on a cold morning to kick off the New Year. 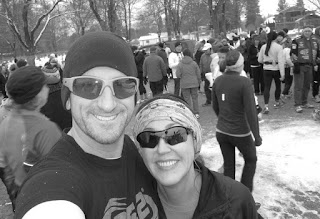 I was fortunate enough to push out a decent time of around 33:29 to finish tenth place overall.  Shannon crushed a personal best coming in right around 45 minutes.  Having never run on snow or ice in her life she was definitely more than a little cautious on some of the terrain.

Within a few hours, I had caught a flight back home to Portland, where 40 degrees felt like summer weather. (The coldest we felt in British Columbia was 9, which to tell the truth, I was a little disappointed with. Come on, Canada!) One day into the year and I had already run a race, flew on a plane and was still going to sleep in my own bed.

As 2013 opens before me, with some pretty epic plans in the works, I look forward to all that is in store for me. Here's to a wonderful year to you as well.