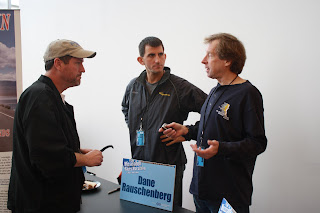 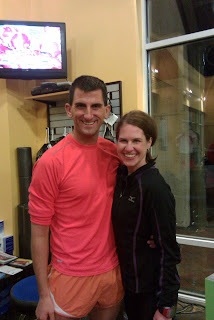 In spite of the fact that I was wearing shorts, it was quite cold in Mississippi.  This would be a theme for the weekend as I was doing my first ever double dose of a marathon on each day - one in Jackson and the second in Mobile at the First Light Marathon (with its own recap to follow).

On the day before the race, Bill and I both spoke to the crowd and I was fortunate enough to be presented with an authentic cigar-box guitar.  Many of the blues artists in the deep south who could not afford a real guitar relied on such products to create their music.  I was extremely flattered to receive such a wonderful memento from the race and now just have to figure out how to convince airport security it is not a weapon. 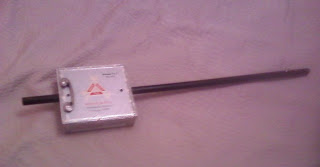 All that lay ahead was running a marathon in what would be easily one of the coldest conditions I have ever attempted. And to throw in the added challenge of running on a challenging course as the Charity Chaser. Let the chasing begin!

As the Charity Chaser, I got to start dead last, let all the runners get a nice big headstart, and then start tracking them down, to earn money for the affiliated charities of the Mississippi Blues Marathon.  With my hotel being less than a tenth of a mile away from the start, and me not needing to be at the start when the gun was fired, this mean I was able to saunter out of my hotel room about 4 minutes before the race began.  With a temperature in the teens, I could not have been happier to oblige. 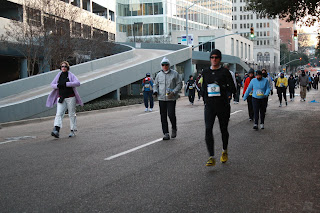 After footage of soldiers in a shadow event of a marathon and half-marathon in Tikirt counted down to the start for us runners back here, I stood patiently by as all 1,500 plus runners took off down the street.  About five minutes later, I followed them.  Twice in the first 10k, I missed mile markers as I did my best to not only pass runners but do it in a respectful way as well.  I may be running faster than they were but it is my responsibility to pass them in a way that shows race etiquette.


Right before the 10k mark, I passed my running friend from DC, Mike Mills, who distinctive running style with his legs splaying outward is easily recognizable.  Mike asked me how many I had passed and I told him you never count your money when you are sitting at the table.  I then had Kenny Roger's "The Gambler" stuck in my head for about 3 miles.


Besides being the Charity Chaser, which means I want to run about as fast as I could, I had a secondary goal of breaking 3 hours in Mississippi. One of my many goals is to run a sub-3 hour marathon in each state and I was lacking in the Magnolia State.  After a bathroom break around mile 7, I was able to get back into the 6:52/mile pace and was feeling surprisingly good, in spite of some of the rolling hills the MS Blues course presented.  As I neared the halfway point, the runners were getting more sparse and harder to pass as the caliber of each runner became higher and higher.

I passed my buddy Sam of Operation Jack fame at mile 10 or so and he said he knew it was me coming up from behind.  Asking why he said that no one would be approaching so fast this late in the race unless it was as relay person.  I bid him good race and continued on my quest. He too would be running in Mobile the next day. 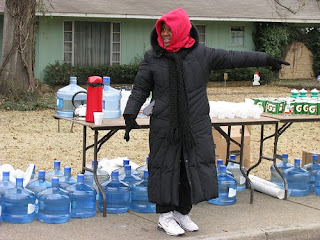 Unfortunately, here was about the last time we would see the sun for the day.  Breaking up the icy grip of the weather, the sun had at least pleasantly warmed the side facing it thus far.  Now shrouded in clouds, the coldness factor set in.  However, the wonderful spirit of the volunteers and spectators still shone just as brightly as they thanked us profusely for "running in Mississippi today!"  A pleasant difference from many races where often residents complain about being inconvenienced for a few hours some Sunday morning, I know many a runner was moved by their cheers, even as they themselves must have been shivering beyond belief.


I hit the halfway point just a few seconds off of my pace for getting that sub-3.

After pushing through a hill where I had been forced to walk last year (granted this hill came 5 miles later on the old course and I was not faring well in the humidity) in a time only 2 seconds off what I wanted, I began to feel some energy in my legs. A new portion of the course took runners through a slightly hilly section but most runners eyes were not on the road in front of them but on the fantastic homes on Eastover Drive. 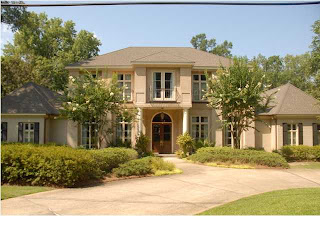 A runner I had been chasing for a few miles finally came within reeling-in distance and I passed him.  Turning one corner quickly, I saw a slate of other runners appear as I neared the 20 mile mark.  In quick succession I passed three, including one African invited runner who obviously was none too pleased with the frigid conditions.  I could see that even in spite of the hills I had encountered, it was quite possible to go sub-3 and have a large negative split for the day. 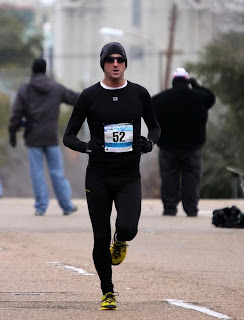 The real test began here with the last of the hills of the already-tough course.  The only problem was that it extended two miles past where we had stopped in 2009.  The knowledge of the course was extremely helpful but not being able to stop where we had before, even though we obviously had not run far enough to do so, played mental games with me.


I knew I had to average 3 seconds faster for this last 10k than a sub-3 hour pace to make up the small deficit I had gained from the previous 20 miles. When I  hit the first mile 13 seconds under, I was elated. Fourteen more seconds in the next two miles and a few more runners on the horizon spurred me on even further.  Not even the last two killer hills could stop me as I again dropped even more time.  Two more runners were passed in the last mile as I continued to pick up the pace. 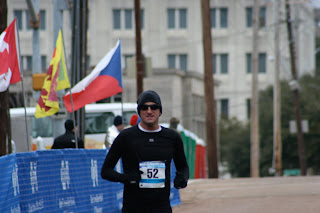 Running one of my fastest last miles of a marathon ever for me, I just missed going into the 2:58 time slot and garnered a 2:59:02 good enough for 17th place overall. All told, I passed 542 or 97% of all the marathoners, got my first sub-3 in Mississippi and my 15th sub-3 overall.

On any day, a sub-3 makes me feel good, especially since I had not had one since my PR in may of 2009. But given this course, these conditions, the Charity Chasing aspect and the fact I knew I was doing it all over again in less than 24 hours, I was elated.


I absolutely cannot wait to be part of the MS Blues Marathon next year and am already planning my calendar to include it.  For a marathon in only its 3rd year, it has tremendous amounts of goodwill, dedicated people behind it and a large growth potential.  They get the little things right and are always working to improve.

Trust me and add it to your calendar.  And while you will probably not get to brag that you survived the Blues 2010 marathon (properly named for the temperatures!) you will undoubtedly make memories to last a lifetime.
Posted by Dane at 11:35 PM

Dane,
i enjoyed meeting you and running with you in Jackson. I think you should add this to your personal best list as "coldest sub-three hour marathon"
Bailey