A last minute addition to my schedule, the AFC Half was a race I ran back in 2009.  Hard to believe it had been four years since I had been there but time really does fly by the older you get. Even though I was signed up to run the race I have much bigger fish to fry in the next few weeks (specifically my Dane to Davenport) so I couldn't let this make me deviate from my schedule to much.. Originally I had planned on doing something close to 18 miles on Saturday and then 15 on Sunday.  So when I changed my schedule to include this race I had to figure out something else.  Fortunately, my host for the week and her friends told me about their running group who were doing anything from 15-24 on Saturday morning. Perfect! 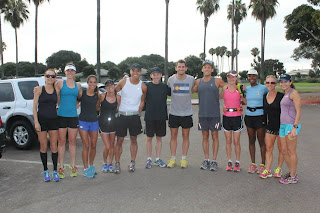 The group was very welcoming with some going for sub-3 hour marathons later this fall, some training for longer events and everyone being quite fast. I haven't run with a group in Portland yet and given my travel schedule when I lived in Salt Lake City I didn't run with my club there as much as I liked but I still remembered the camaraderie of running with people who know your story.  They might not even know what you do for a living or exactly what other aspects other friends know but they have traded sweat on hard miles in bad conditions and someone knows much more about you that way than most others.

The only problem with getting a long run in on Saturday was that I needed to be at the expo shortly after 10 a.m.  I was graciously invited to do a book signing out of the Moving Shoes running store booth, which I shared with running great Meb Keflezighi. Meb is a partial owner in the store and was signing his own book. We spoke very briefly and he seems as genuine and humble as he does in front of the cameras and in interviews.  As I have stated before, often the faster you get, the more you realize how lucky you are to run that fast regardless of hard work and persistence. 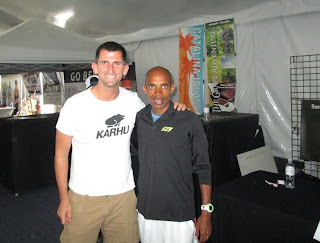 So, while I would have liked to get a few more miles in, the 15 I was able to get was perfect. I figured a nice good paced 15 plus a hard run 13.1 the next day would make up for the small loss of total planned miles.

Of course, even though I ran those 15 miles and got next to no sleep over the days leading up to the race doesn’t mean I still wouldn’t throw logic aside and not want to run as fast as I could. Fortunately, in the race on Sunday it took me only a few miles to realize that I wasn’t going to be running that fast.

Having read my own recap from the race in 2009 I had memorized some of my splits.  I also remembered that while there is a nice screaming mile or so of downhill on this course (that it is well-known for) there is a lot of not so much downhill in the first few miles.  In fact, it is mostly uphill. There is also a rather serene moment that gives you major reflection when you run past a military cemetery.  The white gravestones sticking out of the Earth like teeth is a bit chilling. 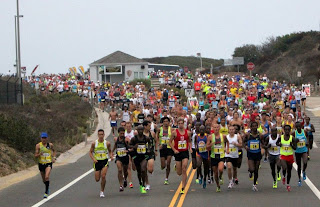 Of course, chilling would have been great, for while it was hardly super hot, it was humid and one mile in I was already quite wet with sweat. A large group of ridiculously fast runners had separated themselves in the first hundred meters, followed by some stragglers and then another large group of fast runners.  A few more stragglers after that and then another third group of runners. I was in that third group for the first few miles.  Then I realized I was pushing harder than I wanted to and was still running slower that I had a few years back and immediately knew today was going to be a slow day.

By the time we approached the first 5k and began the wonderful downhill section, I had already lost 32 seconds from my previous running.  Oof.

With thoughts of running anything close to what I ran previously out the window (and they should have been.  There was no reason to think I could after a 15 miler the day before) I settled into a more comfortable pace. I was still quite happy to get a sub-6 mile on the mostly downhill 4th mile but barely made it under the gun.
Over the next few miles, on two occasions I had runners pass me and then almost immediately cut in front of me.  I have no idea why they did this.  The entire road was closed to traffic.  There was no turn to speak of that would force them to do so.  They just cut in like they were intentionally doing so.  On one occasion I actually had to put my hand in between the shoulder blades of a diminutive runner to keep from tripping both of us.  He never once looked back. I vowed I would beat him.

As we approached the 6th mile, I had completely convinced myself it was the 7th mile. When I found out how wrong I was, I really just wanted to be done. I wasn’t really having any fun and I was sweating and cue the sad trombone. Then I said to myself, “why don’t you just shut up whiny brain and run the race?”  So I did.  I instantly felt better and while I still had no zip, I happily kept up the pace.  Immediately my outlook changed and I began cheering for runners in front of me on the out and back and saying hi to spectators. Sloppy wet low fives were given to children and everything was just great. 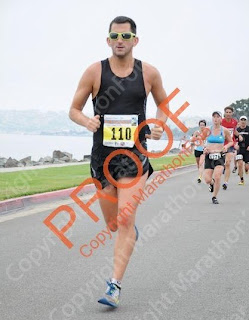 I should have been a little disheartened by how much slower I was running from the previous race but I was more amazed with how I was somehow able to remember all the splits. Around the 8th mile I ran my slowest mile of the day and I said that was enough of that. I had also had a friend I had helped pace to a then-PR in Carlsbad pass me and she was looking strong. Way to work it, Allison.

Around the 9th mile I heard “Dane, you’re an animal!” Sure enough it was one of the runners in the group I had run with the previous morning. and he was passing me having run like 24 miles the previous day!  “No, Jim, YOU are the animal!” He would go on to run a 1:29:13 and almost crack the top 100.

Interesting sidenote: my time of 1:26:05 which placed me 96th in 2009 would have had me at 75th this year. The weather this year was almost identical to 2009 but maybe a little warmer.  That tells me there was a much more difficult field that year that this one., which hurt my ego a bit more on this day.

Around the 10th mile I began running next to a guy I had seen earlier in the race. I noticed him specifically because he went out like a shot and was not a small guy.  By that I mean rather muscular and by no means fat. I see now that Nicholas had indeed done the first 10k in 38:36(!) – over two minutes faster than me.  We chatted for a bit and I found out that he was a Chicago Bears fan like myself and that this was his first half marathon ever.  I told him he was on pace for a great time.  He mentioned he might have gone out too fast and needed to work on pacing.  I bit my tongue and told him few people are very good at keeping a good pace and he should just keep working on it.

We ran the next 1.5 miles together until we hit the dreaded 6th Street hill.  I heard some people bitching about this on forums later and not in the good-natured way. If you don’t want to run a race with a tough hill at the finish, then don’t run the race.  It is not like in its 36th year of running this race this is a surprise. Or that there aren’t elevation profiles available or race reports (like my own) out there.

Nevertheless, I separated myself from Nicholas and would beat him by 34 seconds by the clock at the finish.  However, I need every bit of those 34 seconds as he started behind me and by chip time I only bested him by 4! Way to go, Nicholas. 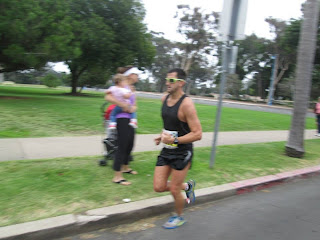 Yet, there was still the hill to contend with before I could be done. As I slogged up this beast passing a few runners here and there I heard my name shouted out by my friend Stephanie.  Stephanie has found me at races in Southern California all the time and here was no different. What was different was that she seemed to have kicked up her fitness to the next level  and ran alongside me for quite some time. I couldn’t talk very much at the time but thanked her later for snapping a few pictures.

Cresting the hill (thank goodness), all that remained was the straightaway over the Cabrillo Freeway and onward toward the El Cid Statue. As we passed through the West Gate into Balbo Park, oodles of photographers snapped away.  I respected them much more than I did the guy taking my picture going up the hill.  It will provide lots of perspective on the hill and the people behind me but I will look like death warmed over.  Here, however, I sucked in the guy and tried to look fast. I can at least pretend for the camera.

I noticed for the first time Allison had come back into view and was just a few seconds in front of me. I had a feeling that even if I did beat her to the finish her chip time would be better than mine.  Nevertheless I pushed it hard for the final few steps thinking we might finish right next to each other. However, about 20 yards from the finish, a big ole dry heave took over my body and I slowed down big time. I am pretty sure 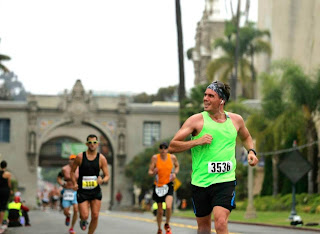 that there was at least one picture of me fake-yakking as I went under the arch.

Final finish time of 1:30:58 was nearly 5 minutes slower than 2009.  I went from 96th place to 149th. Of course comparing years is an experiment in lunacy and I was more than pleased with my overall time.  The race provided more than enough of what I wanted and then some. I met some fantastic people on a group run, some excellent people at my book signing and got in some tough runs on little sleep.  The latter will definitely help with the 150 mile stage run I have in just about 4 weeks.

Wow, your double weekend run is incredibly inspiring. I had a hard race mentally as well but pushed it for my own PR which I was very proud of! carsonfamilyofthree.blogspot.com