As the race started, I had one major goal in mind: hold myself in check. I preach to people who ask for that "one special bit of advice" at my book signings to hold back at the start of the race. I give them this advice because it is prudent but I know rarely does anyone listen and do it.  In fact, when they nod their heads and walk away I think to myself: "That hopeful 10 minute miler is going to do an 8:45 for the first mile."  I wish I could track them to see what they do.

As such, my biggest goal, in this "race" that was supposed to be nothing but a "run"was to heed my own advice. When the first mile went by in 7:34, I smiled.  That may have been the slowest first mile I have ever run of any marathon of the previous 106.  At least I was on track! 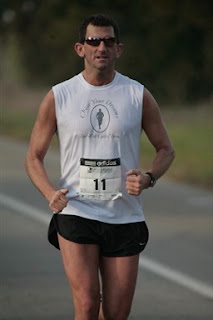 Continuing to hold pace I began to run with one guy, Brian Zant.  Brian mentioned his PR was set at Big Sur (a notoriously challenging course) and was hoping to nail a 3:10 today.  We were soon joined by Bill, an older chap from Alberta who had attended my speech the day before and who was running his first marathon in over two years. Bill wanted to get a 3:20. And I was hoping for somewhere in between the two. Our motley crew was under way.

Whether it was a few misplaced mile markers (likely) or my less than focused mind (maybe even more likely) I missed a few signs denoting the miles. And in spite of my slower than usual pace, I was feeling a bit tired. I bade Brian a good race and fell off his 3:10 pace a bit right before the 10k. 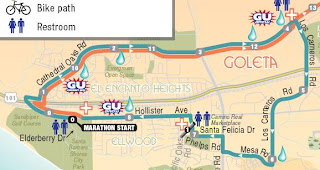 Bill and I were running together more or less stride for stride until nature called and I needed to step off the course. Telling Bill I would catch up, I preceded to use the next few miles to take my time in doing so. I was in no hurry to run faster than necessary.  This is a training run, I kept telling myself. I was doing my best to high-five little kids, talk to people on the course and ask them their goals and encouraging as many people as possible.  For a marathon in its first year, it was both encouraging for the race, and pleasant for the runners, to have so many spectators out on the course. 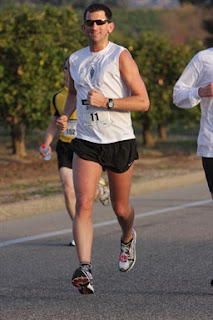 Catching Bill around mile 12 we exchanged a few pleasantries and fell into step again. With the halfway point approaching, Bill said we needed to finish under 1:36 for the half.  So, we sprinted to the arch marking the halfway point as if it was the finishline itself.

Soon thereafter we found ourselves on the prettiest part of the course, running along Cathedral Oaks Road. A relatively flat section,  I could tell this was where I would be leaving Bill as he began to falter a little bit. I wasn't trying to run faster, I just began doing so. Or more accurately, Bill slowed.  At mile 16, taking on a decent sized hill, I saw the last of Bill for the day.


Heading towards a relay exchange, I was joined for a bit by a chap I had spoken to the day before.  He was on the last few yards of his leg and we talked for a bit.  I gave him some advice on how to run the hills we were on, more so for future races than his current leg, and we shared a few laughs. 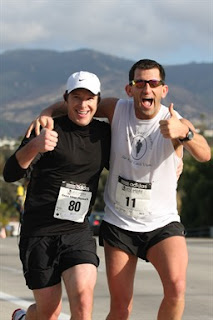 Next up after the relay exchange, we began a few miles on a bicycle trail. I have never really been able to put my finger on the exact reason, but bicycle trails almost always take a little bit out of me.  Maybe it is how they are never closed to oncoming traffic, or how they twist and turn and go up and down very quickly, but a rhythm is always one I find hard to get into as I traverse along them.

Beginning the second to last uphill of the course, I passed a thin blonde runner who I had seen earlier in the race. While maintaining a nice clip, I could tell she was slowing just a bit. I tried to offer some encouragement as I passed her.  Running down the other side of the hill I was rapidly placed in no man's land.  No one was really in front of me to speak to and be entertained and I had just passed any runners who I could talk to and keep from getting bored.  Hopefully something could keep me interested.

As I approached the 21st mile, a spectator cheered out for a female runner behind me.  I was shocked to think that the thin blonde girl had regained her stride and had regrouped given how tired she had looked.  But instead, another blonde woman approached and looked very strong.  Libby was her name and she stated she was hoping to hit a certain time that was right about the pace she was on.  I asked her if she wanted to help in doing so and some company to get her there. She gladly agreed. I now had a renewed purpose and got pulled out of my doldrums. We were going to get a Libby a 3:14.

Passing through large sections of runners, I was flattered to be recognized by more than a few. As we began a nice long downhill, I began instructing Libby on how we were going to attack it.  Ignoring my advice, she said: "How does everyone know your name?"  Wanting her to keep her mind on the task at hand, I simply stated: "I run a lot."  I followed that up with: "Now keep up a quick turnover on this downhill. We aren't even thinking about anything beyond mile 23." 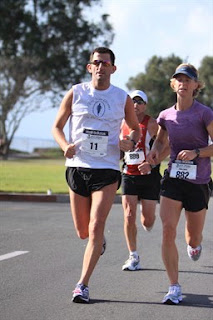 Here and there I would distract Libby with pointing out a runner ahead that I knew we would pass. Soon we did and I could see her mood lift each time, even if her breathing remained a bit labored.  I wanted her in good spirits for the cruelly placed hill at mile 24 on Cliff Drive.  Going up 150 feet in not much more than quarter of a mile, there were times I wanted to get behind Libby and push.  She was not doing great on this hill and I wanted that 3:14 for her so bad.  But soon we crested the beast and the mostly downhill finish beckoned.


Palm trees lined the final mile with the Pacific Ocean providing the backdrop. Picking up momentum, we passed a handful of more runners as time slipped by. I knew Libby had started behind me on the race so she had a few more seconds according to her chip time to break 3:14.  But we wouldn't need it.


To large throngs of people, Libby cut a swath through a few remaining runners while I urged the crowd to cheer for her.  26.2 miles later and Libby and I crossed together under the Finish banner in 3:14:32. 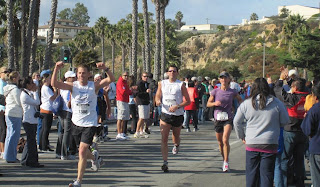 Hugs were shared as anyone finishing a marathon should do with those around them and I asked Libby if this was a PR. "Well," she replied, "it is my first marathon."


Preliminary results show Libby finished 4th overall for the women.  In her first marathon. In her late 30s.  Again, I think I may have been more happy for her than she was for herself.  I got to finish my 107th marathon, get a nice little training run in, and help a woman reach her goal, all under the sunny skies near the beach when my apartment back in Salt Lake City sat under several inches of newly-fallen snow.

Brian fell off the mark after some GI issues and did not get his 3:10.  In his first marathon since Portland in 2007, Bill nailed a 3:30 to start his comeback train.  And I, well, I made some great new friends.


Not a bad way to spend a few hours on Sunday.

Holy crap! 3:14 in a first marathon. I don't know how some people can do it. Im just wondering why, out of all possible times, she wanted a 3:14? Either way, incredibly impressive!

It is amazing how many people can do fantastic first marathon times. Met a guy whose first was sub-3.