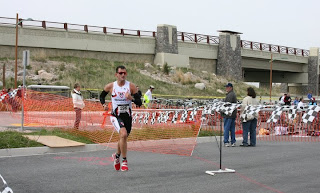 As the race would begin at 7 a.m. and we had to be bused out to the start, it called for one of my most favorite things in the world: early morning wake up!  YAY! Honestly, if there is ever a study which fully explains why some people simply cannot function in the mornings, I would like to take part in it so I can figure out why I love the night so much more.

Arriving at the bus pickup around 5:45 a.m. to catch the last shuttle I saw a long line of people. I found out the buses were running a little behind.  I hopped in line with a friend and tried to kill some time. It wasn't even remotely out of completely darkness yet and it was already 70 degrees. This was going to be a warm one.

Once we were finally on the buses, we were treated (if that is the right word) to one of the chattiest bus drivers in the history of bus driverdom. A stream of consciousness seemed to come over the driver and since she had control over the PA system, we were powerless to not listen.  Every extra sentence about something out in the pitch black which we were supposed to look at or how we were not supposed to forget to check our "shorty shorts" for keys and phones we had on us when we got off the bus, made it all the more hilarious.

While the eventual start of the race would be delayed by some 20 minutes to make sure that all participants would arrive, have time to use the bathroom and get lined up, most of the participants were in a good mood. We would have liked to start before the sun peaked up over the Wasatch Mountains but alas. I had outfitted myself with no only a pair of Julbo sunglasses but my Timex visor. I knew that the vast majority of this race would be running due east - right into the teeth of the rising sun. I came prepared.

One last knock on the portapotty doors by the RD to make sure all were out and we were off.

Out of the blocks, two runners took off. I knew the runners and knew I would not be competing with them today. Adios, fastleggers. The remaining handful of runners, however, I did not know and would spend the next few miles feeling out. 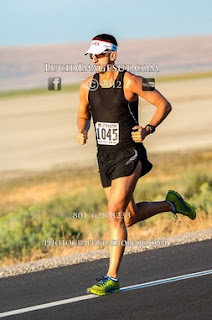 At one point, a runner went blazing out in front of me from behind. I have no idea why he was behind me but I had a feeling I wouldn't catch him. His bright pink shoes made quite a statement. One guy behind me said something akin to "If you run that fast you can wear any damn color you want." I agreed.

My first two miles were right around what I wanted to run for the day.  My third was a bit slower. The sun was fully over the mountains and even though it was close to 75 degrees, I wasn't drenched like I would be in a normal humid place. Having said that, I could tell it was more humid than normal as we ran over the causeway from severely misnamed Antelope Island. (There are no antelope in the U.S., people.  They are pronghorns.  Same with Bison being called buffalo. Just stop it right now.)  I couldn't tell if it was because we were close to Great Salk Lake or if just because it was still August in the high desert and you are going to just be warm. Either way, this heat was going to slow many people this day.

The first four miles were run on the causeway as the sun steadily climbed over the mountains in front of us.  The shores of the Great Salt Lake can be a little smelly but one of the great things about being me is I have next to no sense of smell. It is my superpower. (I think I got shafted on superpowers.)

As we left the causeway, I had gained a little bit on one runner in front of me but could hear the footsteps of another behind me. Even though I felt like I had been picking up the pace over the next mile or so, I was slowing. That runner finally passed me. 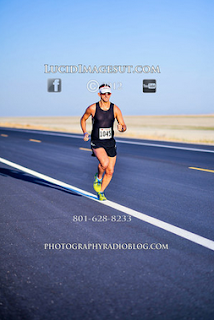 With aid stations every even mile, I would slow a tad on the odd mile and gain a little bit of speed and energy with every drink. There was hardly a soul out spectating but the volunteers at the aid stations were plentiful and helpful. Nice cold power drink and water awaited runners as we continued on what was essentially a very flat course. Not only was it very flat, you also made very few turns. You could see your competitors in front of you even if they were half of a mile away. I like that. It gives me a chance to lock in on someone and do the best I can to reel them in.  I felt good again after slowing down a touch.


I then passed the guy who passed me and set my sights on the next runner in front.

Right after the 6th mile, I took a big gulp of water from the volunteer and felt absolutely fantastic. I ran what was my second fastest mile of the whole race and thought perhaps I just needed the usual six miles to get warmed up.  I passed the runner I had been trailing and could see another run waaaaay in the distance. I figured I might have a chance to catch him.

However, even though I put distance between the runners behind me and seemed to be gaining on the runner in front of me over the next few miles, I was slowing down again. My times again crept up and over seven minutes per and there wasn't much I could do about it. I noticed I was no longer sweating and had dried off  extensively. That is not a good thing. Dehydration had definitely set in.

As we approached the tenth mile I could see many runners in front of me.  I knew these were runners doing the 10k and from here on out I wouldn't be able to use my hearing to tell if someone was catching me.

The course beg an a slight uphill climb for the last three miles and as I made a right angle turn I looked behind me to see if my pursuers were close enough to worry about.

I looked ahead of me at the guy I was pursuing to see if he had to worry about me.

So I was just in this position of being what I thought was fourth place, running a time that wasn't what I want.  Runningwise it was not exactly a good day. But as for enjoying the day, I was.

I used the 10k runners to help boost my runner's ego and energy as I passed them. My 11th and 12th miles were far too slow for my tastes but I wasn't losing ground to anyone. I walked through the aid station and gulped one big glass of water and another of power drink. Within seconds of beginning to run I was sweating again. It was like my throat was tied directly to my sweat glands on my skin. 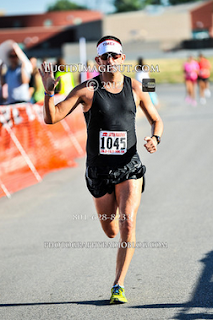 I could see the park finish way up ahead and tried to pick up the pace a bit to get under 1:31.  As the clock came into focus, I could see it wasn't going to happen.  So, I slowed and waved to the cheering crowds who were so kind to be out here applauding all the runners coming in.

I crossed the line in 1:31:35. Within seconds I was handed a printout of my finish time and place. It said I finished third. I couldn't figure out how that was possible. Later, it was revealed to me that the pink shoed runner who has passed me early in the race had been one of the marathoners. Because of our delayed start it had given him just enough time to catch us and go on by virtually every other runner. He crushed the course record in a time of 2:46.  His name is JD Nielson and it was just his second marathon ever. So not only was I happy for him I was happy I had at least snuck in a 3rd place finish.

That just goes to show you how fleeting and lucky "placing" can be.  If just a few people show up who are faster than you, you get nothing.  If you have a slightly bad day, those who are usually slower than you will beat you.  There are so many variables that it is hard to know what will happen on race day. I have won 3 marathons in my life. All three were just luck of the draw. In fact, my fastest marathon win is only my 22nd fastest marathon ever. 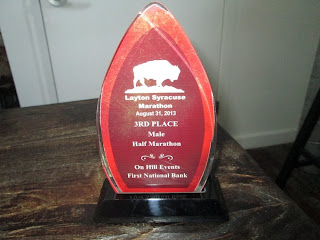 My point is that the race should be about much more than your time and place. It is about what you gain from the experience.  It is about the friends you make and the camaraderie of the day. Sure, running fast is fun but so is realizing how luck you are to be out there on race day.

Cheers for friends, like my buddy Katie Kramer who won the marathon for the second straight year in virtually the exact same time. Or 55 year old Bryan who I first met at the Little Grand Canyon Marathon four years ago and crushed another strong marathon finish. Or all the others I met and hope to stay in touch with as we put more and more races under our belts.

As I go for a new half-marathon personal best this weekend I am going to try my best to remember all of those. I might forget them in the moment but I have a feeling they will come back to me after the race. You know, when sanity creeps back in.