I went to Stillwater on Thursday marking the 6th time I have been to the North Star State in a year's time after having never been there prior to that visit.  I have always had good experiences there even if I haven't had the best weather to run in.  I knew this race was going to be no different given the predictions of high 80s during the marathon.  But one can only run what is put before them and I had a task to do: 34 miles on my 34th birthday.

I had a great time at the expo signing books for friends and fans and meeting wonderful people.  Too many stories to share all of them here but I will just a few.

One young man, Nate Johnson, was in the middle of doing 5 marathons in 5 weeks.  If that is not impressive enough - Nate is 15!  And he usually runs quite fast.  While he had a tough day in the hot sticky weather in Stillwater, he mentioned that his goal is to get a rejection letter from Boston.  By that he means he wishes t qualify and then be told that because he is under 18 he is not allowed to run.  I have a feeling that if he makes it in, they may just make an exception.

One runner put two dollars down on my table and said :" I owe you this."  Apparently he was two dollars short of being able to purchase my book at an expo and I said it was OK and he could have it for the money he had on him.  Well, he told me that if he ever saw me again he would pay me back.  And he did.  Can you see why I trust runners so much?

I had more than a few people say they saw me on the morning news on Saturday as I gave an interview on KSTP's morning show talking about the race and my experiences.  If they only knew how hard it is nor a nightowl to get up at 6:30 AM to get to their studios (let alone the morning prior to a race!) they may have been even more impressed.

Race Day:
My original plans were to run the Stillwater Marathon then go and do another 4 miles back on the course, turn around and finish again for my 34 total miles.  However, when I saw how hot it was going to be, I decided to change my plans a little bit.  I figured getting some of those miles out of the way prior to the race would be a good idea.  You know, when it is only 73 degrees.  Ugh.

I have mad mention of how this year I have had the misfortune of bringing cold weather with me everywhere I have been.  I have rarely experienced a day that exceeded 80 degrees in 2010 (I was running in snow in SLC on Monday.)  Well, I knew today was going to be different, I was in no way going to be prepared for it, but had to do it anyway.

Joining me on my run was my friend Dani Ashford, a former steeplechaser on the Minnesota Golden Gophers track and cross-country teams.  we met at the Twin Cities marathon last year where she ran an impressive 3:03 first time marathon.  Yep, first-time.  Pretty sure I dislike these naturally talented athletes a whole bunch. 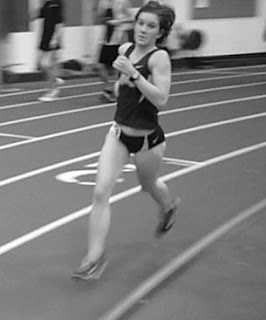 We had a surprising start to the race when the color guard presenting arms fired their guns.  Runners, not knowing it was the NOT the start, surged forward in a Pavlovian response.  Too late to react to tell us to stop, the race organizers quickly started the timers and let the race begin.  Not as much pomp and circumstance as was expected to start the race but a memorable one to begin with.  (Also, far from the only time something like this has happened. At the NYC Marathon in 2006, I remember video of elites sort of standing around when the gun fired. Some were still tying shorts and the like.)

Dani told me she had signed up for this race because I had told her I was pacing the 3:10 group.  that had been the original plan but, well,plans change and I remembered this was a birthday run for me and wasn't sure if I would be in 3:10 condition post running 202 miles at the American Odyssey Relay.  I felt bad but told her I could probably take her through the first half close to 3:10 or 3:15 pace and then we would have to see what the rest of the day was going to be like.  As we neared the 10k mark, I could tell this was going to be a long day, even though we were still right on pace.  When I had to ring out my wristband of sweat and it sounded like I opened up a bottle of water, Dani looked over with both awe and revulsion.  Wish I had got that on tape.

Some nice flats and downhills allowed Dani and I to run a few quicker than expected miles.  We had a tailwind which was nice but a cross-breeze would have been more welcome.  I told Dani on more than one occasion that I had no problem at all if she left me behind in the dust.  I had four more miles to do after the marathon and was in no hurry today.  My original plan of running 3:15 was quickly being amended and I did not want to hold her back.  She said she would see how she felt as the day went by but appreciated the knowledge I had about the course having run it before.  I think she just likes being sweat on by guy's carrying a video camera.


In spite of the heat, and some lonesome roads, spectators were again out in force.  I heard people saying this was a hilly course and after two year's of running it I would have to disagree.  Sure there are some hills in it and it is not pancake flat but I think more than anything the elements played the biggest role in how hard people perceived the course.  Plus knowing a little about the area and how many other hills could have been on the curse and I guess I felt it wasn't too bad at all.

As we moved along, we tried to figure out where Dani was in the female placers.  With many other races going on, it was quite difficult to tell who was doing what from behind.  When you passed them, the different bibs would give you a clue but for the time being we knew she was at least in the top five.

The miles began to slow just a touch after the halfway point and it was definitely my doing.  I knew the tank was dangerously low and it was not getting any cooler. A starting temperature of 73 degrees was quickly rising and as most of the course is without shade, there was little relief.  As Dani and I rounded the turn to run near the gulf course, I looked down at one of the well-manicured laws and said: "Hey look, a snapping turtle." About 10 feet away, a momma turtle was laying some eggs in a hole.  On an earlier run on Friday in another part of Stillwater I had seen a similar occurrence.  Not too often you get to see snapping turtles in a marathon!

At mile 20, I told Dani we simply HAD to walk through the aid stations to get fluid in us.  I don't think she minded too much.  With all of the hills behind us and nothing but flat or downhill ahead, I was hoping we would be rejuvenated.  Dani was.  I was not.  In fact, the only thing rejuvenated was the extensive chafing in my shorts.  As Dani decided to test her wheels in the final four miles, I was forced to stop at a medical station and with two handfuls of Vaseline, lubed the heck out of my nether regions and waistband.  Immediate relief helped me finally run a decent mile again, posting an 8:13 even with the stop to JiffyLube my undercarriage. While 116 marathons have not helped me find a way for my body to run better in heat, those races have allowed me to know what I need to do to keep myself upright and moving.

And moving I did.  While I most assuredly was not enjoying myself too much in the stickiness I steadily was making progress. Crossing the finishline in 3:24:26, which just happened to be my 92nd slowest marathon ever, I had steadily moved up throughout the day from 32nd overall to 19th (And perhaps higher.  The starting gun snafu gave the race directors a headache with the results and they are trying to sort them all out in due time.  I am also pretty sure Raymond Mitchell is not a female as well.)  Dani ran a stellar 3:21 for fourth woman overall.  Inexplicably, the top two finishers both ran under 2:46, which, on this day, on a course that while not hard is not easy, was quite ridiculous.  Kudos to Tom Tisell and Joel Reese (whose wife Liz ran her first marathon ever in a great time of 4:02!) as well as last year's winner Pete Hoyem who finished out the top three.

As temperatures reached well into the mid 80s, the race directors had to cut the race short for a few runners.  While I am sure they were unhappy with that decision, I hope they realize that it was in the best interest of all.  There were a few people taken into medical care and others who looked like they needed it, but it appears everyone came out all right at the end.  As we sat around talking at the awards ceremony we all said it is the races like these, not the ones with the personal bests on perfect days, that make for the great stories down the road.  Was it fun when you were running in it?  Nope.  Is it going to turn into a greater story when you recount it to friends and family over the next few weeks? Yep!

So, while the race did not go exactly as planned for just about anyone, I was able to make the wise decision to postpone my 4 miles post-marathon to be done when I got home to Salt Lake City later that night.  The 48 degree chillier air of SLC felt so darn wonderful on my skin.  Well, except for where I was chafed.  That will take a while.

I (Jeff Carver), had a chance to meet you this past weekend at the Stillwater Marathon. We spoke about my 13 year old son Hayden (aka HD) who decided in January to train and run Grandma's Marathon this June. As the story goes, we weret alking about races to do this summer when he came to visit me. He mentioned that we should run the half at Grandma's. When I explained to him that it was a lottery and we may not both get drawn he said, "Okay then I will run the Marathon with you." So we signed up and training began. As HD lives with my two other sons and daughter in Idaho running and training with him over the phone has given us something in common to talk about. You mentioned you wanted to speak with him and he can be reached at ipod3434@gmail.com. My email is jkcfarms@gmail.com. We will see you in Duluth in just over 2 weeks.