Any layoff from any activity will make one rusty.  When it is a forced layoff and in the interim you aren’t even allowed to practice, the rust could be inches deep. That was what I was fearful at the Canton Marathon.

First and foremost, there was no way on this pale blue dot that I was going to be able to run the full marathon. In fact, even pre-accident I had not intended to do so.  You see, we had something planned. Now, I have a habit of using the word “we” when it is often just me. I did this with my 350 mile run in Oregon because for me, my crew was just as much a part of me completing the task as I was.  But in this case, the “we” really was more than runner. You see, I would be joining a number of other runners from Ohio to take part in this inaugural running of the Canton Marathon by teaming up to form three different relay teams. 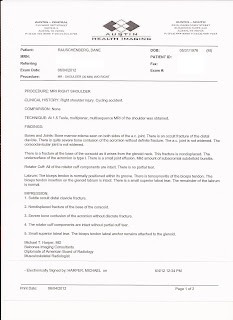 Originally, I had been planning to run the first leg of the first relay, biking to the transition phase for the third leg, running that leg, and then riding another bike to the 5th leg starting point to run 3 legs on three different relay teams. That idea was put on the back burner with one tumble over the handlebars. Not only would I be unable to do so because of my shoulder injury, my lack of exercise in the past month had made it almost impossible to think about running more than 5 miles. But as race day approached and it had been basically four weeks since I had attempted to do anything resembling a hard run, I knew I would give my absolute best. I had a team relying on me, multiple shoulder breaks and lacerations be damned!

This team was Team Beef, put together by the Ohio Beef Council. All members proud to fuel themselves on lean beef, the fifteen of us were rip roaring ready to go. A few days prior to the race the forecast looked to be quite non-too-pleasing. High humidity and temperatures predicted to hit 90 meant that there could be some trouble.  The Canton Marathon people reacted quickly and let many runners either switch from one race to another or defer their entry until the next year. At the expo itself, it seemed many were taking one of those two options. Regardless of whether runners should or should not take the option, the fact they had one shows some foresight on the organizers of this first-time marathon. That bodes well for the future. 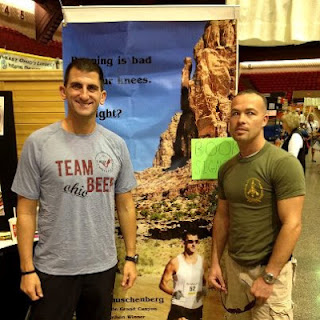 I spent my time signing copies of my new book at the Ohio Beef Council booth, meeting and being inspired by oodles of runners. At the pre-race dinner I gave a speech to a group of people who turned my usual half hour speech into a full hour-plus of Q&A, insight shared and given and a general wonderful time had by all. I had gingerly shook hands all day as my shoulder was feeling better, but I was still quite trepidacious about what it could handle in the vigorous-shaking department.

After the expo, I was treated to a fantastic sirloin steak. I got the bigger than usual portion simply because I was “just” running 7 miles the next day and not 18 or more as originally planned. As such, I didn’t mind having a little more fuel in me than normally needed.  To be honest, I was even feeling the butterflies. The last time I had run with any purpose had been four weeks prior at the Green bay Marathon – and we know how that turned out. I was anxious and happy that, as the last leg of the relay I would not have to be at the starting line at 6 AM. Nothing good ever happens at that hour.
Race Day:

A funny thing happened on the way to microwaved doom – the weather did not show up. Somehow during the night, the temperatures dropped, the sun snuck behind clouds and overall it was generally pleasant.  Not perfect weather for a marathon like one news story reported but not too bad at all. By the time I was showing up at my relay station, the weather was actually half-decent. However, as the day wore on and it went longer than it should have given the start of the race was delayed for 15-20 minutes (due to some reason unknown to us) we actually saw storm clouds approaching off in the distance. 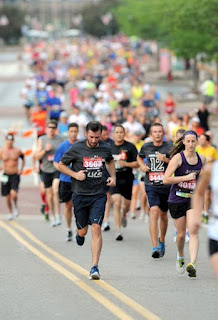 As first the marathon runners themselves passed by and then some of the very fast teams, I was beginning to worry about those dark clouds.  Would this be the third race in a row I was at which was affected negatively by weather (Green Bay Marathon was canceled and Boise 70.3 was shortened due to cold temperature, wind and rain.) However, with my team approaching in the distance, I began focusing on a more pressing issue: how was month off and about 10 extra pounds (or more) going to affect my overall performance.

Once I took the baton/slap bracelet from my teammate the game was afoot. All I wished to do was give my all and hope that my all wasn’t too shabby. Immediately we began climbing what would be the theme for the remainder of the 7 miles: hills. I did not run the other portions/legs of the course but I do know if they were anything like this part, this was one tough marathon.

For me, I just wanted to plod forward the bet I can. For the first four miles I did just that, hitting sub-7 minute miles and shocking myself.  Each mile felt like it was taking forever but here I was running far faster than I expected.  Then the deluge hit.  Most people had been concerned about high temperatures and humidity.  Instead flash floods almost became the big news of the day. From mile 24 to mile 25, anyone not completely under a roof or tree was getting soaked. Then, just as quickly as it hit, it was gone, leaving drenched masses, only slightly cooler than they had been five minutes prior. 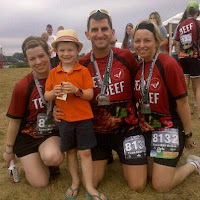 When I run a relay, I always feel bad for passing those who are running a longer distance.  I do my best to give them words of encouragement and not linger too much by their side when I am passing. These are people who have run probably 20 more miles than me. That said I was using every person in front of me in my ole my lasso mind trick game.  Throw one around a runner, pull him in, then do it all over again.

Suddenly, with .2 of a mile to go, I saw lightning and heard thunder.  I picked up the pace significantly, not because of fear but because I refused to not officially finish before the race was called! I finished in a time of 49:13 or just over 7 minutes per mile.  If I had been paying closer attention, I would have made up those seconds to finish under 49 and get a nice 6:59 per mile pace for the comeback run. All told however, I was very pleased. 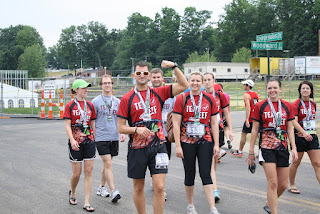 My team finished 30th out of 184 teams that completed the race. The other two Team beef teams had great finishes as well.  Afterward, as we walked back to the Team Beef tent, we sort of looked like the post-café scene from Reservoir Dogs.  Soon we had a contingency of people following us because they knew that was where the beefy jerky from Andersonville Farms was located. The three heaping piles of beef jerky were gone in record time as runner after runner helped themselves to nature’s protein snack.

Now begins a brief respite for me as I back up my apartment, move to Portland, Oregon and try to both heal my shoulder and get back into shape.  I have two months until my next event and here’s hoping the recovery goes smoothly. I am off to a great start!

Dane, sorry to hear that the original plan didn't work out. Sounded like a cool idea. But glad to hear you were able to at least run one leg of the race with Team BEEF. Thanks for helping spread the word about the importance of beef in providing fuel for the finish!

Good luck in your move and healing process. Don't over do it.

Nice summary Dane! It makes me feel good to hear you say this was a tough one. I finished with a 3:24:56 (6 seconds slower than my PR in February), which I'm pretty happy with considering all of the hills in the second half! I'm still dreaming of that 3:04 I need for Boston though... :) Good luck with the shoulder recovery!