This is definitely not a recap concerning my effort in the Pikermi (otherwise know as half-marathon.)  Because it was the first official "Pikermi" (if you are confused, read more here) I simply had to take part in the race as a participant. As soon as I finished the race, I planned to jump right back into my duties of assisting the Titusville Leisure Services in directing the race I helped create a few years ago.  By running the Pikermi I could see first-hand any potential problems which may crop up.  So, I did finish second overall in 1:29:36 to a stellar 1:21:01 running by Ben English but this race, and the marathon, belonged to so many others.  I am going to try to touch on more than a few of them here.

* Hats off to Justin Gilette, Lori Nuzzo and Ben English.  Respectively, they beat the male and female marathon and male Pikermi records. That's quite a showing for one race! Just utterly smashed the marathon record, running a 2:34:28 and taking the previous record of 2:45 and burying it.  This will be one of the hardest marathon course records to beat, given the course and the often humid weather.  Way to go, Justin!


* Every year we have had someone accomplishing an amazing feat. This year Shannon Hays, who is attempting to be the youngest female ever to run a marathon in every state under 4 hours, ran a 3:50 and knocked state 27 off her list. She mentioned that this was probably her first negative split of a marathon ever which she was able to achieve by respecting the "gushers" (mentioned below) and going way slower than she usually does in the first half of the race. She should finish her quest by the end of 2012. Awesome stuff, Shannon! (Check out her blog HERE)

*While the Drake Well Marathon is essentially four years old, only three of the years have been run on the quickly becoming quite infamous Double Gusher course.  In keeping with the oil history theme I heard one runner call the two separate three hundred foot hills "gushers" and I think that might just stick. Only three runners that I know of have done all of the new DWMs:

Rick made this marathon his 255th lifetime marathon.  That is not a typo. To have rick back every year is an honor.  Doug has posted times of 3:04, 3:00 and 3:02.  If you take a look at this course and its elevation profile you will be quite impressed by those times.  Stephen, after running 3:45 and 3:54 in the previous two years, crushed out a 3:06 at Drake Well this year.  Talk about improvement!

* Three high school classmates of mine, Julie Angione, CJ Kirvan and Jason Roberts all ran Pikermi personal bests with CJ knocking some 15 minutes off his time from 2009. In fact, I am pretty sure I am the only one who did not cut down his PR at the race!  Seeing friends who were so active in high school staying active 17 years later is so refreshing.  So many people let the years put on the pounds but here is one of the most athletic classes in my high schools history continuing to make sure exercise is a part of their lives.

The race saw a few monkeywrenches thrown into the works when massive downpours started during the race and wet the bodies of many. Fortunately, spirits were still quite high and dry.  A few athletes made a wrong turn in a place no one had ever made a wrong turn previously and I immediately felt awful.  Having done the exact same thing last week in the Mountain Tropic 70.3 Tri, I know how easy it can be to either simply miss a properly marked course or misread something.  I had the displeasure of actually seeing two of the marathoners take the wrong turn in font of me while I was actually running the Pikermi and I had to track them down and send them the right way.

In fact, as soon as I crossed my finishline I continued to run off the track and out of the field to make sure they got back to where they needed to be.  Obviously both were disappointed with the snafu but were quite gracious after the race.

The volunteers for this race continue to get better and better and one of the nicest surprises of the entire race was how sparkingly cold the drinks were.  One runner told me that they grabbed a cup and it was so nice they actually backtracked ten feet and grabbed another!  My own mother, in spite of breaking four bones in her foot and being in a wheelchair, manned her own aid station at mile 8 with tons of treats and goodies.  Unfortunately, the downpour started right when most of the runners were getting to her and few stopped for the popsicles, cookies, chips and beef jerky as they were heading for cover.

But the rain did relent and even if it had not, the wonderful 7 mile out and back section of the bicycle trail provided the perfect cover for runners.  Virtually every foot of this bike trail is covered in thick, green forest which keep even the most torrential of downpours off of the runners.  I did find it funny when one person told me they chose this as their first marathon ever but did not like out and back sections.  "You saw the map, right?" I thought.

The biggest change came from renamed the half to the Pikermi as numbers of registrants soured.  The race nearly doubled its participants and will force us as race directors to evaluate what we need to do to handle all runners adequately.  While we had portapotties at the start and again at mile 10, I know some were wishing we had them along the beautiful bicycle trail.  I know a permitting issue with the state park we run through may make that difficult but we are going to see what we can do.Without a doubt, the desire is to get more runners to the race so we can showcase what a great town Titusville is, but we do not not wish to do so if we sacrifice the quality of the race.

As I was wearing my medal, bib number and Beef It's What For Dinner shirt, I did not necessarily look like a race official to many.  This allowed me to mingle around the race participants and here their positive (many) and negative (few) comments about the race.  When you work so hard creating something you always hope that every single person loves it.  Of course there is always work to be done and no race goes smoothly but this year was far and away the best race we have ever had. There were so many fantastic individual stories from this race as 31 different states, three countries and the Netherlands Antilles were all represented.  For a town not all that easy to get to in a race in only its third year we were so pleased to welcome this diverse of a group to our race and town. with such positive feedback, there is even talk we may need to cap the race registrants next year as we will be simply bursting at the seams with runners. 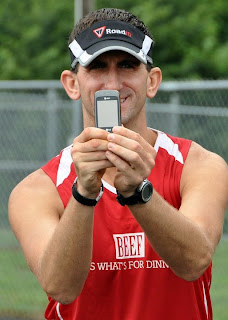 I am sure the race can hold far more than we think, just like I kept the original Drake Well Marathon to 25 participants because I did not think any more than that could adequately fit on my track for 105.5 loops.  After the race I saw it could have easily handled three times that number. but taking baby steps and moving forward each year in a positive step is what we at the Drake well Marathon and Pikermi are all about.  I have zero doubt even better leaps forward will be made in each successive year as this race grows and grows.

We'd also like to thank the Boston Marathon for having its registration open just three short weeks after our race making us one of the last chance to qualify for the new Boston standards! That can't hurt attendance at all.  Hope to see all of you in 2012!

Glad to hear that the weather was good (despite the rain, but that never deters us real runners) and that all went off without any major hitches. I hope to be back for the Pikermi next year (dependent on college plans, of course). See you soon.

I too am on my way to accomplishing a goal and finishing the Drake Well Pikermi (3rd overall female) was part of that goal: to run a half marathon in every state, DC and all 7 continents! The Drake Well Marathon and Half Marathon will definitely grow as word of how very well-organized the races are and how beautiful the course is as it winds through Oil Creek State Park. You are welcome to read my recap at http://halfcrazedrunner.blogspot.com/

Just wanted to say thank you for cheering me on as you passed me (only because I got the early start!) in the Mesa Falls marathon yesterday. I was the pregnant mom of 8 slugging it through her first marathon (and loving it!). I just ordered your book on Amazon and look forward to reading it.