Lifetime Splash and Dash 2 of 6 Recap

2019 has been a tad of an anomaly for me. I am running my workouts the best I have in nearly a decade. However, this would only be my third race of the year.  The last race I did, a half-marathon, I had hoped would show me if I was going to race well or just have good workouts. Unfortunately, I dealt with a respiratory problem which left me just as unsure about my progress after the race as before.

The last aquathlon I did, five weeks ago, went spectacular for me. The only thing which hadn't gone my way was breaking the 25:00 mark. With the weather being much warmer on this day, I didn't expect that to happen. One good thing for me is unlike that race, where I hadn't swum in six months, I did have one swim event and three workouts under my belt. That is not even REMOTELY enough to make big leaps but it was at least something.

The day of the race there had been a rain storm in the mid-morning which somehow had cleared the humidity out of the area. I am sure there is an explanation for that but didn't make sense to me. Regardless, since I wasn't expecting to have a great race, and I am experimenting with all sorts of different workout regimens, I went for a small four-mile jog around lunch before this 6:30 p.m. race. 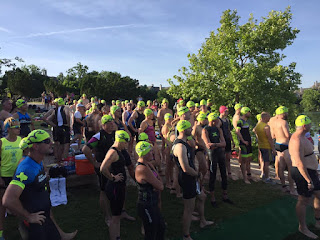 Arriving at the quarry, I hoped the water was still cool given all the rain Austin has received as of late. Someone told me it wasn't but as I slipped into the water, it was far cooler than I expected. This gave me some hope.

I picked my usual spot along the further buoy and when the gun started, I was a little perturbed that someone came from my right, on the other side of where they were supposed to be.  Soon, I had no choice but to let them get in front of me and then slide to the right again. Open water swims can be a tad annoying and I am glad that I am a strong swimmer who doesn't have any water anxieties.

I soon found that I was right in the slipstream of another swimmer. I couldn't pass him, but he wasn't going any faster than me. As I hardly felt spry enough to make a move on the swim, and was worried what the heat would do to me on the run, I just used his bubbles to guide me along. Without needing to sight while swimming as I could use him to keep me in a straight line, I had a rather enjoyable little dog paddle. As usual, a few swimmers blasted out like sharks, a few were behind them and then there was me. No one really around me on either side and no one nipping at my heels. Overall it felt good but until I got out of the water there was no way of really telling.

My first lap was just trying to get rid of a small side stitch as I tracked down a youngster (160 years old) in front of me. I knew I was faster than him on the run as I had beaten him handily last month.  This time, however, he held me off a tad longer than I expected and I wondered if he was rounding into shape. His swim was faster so who was to say his run might not be.

I passed him a little after the first lap but didn't hit my watch lap to see what I had just split. Rather than fumble with it and risk tripping, I knew I could just see what I had left on the next lap and do the math. As I have said before, this run course is not easy. The footing is dirty and rocks and roots, and it twists and turns with branches hanging down from trees. I was thankful for those trees today as they blocked the sun on the front half of the loop. But on the cruel climb on the back half, the sun was fully bearing down.

I could see another runner in front of me as we approached the end of the second loop and if I wasn't mistaken, he was the fella who had finished just a few seconds in front of me last month.  I hadn't known he was on my loop and while I might not have been able to catch him last month, I'd like to think I could have dug deep to do so if I was aware he was also finishing.  This time I wanted to make sure that didn't happen. It took me a bit longer than I wanted to catch him but I passed him on the same downhill portion I had passed the teen on the previous lap. 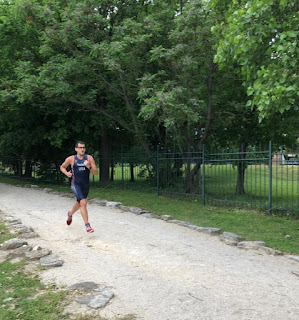 The stitch in my side was not relenting but I felt I was going to break 25 minutes and if so, it could hurt for another few minutes. I hit the last straightaway and saw I had 30 seconds to break that barrier. I gave it all I had and set my third consecutive (going back to last fall) PR and eked out a 24:58 which was good enough for 7th place overall. I lost overall Masters to a newly minted 40-year old who hadn't raced a single one of these last year. He used to beat me by two minutes. This time it was just 30 seconds.

What made me very happy was that my run appeared to be three consecutive 4:20 loops. I have no doubt in my mind I can get those down to 4:10, maybe even 4:05 each. If I actually get my butt in the pool and work on my swim, it is entire possible I can take another minute off this PR. That still won't put me close to winning this thing as the overall leaders would still be two minutes faster than me (most of that coming on the swim) but it sure does make me feel good that somehow, at less than two weeks away from being 43 years old, I still seem to have some surprises left.

The weather in Austin isn't going to do me any favors in the upcoming months but I have already shown that even in far less than ideal conditions, I am still improving. Here's to that upward climb!