Be a Better Traveler

When 2011 comes to a close, I will have flown over 100,000 miles, all entirely in the United States (meaning no long flights to overseas lands which would pad my mileage stats.) As such, it is quite easy to say I have spent a great deal of time in airports, airplanes and the whole shebang. Throw in the fact that, by nature, I am an observer of human behavior and often make note of how humans behave in large groups and I feel I am quite suited to embark on this missive of how you can avoid being an excruciatingly horrible traveler.

For the most part, this entire article could contain three words: “Use Common Courtesy”. However, there is an adjective in there which is about as misplaced as it possibly could be. So rare is courtesy in large groups of people that the short and simple directive above would be completely useless by itself as, for the most part, it would be ignored.  No, further we must delve and with all do succinctness must that plunge be in order to avoid hitting the rocky cliffs of rudeness. (I like this overwrought description.  Deal with it). Do not fret, however, if you find you are guilty of any of the following, as chances are we all have done one if not all of them. Just realize that the time is not too late to not do it again. Without further ado, onward we go.

1.    Don’t stand on the escalator/moving sidewalk.

Or if you must, move to the right taking your bag with you. There are still plenty of people in this world who do not see the escalator as a free amusement park ride provided by the airlines.  It is understandable that you may be weary, heavily-laden with luggage, or possibly frail. Obviously I am not so callous as to suggest the less than spry need to hustle up the moving steps. But,without a doubt, realize others may be in a hurry and you are squarely in the way.

I understand that you want to get your bag and go home. We all do. But when you straddle the metal bag giver, you make it infinitely more difficult for everyone else to see their luggage.  Even worse, when and if they do, they not only have to go through you to grab it, they then have to go through you again to swing it onto the floor. If everyone simply stood three feet back, when the luggage popped out magically of the gaping maw of the carousel, you could step forward, grab it, swing it onto the floor and retreat to whence you came without a care in the world. When that siren blares and the red light starts flashing, the stampede of people ambling forward pavlovingly until their toes touch the metal circle always reminds me how much more like sheep we are then we realize.

Chances are very high this is not your first flight since 9/11 or when some jackwagon tried to sneak bomb materials onto a plane in his underwear. Therefore, you know that you must have to take off your shoes, have your boarding pass and ID ready, remove your belt and a plethora of other things before you can go through security.  Granted, as Benjamin Franklin stated “Those who would give up Essential Liberty to purchase a little Temporary Safety, deserve neither Liberty nor Safety” studies have shown how very little these security measures could stop additional terrorist threats and how all of us passengers being forced to comply with them have only made air travel horrible in many ways. That said, they are the rules and you know them. So in order to keep lines from snarling through the airport, do your part to have yourself ready to get through these safety measures.

Americans by culture have a much greater area around them that they wish to keep free of other persons. Unfortunately, given physics (and the ever larger normal American) planes do not allow for lots of extemporaneous space. Therefore use your head.  Do not bring tuna fish onto the plane to eat. Try to take a shower. Wear socks to cover your feet. And for the love of sweet merciful Mary, if you are even thinking of using chewing tobacco (I promise you I had a seatmate who did) utilize a different means of transportation. Odors and the like are magnified by the close proximity of others and then multiplied by a factor of ten by the fact that there is no way to escape by simply walking away. 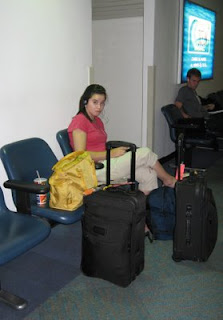 I absolutely guarantee you, with a 1000% money-back guarantee that any human being walking through the airport is more tired or weary than your satchel. So move it the hell out of one of the few precious seats where people can sit! Put it at your feet, on your lap or somewhere else. If there are plenty of seats available it is fine to put your bags next to you in a seat but as soon as you see that things are filling up around you, be aware that you look like a self-involved jerk when you do not move your bag so someone else can sit down.

Listen, after two straight days of standing all day long at an expo signing books and talking with runners, followed by running a marathon, triathlon or what have you, I know all about wanting to be comfortable on a plane ride home. And since there is no dress code that keeps people off the plane when they dress inappropriately, this rule, like many of the above, is one which cannot be enforced.  But if you are over the age of 5, wearing pajamas and slippies onto the plane should be beneath you. You are in public, not your living room.

7.    Treat the airline employees with respect.

Chances are a bazillion to one that the reason your plane is delayed has anything to do with the people you are talking to presently. Yes, you are frustrated and they are who you wish to take it out on, but remember that they are also the ones who hold the keys to getting you on that next flight. I honestly have no idea why someone would want to work in these customer service areas of the airline industry as no one is ever really happy when they talk to them. But I am glad they are there. They also have feelings and have been inconvenienced by travel too and therefore can relate. Try your best to put on a happy face and they may be able to do a little something extra for you.

8.    This goes double for the flight attendants.

They have to serve hundreds of people in a tight space. Why they are not tipped but we tip waiters is beyond me. Say please and thank you. Do not be too demanding. Listen to the announcements. (Yes, we know how important it is that YOU do that last work email because the world will collapse without it getting through, but when they say to power down your devices, power down your freaking devices!) 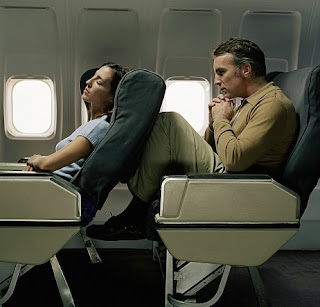 Without a doubt you paid for your seat and have the right to use it in any way possible.  But if you must recline it, for that extra three inches of comfort, try to be slow about doing so. Chances are high the person behind you has a computer out or is doing something else that will be equally hindered when you put the seat back. So if you do so in a guillotine-esque way you are just going to make them hate you. Likewise, if you are using the tray, remember that it is connected to the back of the seat in front of you and vibrations travel very far. In addition, realize that each seat is not your personal crutch to either lift yourself out of the seating position or lean on because you are standing in the aisle.

Whether it is to get on the plane (seriously, board when your zone is called and until then get out of the way so others can) or get off the plane, “lines” are things humans have supposedly understood the concept of their entire lives. When the plane lands, feel free to jump up if you want to stand around until you are actually allowed to get off of it, but stand where you are. The people in front of you have every right to get off the plane before you do, unless they have made it clear they are in no hurry to do so. If you have a tight connection, that is a different matter but probably one the flight attendants have made everyone aware of.

It really all comes down to common sense and common decency, again two misplaced adjectives. Note I am not even addressing the obvious things like the crying baby (which for the most part there is little which can be done) but I will say slightly older and unruly children should indeed be disciplined. I cannot even imagine acting up around my parents the was some children do in airports.  My ass would have hurt for a week. But I digress.

Until they invent teleportation (sweet scooter I would be the guinea pig for the testing of that any day) airline travel is the way we must go to travel long distances in short periods of time. It is far from perfect but can be made so much more enjoyable if you just think of every other passenger as your Grandma.  If you wouldn’t be an asshat to your Grandma, don’t be one to the stranger in 23D.

I still, however, stand by one of my most viewed posts ever – Eff You, Jet Blue.
Posted by Dane at 10:58 AM

As a frequent flier and the spouse of an airline employee, I agree with every one of your points ... some more than others. But all are valid ... moving walkways should be included with the escalators. Moving walkways are a great way to get around the airports but only if nonmoving/slowmoving people are on the right side. Thanks for allowing me to vent also. Love your posts!!