If you haven't heard, Jordan Hasay attempted to run the IAAF "A" World Championship qualifying standard in the 10,000 meters. She was looking to run under 31 minutes, 45 seconds. This attempt was slightly unique as it will not be run during a normal meet conditions but rather one which is more or less constructed solely for her to try to do so. (Read more here.) 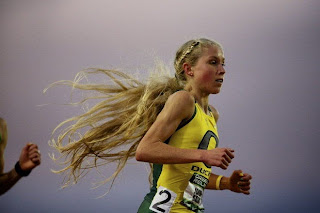 Some people thought this was unfair. Hasay had male pacers, no real competition  (if any at all) and the meet was designed with her training specifically in mind. Personally, I see not a single thing wrong with this.

First of all let's discuss pacers. I am not even going to begin to argue that having pacers is not helpful.  I have paced many people to a Boston Qualifying time in my day and if it was not beneficial to have someone do all the hard work for you (both by breaking the wind and exerting the effort to stay on pace) then I would have never wasted my time doing it. However, there are very few races where someone, somehow, isn't setting the pace.  It might not necessarily be the exact pace you want, but a pace is being set.  You can either run that pace, faster than that pace or slower than that pace.

Some are bothered by the fact that the pacers are male. Well, I am guessing, if Hasay or her coach Alberto Salazar, felt that females could actually hit the necessary time to do so, they would employ them.  But, newsflash, men are faster runners. The ability to find more men with the talent to hit a sub 32:00 10,000 meters means that men are going to be used in such a situation.

Second, some have questioned the fairness of it all. Although, like with many arguments, getting someone to explain what they mean when they throw out a blanket term like "unfair" is hard to do, I think the gist is that most runners would not be able to get a meet thrown together solely for them to try and get a certain time. Well, as I can so eloquently put it - duh. Most people are not trying to get a World Championship Time. Is it really surprising that those with the means, talent and money are able to find opportunities to do things that normal people would not normally be able to do?

As far as I know (and I couldn't find anything saying otherwise - admittingly I did not look super hard because, well, no one pays me to write this blog so do you own damn research) if there were other women looking to run this same time and were in the Nike Project (which Hasay and her coach are part of) chances are more than likely they could join in. There is no reason why not. It is not a competition that Hasay is trying to win. She is not attempting to say she won the most marathons ever or anything of that nature. She is trying to say she hit a specific time.

Which boils it all down to everything in running: the clock.  As I said in my book 138,336 Feet to Pure Bliss, running is one of those rare sports where the time does not tick down. It ticks up. Hasay is hoping to run 10,000 meters before the time ticks too high. Whether she gets beat by male pacers or female competitors means absolutely nothing. She wants a time. 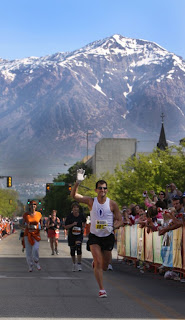 I have run 145 marathons. In my fastest marathon ever so far I finished 9th place overall. Do you think I cared one bit about my place? No, I wanted to run into the 2:4Xs so bad that they only thing that mattered was that clock. In fact, with 3 miles to go, fearing a cramp or a anything else that could derail that attempt (I had run three separate 2:51s prior) I eschewed running even faster and cruised in, losing over 90 seconds in the final 5k.  I had a buffer and the only thing that mattered was the specific time.

If I had not gotten that time, could I have had someone put together a marathon that fit my needs, with pacers on hand to help me get the time I wanted? Actually, yeah, probably. Or at least a very close approximation.  There are over 500 marathons in North America alone this year. I could easily find one that fits all my necessary criteria. Which is the final issue about the event tonight.  Finding a 10,000 meter race on the track is not nearly as easy as people think.

Having said all of that, Jordan ended up "only" running  a time that got her the "B" standard (missing by 1.5 seconds.)  But in all of this debate, the one thing to remember is that other runners are not the enemy.