Having a partnership with a shoe company has many perks.  One of them is getting advance "copies" of shoes to go on test runs. This can be bad, as I learned previously with another shoe company, as you basically become a guinea pig for prototypes. However, with Karhu, who has been in the shoe business for decades, I love being able to pull out a pair of shoes few have worn and go see what they can do with no worries. That said, as with everything I try, talk about or review, you know it doesn't matter if the product was given to me for free, you will still get my honest opinion. Which is why you will probably be happy to hear that I think the Fluid3 Fulcrum is pretty fantastic.


(And if you stick around to the end of this review, I have a 15% off code for you to use! Exciting!)


I recently read a review of the Karhu Flow 3 Trainer that was quite thorough. I love the Trainer and have worn them in most of my recent races. I just hadn't written a review like about them yet, and after reading his, I don't have to do so - it nails all the things I feel.  But above and beyond talking about the shoe, the reviewer mentioned things that, for the most part, I don't care about. More accurately, they are things I do not think about at first but when pointed out, I think "Yeah, that is pretty cool." Things like the packaging and the slogans and the history of the company which come in pamphlets in the box. Well, since I read that review I started to start noticing those things. 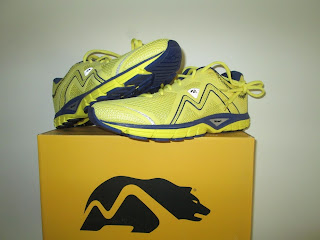 So fresh out of the box, the new Karhu Fluid3 is just snazzy.  Gone are the days when just adding a bright color will make a shoe stand out. As such, somehow, even though the color is a bit eye-popping, it is not  too much of the "Hey, look at my new shoes!"

Sliding them on, they just felt nice.  Then again, new shoes always feel like Christmas. However, wit hthe Fluid3, there was something about the way the tongue of the shoe was structured that it just felt nice and snug. I coudn't notice anything off the top from its appearance that would clue me into to the fit.  I just knew I couldn't wait to give them a test run (or five.)

My intention before writing this review was to try them on some different terrain and over numerous distances and speeds. As such, I did a double digit mile run with them on all pavement, another double digit mile run on a mixture of pavement, soft trail and grass, a track workout and finally a nice 6 mile tempo run.  I figured that was more than enough variance to form an opinion.

I noticed right away that the shoes felt just a touch heavier than the Flow3 I had been running in.  Turns out, the Flow3 is 8.6 ounces (for a size 10.5) and the Fluid3 is 8.9 ounces (for a size 11).  A whopping .3 ounces and my feet could tell the difference. Also, as there were limited models I actually wore a size 11 for the Fluid3 and didn't notice any difference. I might actually have sized up a little bit after 145 marathons.  My uterus didn't fall out but I lengthened my feet. Go figure.

The Fluid3 performed admirably on all fronts. While not sold as a trail shoe and the trails I were running on were extremely light on the "trail" side of things, I didn't notice any marked difference in my performance. Same to say with the track workout.  Normally, I would go with a lighter show like the Karhu Flow Light which Runner's World just reviewed in its latest issue. Nevertheless, they were just as quick to respond to the rubberized track in a set of 400s as they were on all the other runs.  In fact, the first run I did in them was after I finished my Spudman triathlon, drove 8 hours home and ran the next morning.  The shoes felt so nautral and right that I kept forgetting that I was supposed to be paying attention to them in order to review them. 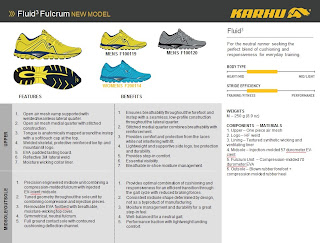 Honestly, if "never once thought about my feet" is the worst thing that gets said about a pair of shoes, then you have got yourself a winner. And that would be about the worst I could say about these shoes. They hugged my foot, yet gave it ample room.  The upper felt light and airy and when you sweat like I do, you want as much coolant as possible.  The fulcrum that Karhu has made famous has been toned down from previous models but still gives you as a runner the being-propelled feeling. I remember reading "I simply can't run slow in Karhus" and I would have to agree.

The Fluid3 are not necessarily for those who need stability as they are fitted more for neutral runners but I wouldn't be surprised if those who over-pronate a touch wouldn't find them to give them the support they need. Lots of negative in that sentence so let me clarify: these might just be for all kinds of runners. (For much more about the tech specs for the Fluid3 make sure to either click on the picture above or scoot on over to Karhu's website and read more.)

All told, it is a really solid shoe. I have already put close to 100 miles on it and plan on getting many more out of it by the time I am done.

In addition, as promised, if you use the code "SEEDANERUN" on Karhu's website, Karhu will automatically knock off 15% whopping percent from your purchase. You can also use that code at Karhu's parent site, Craft, which makes awesome running apparel as well.

This is the review that just keeps on giving! Thank me later when you are crushing new PRs in your Fluid3.
Posted by Dane at 11:35 AM

Dane--nice review and even nicer shoes. I am thinking of getting a pair based on your affiliation with the company and this review. Thanks!