Too Young to Run? 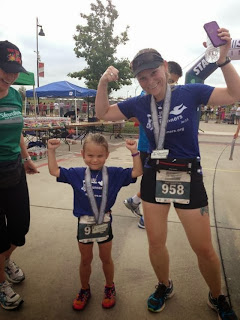 A few weekends ago I was in Boise for the City of Trees Half Marathon.  There, a local girl, Emma Strommen was about to take on one of her numerous half-marathon finishes. She ended up running a 2:17 at the tender age of seven.  Then about a week or so ago a 6 year old ran a half marathon in slightly over 3 hours (2:47 for those scoring at home, or even if you are alone.)  Then this past weekend at the Javelina Jundred in Arizona, not only did Colby Wentlandt, age 12 run his THIRD 100 mile race, (finishing juuuuust under the wire in 29:49) but a young girl named Teegan Redden finished the 100k.  Teegan is 8.

As with every time a young person does something of tremendous difficulty, the two sides come out with ideas of how young is too young to push their limits. My definitive, all-encompassing answer to this which will settle all bets is:

That is not a cop out.  It really and truly depends on too many factors to adequately address the over-arching question without hedging the answer so much that one needn't bother opening their mouth. I mean, is it that much worse to have kids running long distances at age 10 or have them playing in sports that force them to be on constant travel teams when they are the same age.  How about gymnastics? A sport so tough on the female body that it suppresses them actually going through puberty because of restrictions on diet, weight etc.  That's better? But every Olympics, for a solid week, we are subjected to yet another assortment of high flying pixies who are only hoping they don't slip and fall at the wrong time and become a meme.  Right, McKayla? 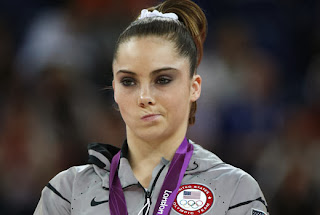 What I found most telling about this last instance was hearing the usual boo birds coming out of the woodwork who were, once again, far removed from the actual incident. (In a seemingly unrelated but hang-with-me-a-second note, if you are a football fan, you saw how last weekend Dez Bryant of the Cowboys was given all sorts of hell for a seeming tirade in front of his QB, Tony Romo.  Well, film just released show that not only was Bryant not being a prima donna, he was actually all kinds of excited and positive. Yet, people no where near the situation had no problem voicing their opinions.  See how I brought that back around?  Thanks for sticking with me.) However, I was there and with ample time on my hands, I decided to watch and observe.

As there are differing opinions on whether this kind of running is good for the physical health of a young developing child,  I decided to focus on the other parts I could observe. I was most curious if these runners looked like they wanted to be out there doing this.  In other words, were they being pushed to do this by parents who were living their dreams through their children (and oft-heard lament.) Obviously they were going to be receiving all kinds of accolades and positive reinforcement from the impressed runners there so seeing if they were just happy when they passed through the masses would not be enough.

As luck would have it, I was positioned in a place, writing on my laptop, that allowed me to be in direct view of both Teegan and Colby when they came in from their respective loops. After the cheers from the crowd, both were quickly out of view and being tended to by their crew or loved ones. They seemed content, relaxed and happy. There were zero signs of lack of desire, no external pressing from their families to push forward and just a general, underlying ease about them both.

Obviously this is hardly a double blind study by a certified social psychologist but I have a pretty firm grasp on human behavior. These kids were absolutely stoked to be out here doing this. They were being taken care of well, they were enjoying pushing their limits and they had obviously done the training necessary to complete these tasks. If they are doing harm to their bodies, it truly hasn't shown. It can't possibly be any more harmful than being fat and lazy. I heard one person say that allowing them to run was "woefully irresponsible, bordering on child abuse." Ironically, the person saying this is, let's say, overweight. I wonder if being overweight is more or less woefully irresponsible than allowing children to push their boundaries.

I posted something the other day on Facebook about how the vast majority of people have no problem being vehemently in favor for or against something of which they have little to no understanding of.  This confuses me to no end. This instance of young children running is a perfect example. I do not have the answer as to what is too young. I also know enough not to impose my wants/desires on others, especially when I am no where near involved enough with each circumstance to know the specifics.

Remember, there was a time not too long ago when women were considered too frail by many to be able to run longer than 800 meters around the track. Women didn't run a marathon in the Olympics until 1984. NINETEEN FRICKING EIGHTY-FOUR. Citing one study over another saying this may damage developing bodies is hogwash. There are plenty of studies that say I should have no knees after doing 52 Marathons in 52 weekends (or 202 miles straight. Or 350 miles in one week.) Look at the picture above. These kids were happy. These kids are healthy. These kids are hopefully the fit ones who will be taking care of our old butts in the future.

So, when is it too young to run? I will tell you. In the womb.

There you just have to swim.
Posted by Dane at 7:11 PM

I know Teegan's mom & dad. They have a special child for sure. You can't make a child run like that--for those kids running has been a lifestyle that they also adopted. It's pretty amazing, but not necessarily bad.

So I see what you did there. You made sense. :)

My son ran his first 5k in Aug 2012 at 8 years old. He's now 9 and has done 9 - 5ks, 1 - 4mile and 1 - 10k. He loves it and his improvement has been jaw dropping. We routinely do training runs together of 3-6 miles, at a 7:30 pace. He's healthy, strong and happy.
I get different reactions from people. Other runners we pass on the road smile and cheer him on big time. They know all the benefits of running. I've also gotten criticizing comments and dirty looks. I suppose they think I'm some sports-freak dad that has unrealistic expectations for my son. Nothing could be further from the truth. I'd let him quit running tomorrow if he wanted to. I'm not saying I wouldn't try to talk him out of it, but I've NEVER forced him to go on a run.
I did plenty of research on the subject of children's running to make sure I wasn't doing anything to hurt my little guy. All the experts, coaches and doctors, say go for it. I also talked to his pediatrician and the only word of caution he had is making sure my son tells me when he is hurting.
If you are thinking of getting your children into running, go for it!