What the Beef Industry Needs

I was recently reading a Runner's World​ article about a guy who ran around the world in a world record time. I didn't get far enough into the article to see how that world record was determined and how exactly he connected all the continents. Or how, considering it looked like he flew to multiple places, what makes it "running" around the world. I know most "world records" have stipulations as to what constitutes a record exactly. How those are laid out always intrigues me, given how arbitrary they can seem. So, what stopped me from reading further, since the logistics of this sort of feat are what are always intriguing to me? Well, one of his journal entries said:

"I am struggling to find much to eat during the day other than burgers. I may be the first person ever to run 50+ KMs per day for months and put on weight."

I am sure some of you might not see the problem with this statement. It's funny. It pokes fun at food. It shows how even running over 30 miles a day can't combat the fatty nature of burgers. But THAT is the problem. The idea that eating beef is inherently bad for you even when you run more in a day than most people run in a week. If this was a one and done comment, it would be easy to ignore.  However, in this very same issue of Runner's World, there are two very similar entries confusing the issue of beef and calories.

First is an article about Traci Falbo, who recently ran over 242 miles around a track in Alaska.  It talks about her weight loss from a peak of 213 lbs to her svelte 133 pounds now.  The article mentions how her lunch used to consist of a quarter-pounder burger, with cheese, fries and a large coke.  "I didn't realize how many calories that was," She says. Then Runner's World adds "It's 1,290!"

The second showing of this misconception is literally four pages later during an interview with elite middle distance runner, Duane Solomon. Under the heading "Splurging" he says: "I get a burger and a shake." 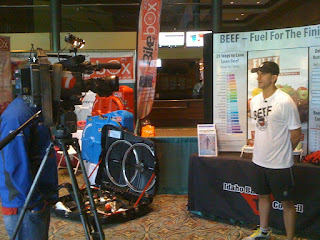 Now before you think I am picking nits, let me give you some quick background. I have been working for over a half a decade to try and combat the misconception about the healthful qualities of beef. These types of comments are so prevalent it is amazing. The idea that eating beef is unheathful or bad for you is so ingrained in our culture it is almost hard to argue. But I guarantee you beef is rarely the problem when it comes to ingesting too many calories. Without a doubt, it is the bread. Or the sauce. Or any of the other things added onto the beef that pack on empty calories. (Just as an FYI, three ounces of lean beef, the size of a deck of cards, contains only 150 calories.  No, seriously. ONE-HUNDRED FIFTY. That means of the calories Traci Falbo had above, 179 of the 1290 came from the meat. That's 13% of the calories.)

This attitude toward beef is not just held by those who have contempt for the product. In fact, this all reminds me of a few years ago when I was running the Akron Marathon​. A guy came up to me at the Ohio Beef Council​ booth where I was signing books. I asked if he liked beef as he took one of the beef jerky samples I had.  He patted his rather rotund stomach (on a relatively fit body otherwise) and said with a smile: "What does it look like?" 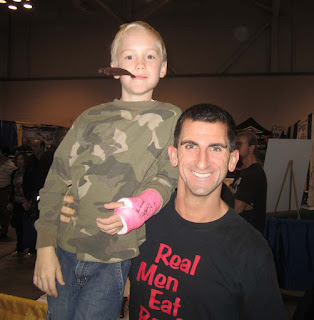 I am pretty sure that Ohio Beef Council people had a bit of a heart attack when I said this but it was what I thought. The guy laughed and said I was right. He knew the burgers weren't making him fat. It was his other poor choices. Not just lack of exercise but adding unhealthful things to a healthful food. Yet here was someone who was a fan of beef still convinced beef was his problem. This needs to be addressed.

The beef industry is comprised of wonderful people doing wonderful things. But the message of beef being healthful is not getting out there the way it needs to be done. Preaching to the choir at food festivals in rural areas is a waste of money. Farmers and ranchers know beef is good for them. Unfortunately, years of almost needing to tiptoe around extremely vocal vegans and vegetarians has made the beef industry gun-shy. I say vocal because according to a Harris Interactive study commissioned by the Vegetarian Resource Group, only FIVE percent of the U.S. is vegetarian and about half of these vegetarians are vegan.  That is a noisy damn group of people.


When I was asked to be the first national “spokesrunner” for Team BEEF USA, I knew I would ruffle some feathers. I am not know to be exceptionally quiet nor do I back down from challenges, especially when those confronting me are flat-out wrong.  Now, let it be know, being a "spokesrunner" carries no perks. I don't get Omaha steaks delivered to my door. In fact, if anything, I am often the target of misdirected stupidity, misinformation, and hatred from many for my stances. That's fine. I have thick skin. But changes need to be made.

For the longest time, those attacking beef did so on two grounds:
1. it was unhealthy and not good for athletes or anyone.
2. it was ethically or morally wrong to eat animals.

At expo after expo, working with state beef councils across the nation I was told how nice it was to have me in the booth. While I am sure it was for my sparkling personality, what it probably was about was how those wishing to vilify the beef industry couldn't use the unhealthy leg of their argument. Obviously, eating beef wasn't harming my athletic performance at all. I was told it was refreshing to not have to deal with those who said eating beef was bad for you. Now, they only had to deal with the supposed moral implications of eating an animal. Interestingly enough, recent studies seem to indicate that plants feel pain, too. So if "killing" something to eat it is your main issue, well, to quote Jack Bristow from Alias, "You're gonna have a hard time." 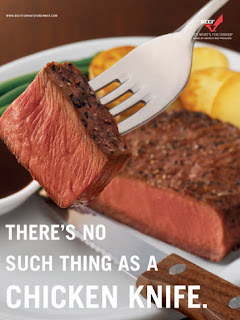 The Beef Industry needs to no longer be as passive and as acquiescent as it has been in the recent past. Great bumper stickers like "The West Wasn't Won on Salad" shouldn't be kitschy or used only subversively. I know this is hard for many farmers and ranchers who are, by nature, hard-working people who mostly keep to themselves. If someone wishes to be loud and vociferous about what they are raising, then so be it. But unfortunately, the squeaky wheel is getting the grease. Like those who deny climate change or say vaccines cause autism (or put the word "babe" in their name - Eff off, Vani Hari, you ridiculous, idiotic hack) the drum-banging noisy ones are getting the attention.

My feeling is not that the industry needs to sway from its roots and go on a scorched-earth policy of campaigning. But it needs to hit people where it hurts: in the truth crotch (patent pending.)  Misinformation and misleading ideas are easy to spread and hard to kill. But if persistent, one can do so. I have been doing just that for years. What I found, to my delight, was the number of athletes who were well aware of how good beef was for them. But they were the quiet ones. They let those who wished to put down their food choices go right ahead and be loudmouths. Rather than bother themselves with the naysayers, they just ate the beef and excelled in health. 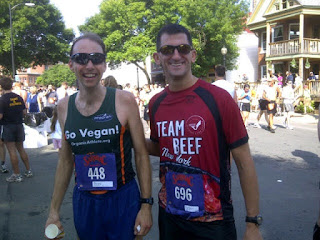 Of course you can survive without beef. There are also high-profile athletes in the running world who swear by a vegetarian diet. Good for them. It truly matters what works for each of us with regards to how we function best. However, vilifying a form of food which is good for you, inexpensive, and tastes mighty fine is something which we who love beef should no longer stand.

I've been doing all I can to get the message out.  Please join me.