It has been 61 years since someone first went under four minutes in the mile. I hesitate to link to who that is because if you are reading my website you should know. But I will because I guess we all don’t know something until the moment we do, right? Regardless, the fascination with those who have run under four minutes to cover 1609 meters hasn’t really ended. It may have died down a little bit but it is not over.

I have said many times I feel the best thing about running may be the worst thing. Because running is so participatory it does not necessarily lend itself to be a spectator-friendly sport. All those who are most interested in running are out there doing it, not necessarily watching it. That is a shame. 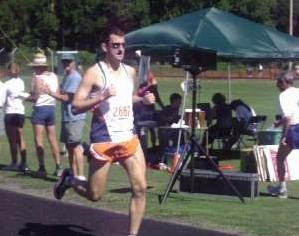 When it comes to running a sub-4 mile, I have no chance. I did not get the genes. I have, however, run a handful of sub-5 miles but they come with a caveat. One was in high school and while my coach an I know I ran it, we can’t find the actual newspaper clipping with the time. I then ran a 5:00 flat which naturally we can find because there is nothing so excruciatingly as just NOT breaking a huge barrier. I have run two sub-5 miles as an adult but they were on downhill courses. (I will add that while they were downhill, they did include three 180 degree turns, one 90 degree turn and two street crossings which were not closed. But the downhill helped.) I have run a 5:03 mile on a ridiculously hot freshly paved street in Harrisburg, PA just an hour after finishing work for the day at a law firm. So you can see I have come close to sub-5 as an adult.  In fact,  I know I have another sub-5 in me. Hopefully this fall at the Milwaukee Running Festival I will get that goal. If not, I will wait another 9 months and try to do it as a master’s runner. (It will be more impressive when I am an old guy.) But I say all of this to point out that I am merely trying to break five minutes. Not four.

Never will I not be impressed by someone running under four minutes for the mile.  In running long-distance events like the marathon you can fool yourself into thinking you weren’t all that far behind the winner. But if they beat you by 26 minutes, well, they were going a full minute per mile faster than you.  You still can delude yourself with your own greatness. But not in the mile.

This Saturday there was an event put on by FloTrack called the Thorwdown in Duniway Park in Portland. Even though Nike is getting a lot of crap because fan fave Nick Symmonds is (rightfully, I add) fighting USATF’s seemingly unclear contract that athletes must sign in order to be on the national team in Beijing coming up, they have done some remarkable things for the sport. The track in Portland is made up partially of some 20,000 pairs of donated shoes from Nike. That’s pretty cool. So when I saw Galen Rupp and some other highly-talented people would be making the trip to race here, I knew I wanted to watch. 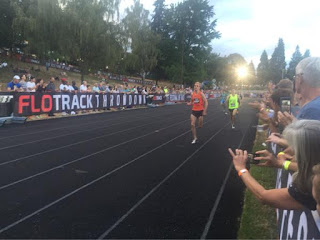 There were a plethora of events going on, including world record holding decathlete Ashton Eaton in the pole vault, but everyone’s eyes were on the men’s mile. (There were some stellar female races as well and I am not shortchanging them.  They just don’t fit the narrative of this article.) Many were stunned when Galen finished fourth overall in this tightly contested race, especially since he has a 3:50 indoor (re: harder to run) mile PR to his credit. More were stunned when relatively unknown Peter Callahan upset the filed in the men's mile, kicking to victory in the final 200 in 3:58.43. Former Oregon runner Colby Alexander was second in 3:59.19. Hassan Mead finished third in 3:59.89.

Three guys, all talented no doubt, all went under 4 minutes in the mile on some random inner-city track on some random Saturday in Portland. I suddenly realized even though I am still in awe of the four minute mile, those times are so fast they are a little commonplace. A little. Then it hit me. I had never once seen someone run under four minutes for a mile. And I just saw three guys do it in the same race.

I sat there for a second and just contemplated how awesome that truly is. If I had run my sub-5 mile, these three guys would have come dangerously close to lapping me. Even-splitting I would have hit the 1200 meter mark at 3:45. They would have been less than 100 meters behind me but on the lap ahead of me. Wow.

The sport of running as a business is alive and well. Races will come and go as saturating points get met but it is thriving. However, the sport of running, ala track and field hangs in the balance. Fortunately, with social media, some of the biggest names are getting their stories heard. They are fighting for rights and causes which are just as important as those which Steve Prefontaine and Kathrine Switzer et al fought previously. Now they are looking for more than just getting paid for running or even getting allowed to run in the first place. Yet, it will take more runners getting more familiar with more of the elites and then showing up and attending events like this one here in Portland last weekend for this process to gain steam.

Running is about pushing one’s boundaries. It is relatively selfish and that is OK. But if we want to see it grow as a sport we, the hobby joggers, need to get invested. We need more people to sit in awe as three random fellas streak down the track to cover one mile in 3:xx:xx.

It will be worth your 239 seconds.