Whenever any movie comes out about running I get all excited. Even movies which end up not being all that good (looking at you, Spirit of the Marathon II) still makes me happy that at least a movie exists about the sport I love. Fortunately, making a movie has never been easier with GoPros and drones and everything else that twenty years ago would have required a Hollywood budget to make. As such, more and more movies about running are hitting the theatres. When I heard a movie about the Barkley Marathons was coming out, I was intrigued to check it out. 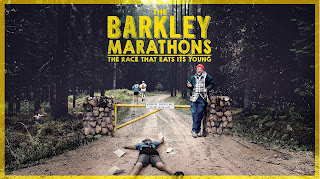 If you are wondering what exactly the Barkley Marathons is, let me give you a brief tutorial. Founded by locals Lazarus Lake (aka Gary Cantell) and Raw Dog (aka Karl Henn)  the Barkley Marathons was originally conceived when Martin Luther King Jr.’s assassin, James Earl Ray, and several other convicts escaped from a state penitentiary in 1977. Cantrell jocularly thought how sad it was that in the time the prisoners were missing, they only made it about 8 miles away. He figured he could easily do 55 in the same time. So, he began putting together a plan for a race in the same rough and tumble Tennessee woodlands that the prisoners had trekked through. (In fact, even though the course changes every year, one regularity is that participants have to traverse a tunnel that actually passes under the very same prison.)  This race would not be like other races.

First and foremost, there really isn't much of a course per se. It is a looped course in only the strictest term of the word loop. Moreover, each of the five loops has approximately 24,000 feet in elevation gain and loss with 2/3 of the course being completely off trail. Supposedly 20 miles in length each loop would grow in length as it went over hill and dale, often reaching 26 miles. Participants are not allowed to use GPS devices to traverse the course. They must landmarks which prove they have been where they are supposed to be (by tearing off pages of books planted there.) There are ridiculous climbs. Thorns and briers are everywhere, making participant's legs look like the stuntman for The Passion of The Christ. Ever-changing sticky hot weather with rainstorms are likely. In other words, there is absolutely positively nothing about this event that makes me want to do it.

And I still enjoyed the movie.

Having said that, let me clarify my conflicting last two statements. I have often written about how many races are falling into the difficult for difficulty's sake category. In addition, I have read that races like ultras with ridiculous amounts of difficulty and adventure races with crazy obstacles are existing in great part because it is easy to hide times in those races. Everyone knows the pace for a half-marathon or a marathon. But throw in a volcano you have to traverse or a spear you have to chuck and you still get the shiny medal without having people see your average for the race was 12 minute miles (or whatever.) I don't disagree with this theory. However, the Barkley Marathons has been around long before this trend started happening. (To clarify, I have no doubt that many people want to take on this race for their own reasons.  But to deny that some of those reasons are so they can look down their noses at those who have "only" completed the Whatever 100 miler, would be a bit disingenuous. At least one of the runners in the race makes that point. Sorta akin to the ol Brian Regan skit of "That ain't nothing!")

I heard about the race when I was running my 52 Marathons from some kind soul who I think felt it was necessary to tell me people did harder things than what I was doing. Unsolicited putdowns are always the best. But when I researched the race I knew I would never even attempt it.  I like to run. Somewhat pampered, too. I can go a really long way at a pretty good pace. But while doing so I don't like to have to spelunk or do any orienteering or carry my own supplies. If I am going to put in a great deal of physical effort, the least amount of mental effort as possible is preferred. However, it is still possible for me to appreciate watching others push themselves to the limits of their boundaries.

This is not to say the movie was without faults. Many of the things I felt about the race played out exactly as I imagined them.For example, Cantrell seems folksy and down home but you can tell he is not a hillbilly hick. His commentary is helpful and at times funny but also smug. He openly admits that he has come nowhere close to finishing the race. When I was in high school, my track coach was a guy who could do the workouts he assigned us. Today, when he has to be at least 55, he can still run a faster marathon than me. When people tell you to do something hard, it is always easier to swallow when you know they can do it themselves. Cantrell can't. Or hasn't. And the mild curmudgeonly way in which he sits back with almost a twinkle in his eye as people put themselves through the grinder is a touch off-putting. It is almost as if he is playing the irascible character in a movie who really has a heart of gold and will teach you life lessons if you just go through the hardships. 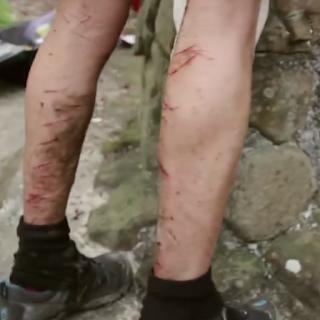 Don't get me wrong. I think he truly cares about the participants. I also think he seems like a perfectly nice guy. He just seems to fit the profile I thought he would. Or he is playing the character well.

Those looking for a lot of gore porn won't really get much. There is one blister popping scene and lots of shots of the lacerated legs, but other than that it is more a testament of the human spirit.  In a race that only has had 10 finishers in 25 years, to get to the end of this movie and have multiple people actually racing for the overall title was very exciting. I will say no more to ruin the ending but it is pretty good running (and editing) to make a 130-mile race look like it is coming down to the wire.

I was surprised to see it had such a low rating on Netflix and was trying to figure out why that was. (Did the filmmakers have vindictive ex-girlfriends?) After watching it, I still couldn't figure it out. It isn't going to win an Oscar but it most assuredly is worth spending the time to watch, even if you are not a runner. You don't have to want to do what the people in a movie are doing to still be inspired by them. Not just in athletics but in every facet of life.

So take a hour and change out of your life and go be inspired. You get to even find out who or what the hell Barkley is. Can't beat that.

As an RD for a 100 miler, I can relate to a bit of the "Laz" character in the sense that I truly do care for each runner, and want to see them succeed, but do so as much on their own as is reasonable. In my event, reasonable means that I do my best to provide great aid stations, course marking, communications, and emergency coverage... some of which Laz definitely puts on the back-burner. That said, I definitely loved the film and give props to anyone who decides they're going to go up against that course.

I watched this documentary in Park City and Laz actually flew out for a Q & A session afterward. He is an interesting but genuine character. I too appreciate the originality of this race but not enough to find its level of suffering appealing. My good friend Jennilyn is attempting to be the first female to finish this year. I agree that even those that don't participate in this sport would still find the movie inspiring.

Such a great doc. I think that even if you're not s runner, you can't help but be inmpressed with the dedication these people have and the total ass kicking they get just attempting this race!