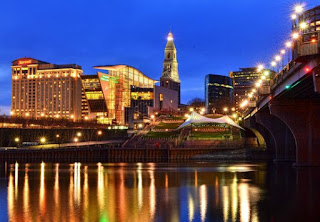 A few days ago I was in Hartford, CT to give a luncheon speech to some wealth managers at TD Bank. I arrived the evening before and got to my hotel ready to go for a little shakeout run.  I had already tentatively planned out a route that would take me from my hotel down to the river and along a riverwalk. Never having been to the area, I was relying on my skills at being able to look at Google maps and discern what makes for a good route. Having worked in the past designing long-distance running relays, I have actually become quite good at glancing at a map and almost uncannily knowing where I should go for a good trot.

I was a little askew in my planning this time, however, as one of the bridges I planned on crossing did not seem to have a way to get across. The riverwalk path ran a good 50 feet below it. As I saw no stairway to get up, I decided to venture further north before eventually turning around. I figured further south another bridge had to have a way to cross.  Evening light disappears quickly in late October in New England and shortly after 6 p.m. it was as dark as it would be for most of the night. 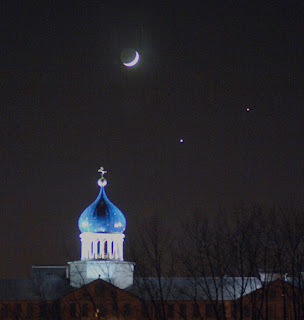 The temperatures dipped and for a person who enjoys running in cold far more than heat, and having just a few days before still had to endure 94 degrees in my new home of Austin, Texas, I was reveling in this chilly nip. Heading back south along the waterway, I figured out what I thought would be a route which would take me across a different bridge and then back along the northerly route of the riverwalk on the other side of the river.

The path, well-lit and recently paved, was obviously for use by all runners and walkers.  As I
undulated over a small rise, some weeds which needed to be tended to obscured my vision on both sides. Up and then down I ran, passing within rock tossing distance of some lattice work of stanchions which held up the nearby highway. A railroad lay next to both of them and the lights cast some spooky shadows on my path. Above them all, off in the distance was this mystical blue onion-shaped Russian-dome-looking minaret striding atop some large rectangular building.

I found my way to the busy bridge upon which the Wilbur Cross Highway passed. A dark ramp allowed me to scoot up and on top of it. I traversed the length of the bridge looking for an egress down to the other side of the river. Suddenly a staircase appeared with at least 10 flights of six steps each.  I had my phone with me simply to be able to check where I was in this new area but here I used it to illuminate each corner as I went down flight after flight, hoping not to trip. 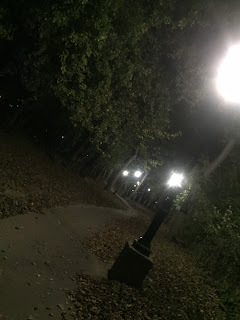 At the bottom I crossed under as dense tree cover and a misty gloom setting in. A man in the shadows in the distance stood silently along the river, seemingly fishing. I saw a path that looked like it had just been paved but I knew it did not go where I wanted. In addition, as it was not lit, I couldn't see how long it went off in the distance. Otherwise I may have added some distance just to check it out.

Crossing over a footbridge I was brought right alongside the water's edge. Up ahead a system of street lights lit the path with their white lights piercing the darkness. I had always wondered why orange lights were more prevalent amongst streets until the internet became more widely available and I could find the answer (Answer: orange light is cheaper even though white light makes things much easier to see. *sigh* Of course, price over safety reigns.) These lights here reminded me of the beginning of Harry Potter and I expected a wizard to snuff them all out as I ran on by. 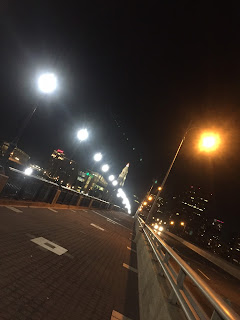 After this jaunt through a park, I passed a serious of parked cars with people of both genders occupying them. Some were eating, some listening to music, some were, well, I actually don't know. It seemed like an odd time to be here in an odd place but I am quite sure they thought the same thing of me, this solitary runner out at night.

I looked over and again saw the blue onion of what I later learned was the Colt Armory. It seemed so out of place settled between the other buildings but I can imagine it looks beautiful in the snow at night. I passed by all the cars and went up a small ramp. Up ahead I saw the bridge which would take me back to my hotel.

As I bounded up some stairs, a large man came down the other side. He looked me over and said "Good job" as I passed him. I gave him a tip of the cap and exhaled a quick "thankyou". I hung a hard 180 degree turn and almost bumped into a guy wearing a black hooded sweatshirt who I hadn't seen. I felt rather embarrassed given how much I try to think of others when I am in motion and hate being inconsiderate, but he seemed unfazed.

Over the bridge, down some stairs, and finally at my hotel, I stopped my watch. A crisp 6.5 miles at
a good clip made me feel good to be alive. While I waiting for my Timex to upload my data to Strava wirelessly, I took in the night. Suddenly, I was absolutely thunderstruck:

If I had been a woman, that run would have been absolutely terrifying. Nearly every step of it. If you are not seeing why (you are likely a guy as well), thenLet me explain why.

Not knowing exactly where I was going in a strange town at night. Tall weeds where anyone could have been hidden. Railroad tresses obfuscating both my sight lines and the light. Dark passages. Blind pitch black turns on staircases. Dead end paths. Passages through trees with no sign of exit. Shadowy figures silently standing next to the river with no face. Random people idling in cars for no particular reason. Large men checking me out. Guys with sweatshirts pulled over their heads on the wrong side of the sidewalk. All of it was lost on me, a guy, while running.

By no means do I mean women are timid or cannot handle themselves. But, by and large, most violent crime happens to women by men. You don't need to believe me. Just look up any crime statistics. And this run I just did was absolutely fraught with opportunities for a bad guy to take advantage of a nice person. 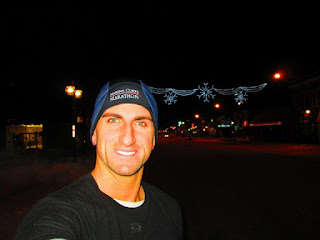 This is not the first time this thought has occurred to me, either. In fact, I am in the process of creating something which is based specifically on the idea that women runners tend to need an extra layer of security when out for a jog. As such, it has been at the forefront of my mind. However, in spite of that, I still forgot how easy it is for me, a relatively large, relatively fast, male to be able to go out for a run, anywhere I want, at any time of the day, and probably be fine every step of the way.

I am not throwing my gender under the bus and acting like I am the only good guy and ladies can love only me.  In addition, there are obviously instances of male on male crime while running (e.g., the absolutely heartbreaking story of Dallas runner attacked by a mentally unstable former Texas A&M football player.) Furthermore, it is not the wild west out there and fortunately even attacks on female runners are rare enough to still be quite shocking. But the fact remains that running while male is something most guys do not even begin to fathom as anything other than safe and secure.

There is no fantastic way to wrap up this article. I have no solution for how to solve violence. I wish crime against all people would simply stop, an idea so quaint and naive it makes me laugh to even type it. I guess I can only hope that someday a day will come in which all genders, of any size, can run down a dark alley or the backwoods and the worst thing that can happen will be you get a side stitch or your iPhone dies.

Until then, be careful out there runners. And women, I am sorry you have to take extra care.
Posted by Dane at 9:33 AM

Thank you for posting this.

I run with a lot of guys who are all much taller than me, and a bit faster. They don't understand why I hate some of their favorite running routes and it's all due to things like going though dodgy underpasses, running though areas with lots of blind corners, and with tall bushes and side trails where it would be super easy grab someone without being seen.

I totally agree with you Dane. I think time and time again, even on the local roads in my seamingly safe neighborhood, that just about anything could happen and has happened. As far as the area you were running in, as a woman I wouldn't even run in that area alone during the day light.

When I travel and run, I try and find a female in the hotel who lives local and runs and ask them for the best safe route. They tend to have the best insight. Thank you for the read.

As a night runner, I appreciate you getting "it" and sharing.