1. I am not writing a review that thorough.  This chap earned his desk.  Egads.
2. I was shocked how I had almost started my review in the exact same fashion.  How I am a writer, that out of the blue, I was contacted by the US division of Loctek, and asked if I would review their new FlexiSpot sit/stand desktop workstation.

So now, even though I am basically thinking I am going to write the exact same thing as ole Adam, I will forge ahead nonetheless. 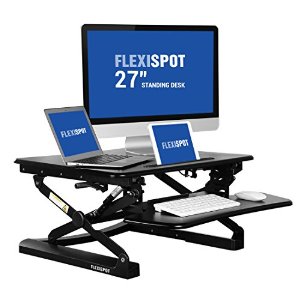 As I was already in possession of two VariDesk's products, which I great enjoy, I wasn't necessarily needing another desk.  But I thought, what the heck.  So I said yes to their offer of a product review of their 27'' model.

When I open the box, I saw that it came in a few pieces, mainly the keyboard shelf underneath would need to be attached. The thing I enjoyed about Varidesk is, that after many moves over the years, many visits to IKEA and many hours spent putting together furniture, that I didn't have to put a single thing together. This is hardly a biggie but hey, it is there.

I mention Varidesk as it is clear that my review of Varidesk is why they got in touch with me and they wanted a side by side comparisons of the two.  The thing is,  their closest comparable is actually the Ergotron Workfit-T given that its key differentiating feature is a straight up-and-down lift mechanism versus the forward arcing mechanism of the Varidesks.

I found that the lift mechanism used gas cylinders, not springs, which made it is similar to the older Varidesk with its limited number of stops. It also made me think that it was going to come alive ala Maximum Overdrive or Transformers. Which would make everything cooler.

Given the desk are a little heavy it does take a bit of a heft to move them from one position to the next, more so if you have more than a laptop on them like I did. Nothing wrong with getting a little exercise but it takes a few attempts to get them moving. Once you have the hang of it, it isn't too bad.  In addition, you probably aren't doing this 40 times a day so who cares, really?

Once assembled, I noticed was a slot in the front of the desk. I initially thought this was the back of the desk and the hole could be used for cords. Then I realized this slot was made to hold a tablet or iPad. Not a bad design at all. Not one I would take use of but innovative nonetheless.

Overall, I found the desk to be very serviceable with a solid pricepoint. I always hesitate to say how much because I know these get read many months later and there are sales and whatnot but I think the 27" model costs $289. This puts them about 90 bucks less than one of the VariDesk I reviewed. I think that both prices are about right.  By that I mean, I think the VariDesk is just that much better of a desk at the price but if you got the FlexiSpot you would be happy as well.