Boston: The Documentary - My Review 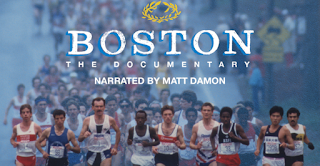 I saw a review of this movie, which bills itself as the "first ever feature-length documentary film about the world’s most legendary running race – the Boston Marathon" which said non-runners may be bored by it. I thought "Who the hell cares? Also, what is a non-runner?" I am so funny.

But then I got pissed at runners because after speaking with dozens of friends all over the country, the one-night showing of this movie (about the race which more or less is the reason any of us are running, tangentially in one way or another) was sparsely attended. This is why we can't have nice things, runners. We are such a navel-gazing society with our bling and our instagram pictures that god forbid we take a night away and watch a movie about running that isn't exactly about us. Supposedly, there are 30 million people in America who are runners. Why whenever I go to a movie about running are there 19 people in the theatre? (Makes me feel better that my own little documentary was so well attended in the few theatres it was shown in.)

But I have gotten off on the wrong foot here. This is a review about Boston: The Documentary.  As I mentioned, I will basically watch any movie about running. Even when I know it will be bad, I will watch it. I go in with moderate expectations and on occasions they are exceeded. With this film I had a little apprehension as the director, Jon Dunham, had done a decent job with his previous work, Spirit of the Marathon, but its sequel Spirit II: Electric Jogaloo, fell rather short. (I am kidding. Well, about the name, not about falling short.)  But it is Boston; you can't mess this up, right? 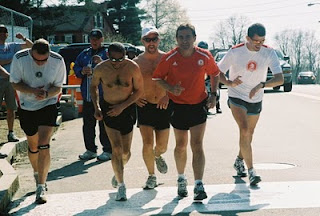 There are probably eleventy billion people who have a closer connection to the Boston Marathon than I do. But I have a small but neat tie most don't. In 2008, after running a 3:01 at Boston, straggling through town, sitting on a hard cold sidewalk, and hoping in a conversion van with Race Director Dave McGillivray, I ran Boston again with Dave and his crew. Only a select number of people have done this very surreal jog and I am lucky to be one of them. As such, I am intrinsically interested in this race even if I have only run it in 2005 and 2008. (I have qualified for it for 12 straight years, though, so that is something.) What I was very interested in was what exactly they were going to do with the movie. How were the going to condense a century and a quarter to one movie?

First, it is indeed a full-length film. Nearly two hours long, (but under, just like the Nike-headed project that is trying to run the marathon under 2 hours) it covers a great deal. While the pinnacle of the film is the 2014 running of the Boston Marathon, it is not all about that race. But this 2014 race, the year after the horrible bombings, does serve as the final resting point for the film. Like running, however, it is the journey that makes the destination worthwhile.

If you are at least semi-steeped in running lore, let alone Boston, you have seen many of the images and know many of the stories told in this film already. That's fine as they bear repeating.  However, when the iconic image of Kathrine Switzer almost being Bill O-Reilly'd by Jock Semple (oh yeah, I'm topical, baby!) which we have all seen a million times, morphed into color freaking footage of the event seconds before it happened, I nearly peed myself. I didn't know that existed! A few other similar instances of well-known images were interlaced with footage or pictures that I bet few have ever seen. That alone was worth the price of admission for me. 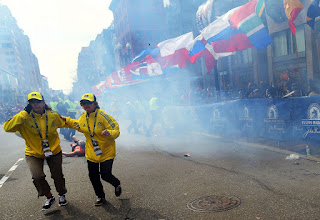 There is definitely some time spent on the horrible tragedy of 2013 and it only took me a few second to remember how enraged I was at that whole saga. I just wanted to both stop it from happening and rain fists down on the two brothers who took something so special from so many.  I am guessing that race will never be a footnote but it is semi-comforting to know that time will hopefully heal a great deal of wounds.

Or maybe that is terrifying, now that I think about it. If that event has a significance which can be lost on future generations, how easily will I be forgotten as well. (Fairly easy, I guarantee.)  But I think that is why this film works so well.  It ties us all together into one race.  It brings all runners into this one shared room allowing us to feel that even once we are gone, our connection will live on in the next person to lace up a pair of shoes.

As the film jumps through time, taking us forward to the 2014 race, and then back throughout Boston's illustrious past, we are given an incredibly comprehensive, but no where near cumbersome, history lesson on this race. Heck, books (plural) have been written about singular years in the history of the 121 runnings of Boston. Somehow tying together so much history without necessarily glossing over important parts is a testament to some good filming and editing. 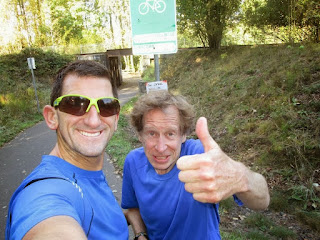 Without a doubt my personal bias comes through when Bill Rodgers is featured prominently near the end. I have had the great fortune and pleasure to be able to call Bill a friend over the past decade. There still is hardly any sport I can think of where a person like me could randomly not only be friends with a legend like Bill but be the one he asks to go on runs with when he is in the town you live in.

The culmination into what unfolded in 2014, with *spoiler alert* Meb winning the marathon in what seems far too good to be true for the city of Boston and America itself, is bittersweet.  At one point, President Obama is giving an invocation of sorts and his rhetoric is well-spoken and thoughtful.  It feels like, even though he is known to play basketball, that he too might have a runner inside of him.  The sting comes when I realized that our current leader would have botched this moment so bad that the film would have been unwatchable. (And if you lament that fact I am talking about politics in a running movie then you missed the point of the movie entirely. From race relations, to charity runners, to women being told they were "not physiologically able to run marathon distances"  every single bit of Boston, and running itself, is intertwined with politics. We may run to get away from it sometimes, but it is always there.)

Fortunately, we are quickly swept back to the amazing moment when Meb crosses the finish line marking the first American victory in the race in 31 years. I obviously knew what happened but still expected Wilson Chebet to nip him at the line. I still get chills. 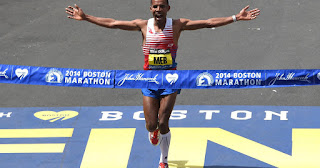 The best way I can describe this movie is that for the last 30 minutes, I had to pee. But there was no way I was going to run to the bathroom and miss a second if it.

If a movie defeats my bladder, then you know it is a good one.
Posted by Dane at 9:08 AM

Bummer that it was so sparsely attended where you are. Full house in Dallas, complete with lots of applause when Meb pulled it off! Loved the movie. Went with about 15 running friends and 3 non-running spouses/partners (including my own). My husband said he even was tempted to lace up his running shoes watching the movie! He really enjoyed it. His only experience with Boston was watching me run, but even with a run-time extending well past his usual bedtime, he was fully into the movie.

Doesn't matter that I knew he won, I couldn't stop telling Meb to stop looking back. Run Meb, RUN!!!! Living in greater Boston, emotions still run high in regard to 4-15-13 but I enjoyed the movie thoroughly.

I wish I could have gone to see it! I ran Boston and experienced the bombing. I returned the next year to show that the idiots who took the lives and left many without limbs that they didn't win. I ran Boston this year and coming home I so wanted to see the film....no showing in St. George, I would have had to go 2 hours to Las Vegas after being gone to Boston for several days. I only hope that I can get the opportunity to see this someday.