I try my best to make even my few random posts about things that are political to be somewhat connected to the world of sport. But when it comes to the embarrassment currently in our White House, I don't even care to make that effort.

A week ago, on twitter, I predicted in a week, Seb Gorka would be gone. I based that prediction on observation, a gut feeling, and conversations with people in the know (earlier in my life I was knee deep in interviews with various governmental agencies.  I'm hardly security-cleared but I am not ignorant to what is going on, either.) My followers, mostly joking but probably hopefully as I made similar predictions about Sean Spicer and Michael Flynn, asked me for another. Well, while I was waiting to send this to a website with a more political slant, I decided to put it here first.

Trump will resign. I wish it would be soon but chances are it will take a while.

Whether Mike Pence, Paul Ryan or anyone else in the line of succession is sitting in his chair depends mostly on the findings of Robert Mueller and his massive team of investigators. Or Mueller could screw the pooch and kick it to Congress who won't follow obvious instructions and say "Wel, Robert didn't say specifically Trump raped Smokey the Bear, so he's free!" But long before they hand down indictments and eons before criminal cases, the papier-mâché thin skin of Trump will force him to resign.

For seven decades, Trump has bullied, cajoled, or overspent most of his opponents. He has never had any reason to do anything else as those who dealt with the fraudulent stain left behind by his cheeto-colored grip-and-pull-handshake were often simply happy to have him out of their lives once he did his damage. But the United States Government has much more time, patience, and money than the short-fingered thousandaire. More importantly, finally, there are people standing up to Trump. And nothing could possibly upset him more (other than learning prima nocta wasn’t actually a thing when Ivanka and Jared got married.)

Arrogantly, ignorantly, and ultimately against his own best interest, Trump will leave the job he never really wanted in the first place. His inability to hide who he is following the tragic events of Charlottesville, his pardoning of Joe Arpaio, and in his Transgender military ban and not being able to address only farm-show crowds of red-hatted simpletons in Harrisburg, PA or other like venues, Trump’s truest colors finally made many of his more moderate supporters blanch. Bear in mind, this revolt is not because those in the GOP disagree with his stances. Rather, they have learned, begrudgingly, you must be more clandestine with your prejudices. 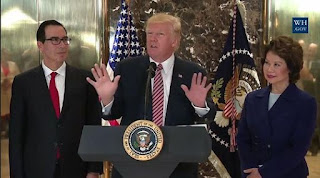 If you want to be racist and let your followers know you are without being obvious, you have to call black people by the moniker of “thugs.” If you want to stifle women’s reproductive rights, you have to pretend you care about a cluster of cells which you will immediately stop caring about the minute it exits the womb. However, Trump has never had to have a filter and even remotely pretending to have one lasted about five minutes as he stood in front of the ostentatious gold elevators of Trump Tower trying to talk about infrastructure but instead calling the alt-right “us.” (Or seeming to, at the very least. Does it really matter if he actually said it? He would deny it two seconds later anyway.)

As such,  the dust-off-hands, blackjack-dealer-change-out moment is coming. Trump will continue to claim he won the popular vote. He will continue to talk about his huge Electoral College victory. But now he will say that the swamp is too deep for him to drain and he has had enough. He will say th witch hunts which he has started have bogged down his presidency.  He will go on rally after rally to ever-dwindling crowds of knuckle-dragging supporters, still getting them to chant "Lock Her Up!" He will walk away thinking that doing so will stop the investigations against him or he will be pardoned even if they don’t. Regardless, the man disastrously unsuited for the job he didn’t want, who was only hoping to create buzz for his brand, is being questioned about the most basic of decencies any human being should have, and he no longer wants anymore of it. And the GOP will not turn on Trump no matter what happens in the 2018 mid-terms. They will milk him for everything they can until the last minute. Remember, they were with Nixon until they weren't.

The countdown to resignation is on. Now whether the investigations into his treason will spark a snap election and a constitutional amendment in order to save our country from the undoubtedly deep connections to his own malfeasance is another thing. But it sure would be amazing. Regardless, before the next election in 2020, Trump will resign.
Posted by Dane at 4:12 PM

So incredibly well written. I believe you are spot on. The count down has begun!

"From your lips to God's ears".

I hope you're correct. Everything you say makes perfect sense. But Trump has never made a bit of sense in his life.