See The Sites, Go For A Run

I once had a discussion with a friend about the word "sight seeing." I was flabbergasted to find out during the discussion that it was not "site seeing" which, to me is the only form of the phrase which makes sense. You are seeing sites. You are not seeing vision. (Yes, I know "sight" also means something worth seeing but "site” just makes so much more sense.) Nevertheless, grammar aside, we came upon the conclusion that the best way to really get a feel for the land around you is on your feet. Preferably at a pace faster than walking. 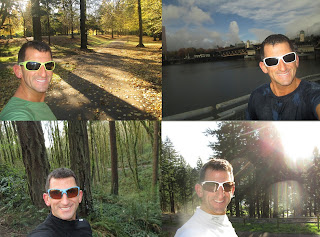 In my book 138,336 Feet of Pure Bliss I have a chapter entitled "This Country is Beautiful". In this chapter I talk about seeing the country on foot. To clarify, I also talk about seeing the whole world on foot. Korea, Italy, the Caribbean. I've come to the realization that the more I see, the more I know I have seen so little. One can stay put their entire life and get to know their little nook so well that a bent weed is noticeable from its ramrod straightness the day before. Or, they can venture out and become acutely aware of the vast amount of things that they know nothing about. Obviously, many choose the comfort of familiarity. I myself barely left a 90 mile circle from my home until I went to college. But fortunately for me, things have changed. I want to see as much as possible and I wanted to do it while sweating, breathing heavy, and exhausting myself. (Get your mind out of the gutters 50 Shades of Grey-ers. I am talking about running.) 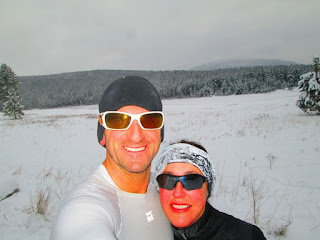 Back in 2013 I made my first foray into the province on British Columbia on New Year's Eve. My best friend wanted to see snow (she is originally from Texas) and I knew Portland wasn't going to get any. So we hopped a plane to Spokane, Wash. and picked a random city in Canada to go and play for a day. Cranbrook in BC was our destination and using my uncanny ability to find awesome places to run, I happened upon the Cranbrook Community Forest. Soft powdery snow and with a temp getting no lower than 18 degrees, it was ideal. Well, maybe not ideal but about as ideal as one can expect for December in Canada.

A year later in late summer, I took another trip to Canada. This time I wanted to take advantage of a rare weekend off and with the weather still nice and headed up to points along the Pacific coast. Vancouver, Whistler, Victoria, Campbell River and all the towns in between were just a few places we hit. (By the by, holy crap are ferry rides expensive. The two I rode on were about 1/3 of the total expenses for the whole five-day trip. No wonder people stay put. As an aside, I saw there is a marathon on one of the islands in the Strait of Georgia that requires three ferry rides to get to. Yeah, 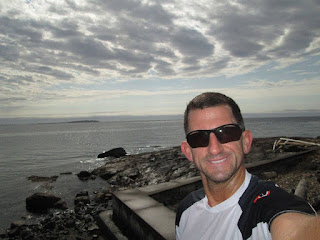 I'll just buy a seaplane, thanks. Must be cheaper.)

But while the 1400 miles of driving allowed me to see some fantastic sites, it was when I got out of the car and went for little six milers that the true awesomeness showed itself. Granted most of the running was planned as exploring for too long just wasn't in the time table, but the nuances of a town or a city are lost when you are in a car. Walking takes too darn long to explore an area. Cycling is quicker but since we live in a rather biker-unfriendly world this means you are always about to become fenderfood and most pay more attention to safety than your surroundings. Running is the perfect blend of safety and speed that allows us to see so much of the world.

It is running that allowed me to check out the Burnaby Lake in suburban Vancouver and learn more about how it is in need of some serious dredging. My shoes took me to pay homage to Terry Fox statues in both his childhood home and also where he would have ended his cross-Canada journey if osteosarcoma hadn't taken his life far too soon. I found an odd bit of art along the Victoria SeaWalk which was hidden from virtually every other view that I would have had if I had not run right next to it. 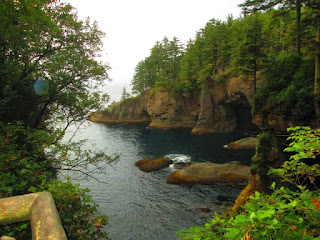 Once I left BC and headed back to Portland via the long way along the Washington Coast, it was oddities like running on a beach in the westernmost zipcode in the contiguous United States that helped break up what would have otherwise been long drives. After leaving Forks, Wash. (home of the Twilight saga - I am Team Dane in case you cared to know) and heading to the famous Hole In the Wall rock formation, I found I could get there and back far faster than the hikers (who looked like they were going on a 7 day tour and not an hour long hike with all the provisions they had with them) leaving me more time to go see other things as well.

This was just one trip to a few places. Multiply that by all the places you can see not only in far-flung destinations but in your own area. Obviously a car will get you to places faster and walking will allow you to take everything in more deeply. But nothing quite melds the best of both worlds like a nice jog through the world.
Posted by Dane at 4:22 PM