Shut Up and Run

I have been told to "shut up and run." I won't. And I am not even remotely sorry.

I am mostly referring to taking a stance in the past few years to all the horrible atrocities which are going on around our country, mostly regarding those which touch on politics and minorities. In 2016, when trump (I refuse to capitalize his name) was showing that he was, at the very least, one of the leading faces of the Republican party, something I had been struggling with for years finally became quite clear. The vast majority of the Republican party leaders are horrific humans, with either zero desire to help this country, or such vast ignorance to how to get it done that their existence might as well be labeled as treason. In many cases, it is obvious their own desires have often led to selling out the American people and this country as a whole. I saw anyone who supported trump as an enemy of me and the things I stand for because, well, they were. I deleted hundreds of Facebook friends, cut ties with real life friends and family, and began to make it clear that I wasn't just a runner who would run. 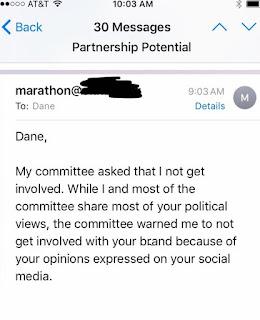 My website has chronicled how my stances have cost me tens of thousands of dollars in speaking fees, sponsorships, partnerships, etc in a post here. I will not go into that again but I do ask you read it. I couldn't have been more shocked to get pushback from people who agreed with what I was saying but refused to get involved. When I saw that reaction I knew I was in for a rough ride. I don't have a "job" per se. I have an occupation. It is one which relies on others to pay me. I was well aware I would be taking a hit in the pocket from people who either disagreed with me or were on the fence but I wasn't expecting it from those who were behind me. And behind me in such a way that they would gingerly peak out occasionally to see if it was ok to even say  "Yeah, what he said" before ducking back for cover.

When you criticize something, those on that side always retort with the "Yeah, well you would say that! You are a [opposite of what they are.]" When I criticized the Republican party, the flamethrowers on the right seemed to not realize that until 2016 I was a registered Republican. When I pointed out the problem with guns in America, the ignorant labeled me a a libtard snowflake. This ignored the fact that I absolutely love shooting guns, grew up in a part of the country where I thought the first day of Buck Season was a national holiday, and absolutely know more about guns than most of them. (I'd link to my tweet thread about that but, well, I will get to that in a second.) I detailed greatly how I knew who the trump voters were, especially the real hard core ones, because I lived amongst them for the first two decades of my life. They were my classmates, teachers, grocery clerks, repairmen, etc. After all that time living with them, and the years since then hearing why they supported trump, I didn't need any new information on why they were doing what they did. It was all quite clear.

For over two years now I have taken deep personal financial hits. I am not lying when I say it would have been SO much easier to keep my mouth shut. I am a white, straight, male. There is literally nothing better to be in today's world unless you want to add "rich" to the front of that description. Nothing is truly against me. Disagree? Well if you are any of those things, if given a genie in a bottle, would you change them? If you said yes, you are lying. The world is set up currently to make it far easier for someone like me to succeed.

But I was given a small niche of fame. A little corner I carved out by being semi-athletic in a sport which has a lot of people in it. I did a few things no one has ever been able to do before, was articulate enough to write about them, and gained a following. I took a huge risk by being so outspoken.  From ending a personal goal of running a marathon in every state at 49  by boycotting North Carolina until it resembled a democracy again, to all the things I have already mentioned, I knew I was risking a livelihood. 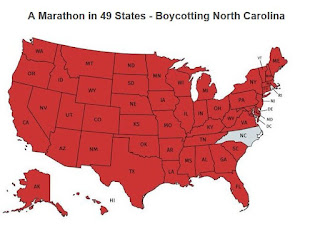 A sponsor with whom I have been working with since 2009 up and disappeared. Every other athlete that remained on their roster said not one word outside of "I like sports!" and toed the company line. I continued on. Through Twitter I amassed a sizable following and felt like I was helping make a difference. From supporting the crisis in Flint by buying t-shirts to rebroadcasting stories to my followers who might not have seen them otherwise, I still tried to keep as many of my athletic endeavors on the forefront as well. I did not wish to just be a provocateur but someone who also inspired and empowered others.

Then my Twitter account got indefinitely suspended. Why? Because I dared call out a white supremacist. Suddenly, one of the venues I had cultivated to get out my message, to earn paychecks, and do what I could was taken from me. Recently, I had begun to regain support from groups and organization who liked my overall message. A few paychecks came in. Things were looking better for me to continue to do what I do. Now, who knows?

I received death threats on Facebook. I received trolling on Twitter. I wanted to tell these people that I take them seriously but I am not one to stop. I have been dealing with assholes online for a decade. I have had people come after my livelihood, my friends, and my family before. In other words, bitch, I am the one who knocks. Do you really want to test the resolve and endurance of a person who ran 202 miles straight? Is questioning the intestinal fortitude of a man who competes in highly taxing athletic endeavors with Gilbert's Syndrome, a liver disorder that more or less says what I have done should be impossible for me, your best bet? 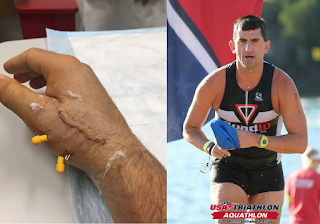 My point is, if I haven't stopped yet, I am not going to. I do not put myself on the same level of people like Colin Kaepernick who risked his entire NFL career to take a stand. But I also didn't have a few million in my pocket when I started doing what I was doing. Nor did I have the national media there to potentially help elevate what I was doing.

Instead, I will continue to do what I can with what I have. I will fight for those who are not me. I will show compassion for ones with less, who have had so much taken from them, or never had anything to begin with. Ideally, I would love to simply talk about the tough times while running the entire coast of Oregon in a week's time. Or coming back from having been attacked by two men who fractured my face and hand last summer and qualifying for the U.S Aquathlon team. But I will not shirk the responsibilities that come with having more, of being able to do more, and pretend others do not matter.

If I can't make rent, or have to sell my car, or anything else, I guarantee you, I have been in tougher times. I grew up in subsidized housing. My father was crippled in a hunting accident right before I was born. My mother, who was bed ridden for three years a child with rheumatic fever had two open heart surgeries by the time she was my age to fix problems which stemmed from that illness. I'd obviously rather not suffer and struggle , but even when I wonder how I will pay for groceries sometimes, I at least warm myself inside by the knowledge I am doing what it right.

Want to see me shut up and run? Catch me in the middle of a marathon. I tend to talk less then. Otherwise, grab a chair because it is going to be a long ass wait.
Posted by Dane at 11:21 PM