I wasn't going to write this recap because quite honestly, this is the tenth one of these I have done in the last two years and it is getting a little difficult to come up with something interesting to say about a race that almost always churns out the same result for me.  However, I decided that, in and of itself was the interesting part.

If you have read any of my other recaps of this series the race is a simple format: a 750-meter circular swim of a quarry and then three loops around the trail around the quarry. What is interesting is that outside of one major outlier which was my first race back after being assaulted last July, the vast majority of these races have been clustered together time-wise. Yes, it is a short-distance race so the time shouldn't be all that different per se but with a sample size large enough and participants who repeat the race often enough I was able to see that I seem to be the one with the smallest change in my time. 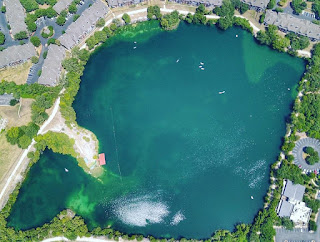 For instance, in this race, the hottest of the ten I have done, I wasn't expecting too much. I had a nice swim at the Deep Eddy Mile a little over a week ago that didn't go as well as I had hoped but had been the culmination of my harder swim workouts for the summer. (In the cool water of Deep Eddy pool, I took 5th overall. It was slower than I expected but virtually everyone I spoke to said the same thing.  A 33 1/3-yard pool is definitely hard to figure out.) After that I had stopped swimming a bit and began to start to focus on running more for the fall races I had coming up. Yet somehow, in bathwater temperature quarry water, I swam close to my fastest swim yet.  But once I got out of the water the heat just smacked me around.

Last month a fella who has become a bit of a rival hung on my back for 2.5 of 3 loops before passing me. This month however, I only held him off for one loop. I could tell I didn't have it and wasn't going to push too hard.  I have a half marathon this Saturday which is going to be a barometer for how my fall is going to go and it was much more important that eking out a few more seconds in this race.  So for the most part I just kinda ran it "easyhard" and finished out the string. Then at the end I see if I had just been ten seconds faster I would have run my fastest time of the year! What the heck?!

When I ran my first of these last year in just a hair over 26 minutes (26:02) and the next month ran 25:48, I assumed I would be in the 24s not long thereafter. I haven't broken 26 since. It is an interesting thing to see. I have next to never raced the same course so many times. I know exactly what to expect. There is no unknown. Yet getting faster eludes me. Granted, because I keep ridiculous records of everything, the temperatures for the races in 2018 have all been higher than they were for 2017, but I would still like to see improvement.

There are still two more of these to go for the year. Maybe by the last one in October it will be in the low 90s. *le sigh*


Next race is a half-marathon in Wausau, WI. Shockingly this is only my second half-marathon of the year. The weather looks like it will be much more hospitable to me there.