Book Review: When Running Made History

I decided to read a book a week for 2019. Hardly a lofty goal and when you see what 52 books looks like on a shelf, it makes you sad to think that is all you have read. But it is a goal nonetheless and one I have kept so far. One week! Whoo! Steve Holt! 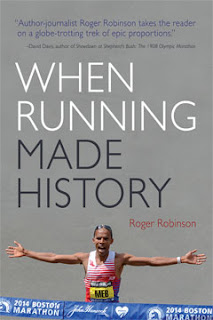 First on my list was the tome by Roger Robinson entitled "When Running Made History". I thought about saying how I would be biased in writing this review as I am lucky enough to call Roger a friend. Then I realized how often we misuse the word "biased". Just because we have a connection to something doesn't mean we are biased to it. In fact, like when people say, "Well isn't that pot calling the kettle 'black'", I have always thought "Well, is there anything more qualified to call a pot black than a kettle?" In other words, I love running, have tried to be a student of the sport since I became a small part of its history by running 52 marathons in 52 weeks, and the fact that I am reading and reviewing a book by someone who has forgotten more about it than I know simply means I am choosing my sources correctly. Having said all of that, let me give you my review.

I have read a few other of Roger's books and have thoroughly enjoyed his writing style. A rather learned man, he writes with ease and eloquence I could only hope to emulate. In fact, when I read his writing I can hear his posh British accent enunciating every "t" and accenting each syllable articulately. Roger is a literary scholar, elite runner, sports commentator and journalist, and this book is his account of him crisscrossing continents while recording sixty years of seminal racing moments that he observed in one or more of these roles. He is involved in so many amazing events that he is the reference point people should use when they mention Forrest Gump to show that they actually know an existing runner rather than a fictitious one. 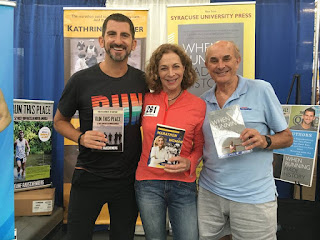 Lest you think that the book reviews moments in running which are historical for running, let me disabuse you of that idea. Rather, this is an account of when running itself as a sport transcended the footfalls of runners and addressed much larger topics, ideas, and movements. Whether he is regaling you with tales of running in Berlin at the time of German reunification in 1990, organizing a replacement track meet in New Zealand after the disastrous 2011 earthquake, or the triumph of Ethiopian athlete Abebe Bikila in the 1960 Olympics in Rome, Robinson is not talking about how running is neat. No, he is showing how running has been instrumental in either making by itself, or helping to push along, massive social change. Roger need look no further for such inspiration than his betrothed since he is married to Kathrine Switzer who (and if you are reading this and don't know, I mean, wow) in 1967 became the first registered female to compete in the Boston Marathon.

I read this with rapt attention and even a bit of smugness given how much Roger and I agree on so many things. Rest assured, we disagree as well (he does not care for the Nike-sponsored Breaking 2 attempt to run under two hours for the marathon, whereas I thought it was awesome) but those are few and far between.

Getting this ringside seat to decades of running escapades which have created the world in which we now live is a treat. Reading it from one who can put it in such a way which gives it the necessary loft it deserves is even better.

Roger is lucky to have seen so many events up close; and running itself, because of this book, is lucky Roger was there to see and share them with us.
Posted by Dane at 11:11 AM