Lifetime Splash and Dash 1 of 6 Recap

This is now the third straight year I have done this series here in Austin. When Lifetime Fitness bought the gym, and quarry, I guess, which this event took place in I wasn't sure they were going to have the series again. But they did (with the respective price hike) and I figured I would sign up and test my monthly mettle.

The weather looked about the best it could for most of these races with a cloudy 78 degrees with a slight breeze and relatively low humidity. That all made me rather happy. I was extremely curious, however, how this race would go for a number of factors. First and foremost, I have not swam one single stroke since I finished the last of this series in October of last year. Not one lap. The vast majority of the reason behind that was the second factor - I am currently in the middle of the longest streak of running I have ever had in my life, by a long shot. I wrote about surpassing the 100 day mark and that was more than a month ago. Keep in mind my previous longest streak was 48 days.

In previous iterations of this race, I had rested the day before the event and taken it easy the day of.  On Sunday I blasted out a 12.5 miler at 7:10 pace and then Monday I ran another 8.3. The morning before the race I did a leisurely four mils but it was four miles nonetheless. Basically, here I was in the middle of no rest, 133 days into a running streak, and taking on a race.

That said, I have lost upwards of 15 pounds this year with a new way of eating, new running, and a few other life occurrences. Now I simply had to go do the race and see how it all fell into play. So many new factors to have fun and obsess over. 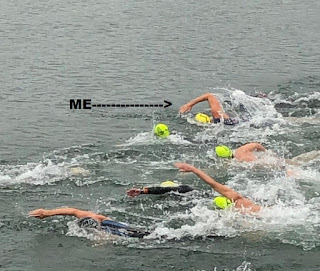 With no swimming lately, I was curious how it would feel in the water.  As the temperature was 68 degrees in the quarry, I was pleased as punch we wouldn't be swimming in soup. Unfortunately, I swam fairly poorly when it came to sighting. My goggles fogged more than they should have and I found myself way off course on a few occasions. Obviously that bummed out a bit. But other than that, the 183-day layoff from swimming didn't seem to hurt me any as even with the non-straight-line swimming, I swam my fastest swim ever. Not by much, but a 12:11 swim and transition was one second faster than I had ever done before. I can say I was definitely surprised by that and have to attribute it to both the cooler temps and the wight loss. I easily lost ten seconds swimming off course and with exactly half a year since my last swim, I cannot complain one bit how this went.

I came out of the water and saw that two of the swimmers in front of me were still putting on their shoes. I do something different than most by wearing socks during a swim. I hate running without them and trying to put dry socks onto wet feet has always confounded me. One of these swimmers got going and soon thereafter another did as well. I had designs on tracking them both down but it all depended on how fast of runners they were. Having done this series numerous times, I have seen some extraordinarily swimmers who can't run at all, some who are middling, and some who are good swimmers but better runners. I can't keep track of all of these younguns that live here in Austin, especially as some of them have sprung up half a foot since the last time I raced them, so I did not know which these boys were.

We crossed the timing mat and now was time to see what I had in these running legs.

As I took off after the two runners, it became clear the latter out of the gate was faster than the former. He also appeared to be faster than me.  But I knew I could catch the other runner and it was just a matter of real estate when I would.

This first lap is always the most enjoyable as there are no other runners to run around.Well, there are no others in the race. There are other people on the course as it s not closed to the public, even if the public is only Lifetime gym members. To be honest, if I am paying for a race, I'd like for it not to be open for the public, especially in a tight space like this. It is just half an hour or so once a month to close it down.Shouldn't be that hard to ask. Especially when someone was out walking their damn dog on one narrow part on the south end. You see everyone else, right?

I closed the gap on the one runner as we closed in on the end of the first lap. I crossed it in 4:19 and was beyond excited. In all of these races, I have never broken 4:20. Did I try too hard on this first lap? It didn't feel like it. I could only wait and see. 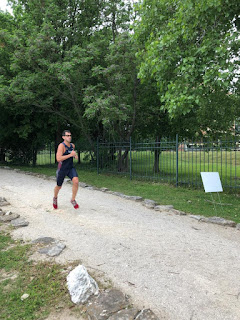 This is not an "easy" course as I have stated before. It is relatively narrow path for half the course, with uneven footing, roots, and twists and turns. Low-hanging branches threaten to knock heads off and when you hit the second lap with all the other participants now on the running path, it gets kinda dicey. Without fail there are some people who, time after time I can count will run directly in the middle of this path, regardless of the fact that they MUST know people are passing them. Alas.

I used a surge to pass the one runner in front of me at the midway point of this second loop and kept surging. Don't pass until you are ready to make it stick, I always say. As a slight tailwind helped up up the backside hill, it appeared that this was where I was going to stay overall in the placing. I crossed the mat for the second loop in 4:17 and got very happy. What could I do on this final lap? 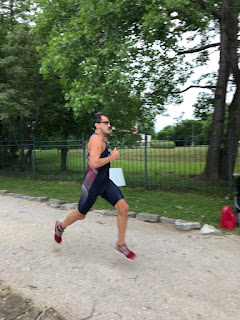 Unfortunately, it was even more crowded now and with slightly tired legs once had to be more careful not to stumble while avoiding people. As I hit the midpoint of the last loop I saw two guys in front of me. I had a feeling one of them was a loop behind me but the one in front of him gave off the vibe of a runner who was almost done. I began to push hard and with a quarter of a lap to go passed the one guy. The second was coming closer but it was hard for me to want to push past someone who I was unsure of whether they were about to be done or not. Nevertheless, as we hit the final straight away, I began to throw down a little bit but I think he felt my breath. Even though I was gaining, he kept a small margin between us. He passed the finish and stopped.

Drats. He WAS on the lap with me. I passed four seconds later and stopped my watch. I had ran a 4:15 final loop and my overall time was 25:04. I couldn't remember my previous times.Was this good? Bad? Somewhere in between? I had convinced myself so many times of what I know I could do on this course that what I HAVE done gets mired in the mists.Upon checking my past results I saw that I had run my fastest time ever by 41 seconds!

I was a happy bunny. I ended up winning the Masters Division, placing 9th overall in the men. Three women beat me and while two of them beat me handily (90 seconds by one and 40 seconds by the other - the third just by 20 seconds, all ) it really is hard to race people you don't know you are racing. (All finished behind me because we did wave starts and it was their chip times which were faster.)

All told, this bodes well for me in the near future. I am aware it is going to only get warmer here in Austin over the next few months but with the construction of a new pool in my neighborhood, I am planning on really improving my swimming. I know that in my prime I swam nearly as good as the top overall swimmer whose combined swim and transition beat mine by 2:33 today.  Let's say I can't get back there but if I just cut that in half I am now about where I thought I would be in these races and that doesn't even count if I improve in the run. In other words, after my first race in nearly five months, which might be the longest drought I have gone without racing in thirteen years, I might be onto some good times.

In fact, just to test that out, I am entering a triathlon on Saturday which will test me for sure at the No Label Triathlon.With just a 300 yard swim, 13.9 mile bike,and 3 mile run, this is a sprint which is not in my wheelhouse. But hey, just because I haven't biked since August 27th and haven't completed a triathlon in 3.5 years doesn't mean I don't expect to excel.