After not writing a recap for my last aquathlon and the Deep Eddy Mile (just didn't feel like it) I thought I would have some good news to share for this race. We had a slight break in the Texas heat and I have been running well lately. Both of those made me feel like it would overcome the fact that I haven't swam a stroke since the last aquathlon a month ago. I won't bury the lede. They didn't. 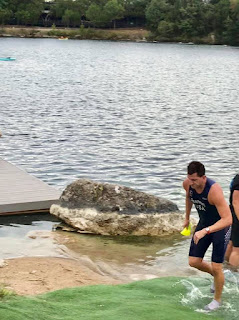 I had my worst swim of the year which wasn't atrocious (it was faster than every other swim of the 18 but one that didn't happen this year) but it was also my worst. The 89 degree water didn't help and having to battle one fella who was more or less the same speed as me and gave me a couple of good kicks at one point didn't help either. I spent the first 50 meters trying to get some water out of my lungs and nose but all told I just didn't have it. I tried to surge here and there but then was met with lethargy. During the transition I had a slight stumble with cost me five seconds as I tried to put my shoe back on. When I headed out for the run and saw 12:26 on the clock, when I was hoping to finally get a good swim in and be a minute faster than that, I knew my day was cooked.

During the run I saw absolutely no one. I will have to check my recaps but I do not recall NEVER seeing a single person to try to track down. As I made turns around this trail loop which has been my nemesis ever since the first one of these I did 18 races ago, I saw no one was catching me from beind. Wanting loops as close to 4:10 as possible when I actually ran 4:31, 4:40, and 4:29 can more or less tell you how my day went.

With a finish time of 26:08, I had my first over 26 since last year, didn't improve nearly as much as I had hoped and found myself running basically the same time as I had in the very first one of these in early 2017. I know what I need to do to get faster.It requires me to get into the pool. The fact I can be like the 8th fastest out of the water based solely on athleticism and muscle memory with zero training should make me happy. But it doesn't. However, I know that running is my priority. (Although, I will say, in my defense, the fact that the regularly-scheduled-to-be-finished-in-May new pool just half a mile from my house never getting finished AT ALL played a small part in me not getting my laps in this summer.)  I have a marathon in Austria in two weeks that I have been fervently trying to prep for the best way I know how in this Austin heat.  I might eventually get all my laps down to 4:10 but where I am going to make the bulk of my time against he upper echelon of this aquathlon group is in one obvious place: the swim. 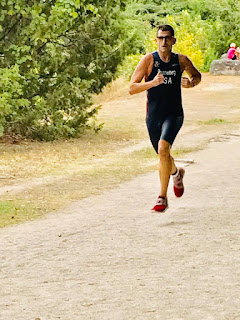 One competitor who, by beating me here on this day now owns a 3-2 head-to-head matchup against me this year, routinely beats me out of the water by 30-45 seconds. But when I beat him, it is because I can make it up on the run. If I can just get my swim close to his, he wouldn't even be a problem. But life is about priorities. You can't be bothered you don't have a faster swim if you focus on running, DANE.

There is no October race this year which is a bummer. The weather actually has a chance to be palatable in mid-October.  But without that I can really just keep up my running.  Hopefully I can keep this year of the most miles I have ever run going and turn it into some fast late fall races.

I am sure this aquathlon series will be back before I know it!