I recently found myself in Europe where Austria, Germany, and Switzerland all are just a few miles from each other at the southern tip of Lake Constance. I was here because one of my clients chose a marathon that went through these three countries as his first and when it was brought to my attention I couldn’t pass up the opportunity to explore this geographical anomaly as well. While scrutinizing the maps, as I am wont to do, I noticed that the country of Liechtenstein was just a few miles away from the confluence of these other countries. I knew that even though I’d be running the marathon I had to find a reason and a way to tack on another country less than 48 hours later. I mean, a one day break before the marathon and another 30k is enough, right? 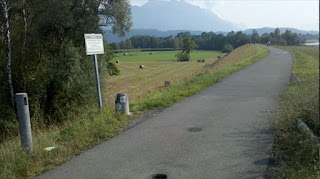 While searching for the shortest possible way to get from Liechtenstein all the way back to where I was staying in Austria I found a tiny little road that left Liechtenstein and joined a larger road in Bangs, Austria. Soon thereafter that road crossed the Rhine River and entered Switzerland. And by "soon thereafter" I mean one mile is all you needed to go through three different countries. Technically, I could have stopped there to get my three countries in one run but I figured I need more than four laps of a track to count as a decent trot. (Also, upon further review I see that you can not only follow a bicycle path that goes through all three countries in .36 of a mile but there is a point in the Rhine called the Dreiländereck where all three countries meet!)

My original plan was to cross from Austria into Switzerland over the Rhine River and take a bicycle trail all the way to Saint Margrethen. From there I would hop on a quick half hour train to get me back to my hotel in Lochau, Austria.

However, as fate would have it, I met the CEO of SkinFit, an apparel company that I was in partnership with for this marathon that I was running a few days before this run. He mentioned that the route I was taking would put me mere feet away from their offices and that I should stop in for a tour. Knowing this would be about 7 miles into what was turning into at least a 17 mile run I figured the small break would do me well. Silke, one of the SkinFit employees, generously volunteered to take me to the start of my run the morning of. She had just run the half-marathon herself so was surprised I was doing another 30 km run. I said I couldn't pass up the opportunity for such an adventure. 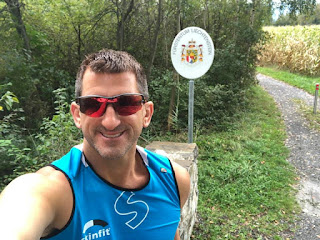 We made our way down the highway and the weather looked just amazing for this run. Cloudy, in the low 50s and just way more pleasant than I have experienced any time in the past six months in Texas. Silke dropped me off near my starting point and I walked the remaining meters to a small stone bridge which went over the smallest of streams. If not for a country crossing I doubt this bridge would even be here. A small shack of some sort was positioned to the right and I was hoping it was a bathroom. It definitely was not any sort of border patrol. As I got ready to run and take a selfie to commemorate it, in the middle of nowhere, after seeing no one for a miles, a man and his dog came around the corner. We truly aren't alone virtually anywhere in this world anymore. I snapped a photo and away I went.

I quickly entered Bangs, hung a left and scampered down the road to the bicycle trail. A quick ramp up took me right alongside the Rhine. A well-maintained bikepath lay in front of me and I was far from the only one using it here at noon on a Tuesday. Cyclists were abound as was a random car which seemed to be tending to a small herd of cattle. I am not exactly sure how the car got here but my German isn't strong enough to ask the fella doing the tending. 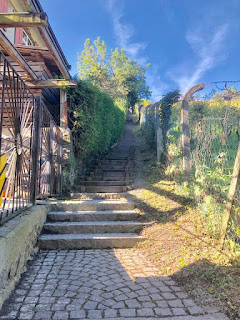 Three miles later I passed over the Ill River, a tributary of the Rhine and was roughly halfway to my first stop of the day at SkinFit. I wasn't aware that his tributary passed through Feldkirch, a town I had been exploring the day before on my "recovery" day. Recovery included trying to find a zoo and encountering 390 stairs that I decided to hike. Ooof.

The weather continued to be just perfect and even though I had a very light weight SkinFit Ranna jacket tucked into my Camelbak pack, there was never a need for me to pull it out. The next few miles were just as uneventful as the ones behind me. In addition, I was running surprisingly spryly, maintaining roughly an 8 minute mile.

Eleven kilometers after I left Liechtenstein I found myself at the foot of the SkinFit offices. A new-to-SkinFit employee, James Lamont gave me a tour which allowed me to see how the product was made and how it was sold. They had a very interesting business model for sure. I could see given the care and quality that went into each piece of clothing why they were priced a little bit higher than most people who are looking for bargains will wish to pay. After the tour and some discussion about exercise in general, I was told that another employee of SkinFit, Florian, would be guiding me along my destination for the next few miles. I tried to express how I was hoping to run as short a distance as possible but they were also interested in showing me another geographical anomaly. I had come all this way and decided there was nothing wrong with tacking on a few more miles. 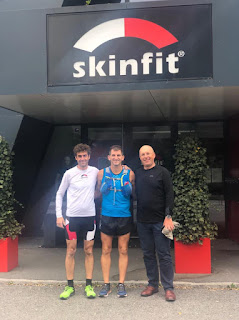 This extra mile segment included the bulge in Switzerland called Diepoldsau. The only part of Switzerland that lies east of the Rhine River, this area was also a crossing point for Jews escaping Nazi Germany. Thousands of Jews were saved despite the general Swiss policy of restricting Jewish escape during that time. One man, Paul Grüninger, saved the lives of up to 3,600 Jewish refugees from Germany and Austria by pre-dating their visas, enabling them to migrate 'illegally' to Switzerland.  Take that, Schindler! (Seriously, kudos to both men, obviously.)

Florian guided me through this area which would have been rather tricky to find by myself. In fact we even got a tad off track adding a little more mileage to my ever-lengthening run. But soon we crossed the Alter Rhein and here is where Florian gave me the quick history lesson I addressed above.  He was often apologizing for his "less-than-perfect" English, and I said that if he wanted to see less-than-perfect, we should have a conversation in German.

When we officially crossed the Rhine, it was a border crossing that somehow was even less impressive than the one I had started my entire day with. A few planks of wood were placed down in a small stream section of the river and as I crossed Florian pointed to one side and said "Austria" before pointing to the other side and saying "Switzerland". Pretty darn neat. 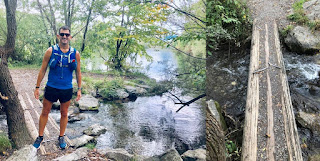 At this point it was time for him to return back to work and time for me to finish the last seven miles of my run. We parted ways, he told me to keep up my fight against the current political administration in America (as I assured him most of us hated what was going on here) and now I just had roughly 10km to go.

Four miles later I found myself leaving Switzerland to cross into Austria for what would only be a half of a mile. Then I would finally cross the Rhine proper (for the first time and head back into Switzerland. A quick stop at a convenience store to down a Coke for calories meant that I only had three more miles to go. I sat outside of this shop, contemplating the $3 I had just spent on roughly a can-and-a-half and how fortunate I am to be able to do what I do. I work hard for sure, but at 43, I am 12 years older than the last time my father had use of his legs. I am fortunate indeed. Doesn't mean I can't be tired though and man I was ready for this run to be over. Away I went.

The weather had been intermittently sunny and cloudy with a spritz of rain here and there but the final two miles were a brisk 52° with a bright sunshine and slight wind. Up ahead I saw where I would be ending my run even though I had another mile to walk to the train station. If I hadn’t stopped where I did, in another 200 yards I would’ve left Switzerland once again and entered Austria. In fact, if I hadn’t been so tired, I would’ve noticed that two days earlier I had ran on this exact same stretch of road at mile 17.5 of the marathon! 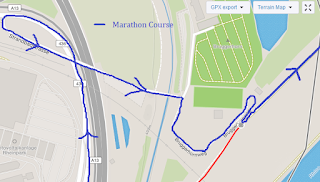 All told, I ran 18.5 miles and maintain that there really is no better way to see this world than by our own two feet. I sincerely hope to be back to this area for a multitude of reasons and races. This time it will feel like home.

Thanks again to the people of SkinFit, the Drei-Lander Marathon and the people of these four countries for making this trip so enjoyable.
Posted by Dane at 1:20 PM