How to Lose a Marathon - A Book Review

*I was fortunate enough to exchange books with the author of this book I am about to review.  That means, of course, given how I plan to totally use his limitless contacts, I will only laud praise on Joel and his tome.*

If you believe my review will be based on receiving the book from the author, you know nothing about me and how I operate. Which, given this is the internet, has never stopped anyone from doing just that. But on with the review! 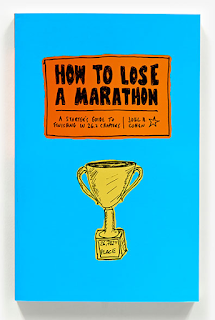 I dove into this book immediately after receiving it, needing to just lose myself in reading. Three hours later, with a little texting to friends to interrupt me, I was done. How To Lose a Marathon by Joel Cohen, a writer on The Simpsons, was a quick-read delight.

Mostly written in a tongue-in-cheek tone, with great turns-of-phrase, Cohen recounts how he undertook his first marathon and his voyage there. I say tongue-in-cheek because he mentions how he couldn't find any books out there for the beginning runner and, sweet fancy moses, beginner running books are a dime a dozen. So, thinking I was about to read another first-time runner book filled me with a tad bit of trepidation. No offense to any newbie runners whatsoever but there are few jokes about fartleks or Phidippides "dying" I haven't heard yet. Fortunately, just a few pages in my fears were waylaid. (A reminder that good storytellers are good for a reason and how many athletes don't necessarily make the best speakers/writers.)

After deciding to do some running and putting in a few miles, Cohen figured he would make the New York City Marathon his first foray into the marathon distance.  However, he soon found getting into a race that everyone else wants to get into can be a bit difficult.  He then learned about the charity route and his next decision enamored him to me. Instead of asking others to contribute to his fundraising, he wrote a check himself to cover the entire amount. Obviously not everyone has the means to do that (and he readily admits as such) but "the idea of asking people to donate to a charity I chose so I can do something I wanted to do didn't sit well." Given how I have often bristled at how "raising money for a good cause" has been code for "pay for my vacation to run a marathon in Hawaii or feel like a bad person" this was music to my ears. *insert Benedict Cumberbatch hat tip gif*

The book is filled with humor as Cohen quickly progresses from barely being able to run a mile to planning his first marathon. To be honest, while he is self-deprecating in his ability, Cohen's progression is quite impressive. With his main stated goal to beat Oprah's marathon time of 4:29:20, I wondered if he would. That's not a fast time. But it is also not a "bad time", either. Hell, my first marathon was a 4:12. So I was hooked into reading whether he would have a glorious first marathon or a crash and burn (like mine was.) Given he was going from the couch to the marathon in just the span of a few months, I thought it might be the latter.

This is not necessarily the book one will want to buy for training tips.  But it is if you want to laugh. We type "LOL" in conversation and rarely mean it.  However, I literally laughed out loud at multiple times while reading. I won't ruin them all but when he described "chip time" as "What I scream out every time I open a bag of potato chips", I guffawed  How, in 20 years of running marathons, has "chip time" never once sounded to me like an exclamation!?  Kudos, Joel.

As the book concludes with an almost mile-by-mile recap of his first marathon, you find yourself cheering for Joel to get his goal. Whether he gets it or not, I will leave for you to read yourself.  (Seriously, buy a book for god's sake. Support the arts. Get a few of mine while you are at it.) Suffice it to say that it appears that in spite of not considering himself a runner or really enjoying running during the act, he ends up being a runner nonetheless.

A belated welcome to the club, Mr. Cohen.