Book Across the Bay Recap

I just moved to Minneapolis a week ago. My movers are still in the "We will notify you in 1-2 days when you can expect your belongings" phase. (They are about to get put on blast.) I have a variety of cold weather clothing in my moving boxes but just barely enough with me to get by. In addition, I haven't had any real desire to race in like two years now. All this did not put me in prime position for what happened yesterday morning.

I asked my friend Candice what she was doing that evening. She told me she and her boyfriend were doing a snowshoe race in Ashland Wisconsin, which 3.5 hours away. For whatever reason, within half an hour, I was in the car, signing up for the race over my phone and making snowshoe reservations (The only pair I own, which I won, and have never worn, were, you guessed it, in the moving boxes.) I left shortly after noon and the race began at 6 pm. I had to get my shoes, get to the packet pickup, and then get to the start of the race. It was exciting and invigorating!

When I got to the snowshoe rental place, I found out since I was planning on returning right after the race to my home (yep, 7 hours of driving for a 10k race) and they would likely be closed when I finished, they couldn't rent the shoes to me because I had to be the one who personally returned them (I was going to have a friend or someone return them the next morning.) Bollocks. They did, however, have some for sale. I looked at what I was going to rent, which looked like the size of garage doors, and the racing ones they were going to sell me, and decided I might as well bite the bullet and get me some racing shoes!

The race began in Ashland, Wisconin, where I was buying these shoes, but ended in Washburn Wisconsin, where the packet pickup was. You parked at the end and they bused you to the start, so you would be near your car when you finished. Excellent idea but it was leaving me with diminishing time to get ready.

I pulled into my parking spot and then began changing into my cold weather gear in my car. I have no idea why I didn't wear it up to the race but I figured all that driving with tight spandex on wouldn't be that comfortable. Somehow I managed to get all the gear on without flashing all of Wisconsin and jumped out of my car ready to go get in line. More than a few people commented on my Texas license plate with remarks of "Slightly different weather, up here, eh?" To which I replied "Don't cha know!" I can speak the tongue, people.

It was a pretty seamless packet pickup and before I knew it was heading to the buses to go to the start.  I saw that the vast majority of people were skiing and not snowshoeing but that virtually everybody had a buddy. Poor Dane was all alone on the bus but at least I got the seat to myself. 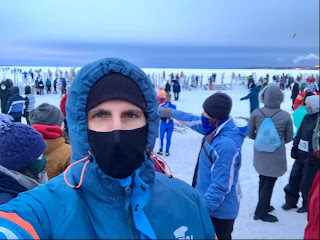 At the starting line, there was a large tent set up (thank goodness) and with nearly an hour to kill, I am glad that at least human bodies create some heat, as they didn't have any heaters in the tent. As this was only the second time I had ever put a pair of snowshoes on my feet (the first was a race I did in Oregon seven YEARS ago) I had seeded myself in the second wave of runners to go out. I always try to respect the talent level of people who may be more experienced than I. I've found in 20 years of racing, I seem to be about the only one who actually does that.

One last minute bathroom break, then I jammed my winter jacket into a bag that would be transported to the finish, tightened my snowshoes way more than they ended up needing to be tightened and I started shuffling toward the start. I couldn't actually see if those in shoes should be in one place and skiers in another so I hopped over a snow wall that seemed manmade (but I can't figure out why it was there) and made my way to the starting line with mere seconds to spare. This was a large race. Nearly 3,500 brave souls, many with names that have umlauts, were ready to race.

As the sun slowly faded behind us, I think I heard someone say "Go!", all the skiers took off, and I followed.

Almost immediately I could tell that in my desire to make sure the snowshoes didn't fall off (a problem I had in my only previous experience) I had made them WAY too tight. I was doing my best to be as unobstrusive as possible to all the skiers around me, some who were doing the classic skiing and some doing the skate skiing you see in the Winter Olympics. I wondered how they chose which style to do while I nimbly ran around poles and skis and bodies. All I could think about was the end scene of "Better Off Dead" where Roy skied across Lane's bindings and he had to go down K-12 on one foot.  I didn't want to be a Roy here. Always be Lane.

I finally got over out of the way of most everyone else when I saw some other runners to the left. I stopped and quickly tried to undo the release mechanism to loosen the shoe. I think I did but by now I was mad I was losing time and just started running again.

The first mile was trying to find the right technique to run while my left shoe would occasionally clip my right ankle. I can say, in a word, yowch. Soon the ankle was numb enough from the cold that I couldn't feel if I had gotten better at running or just didn't feel the clips any more.

To the 7k mark

After passing the "3k Down, 7 K to go!" sign I felt like I had finally hit a rhythm. The sun had now set

behind us and we were following these amazing ice markers to stay on course. Like enormous fancy ice cubes, with the center hollowed out and some sort of kerosene candle (I think) in the middle, these markers were every ten yards or so for the entirety of the course. I can't tell you how cool this was.

Here I can also say how absolutely fortunate we were to have a tailwind. As the relatively balmy 11 degrees felt fine enough when you were exercising, it would have not been fun to feel the arctic blast in our face if the wind was going the other direction.  Every kilometer had some sort of bathroom or drink accompanied by a bonfire and those fires showed the snow whipping across the ice on front of us. Just gorgeous.

I was passing tons of skiers and a stray runner here and there and only a few skiers passed me. I felt like I figured out the shoes but when I tried to run harder, the tight bindings hurt my feet even more. Earlier this year I took one of the longest breaks I have ever taken in running to try to fix a wonky and sore achilles and heel and after two weeks of no running at all (but swimming and lifting weights) it has felt like I had never run a day in my life as I ease back in. My achilles feels much better but I am still quite wary of any little niggle. On the ice in the snow with these shoes on, I was even more worried.

But on I trekked.

I had spoken to some very nice people before the race as we warmed ourselves in the tent who had done this race numerous times. They told me about an ice dragon at the 8K mark which breathed fire. I figured she was likely frozen in the head from the cold and nodded politely. But soon after the 7K mark, up ahead, I would see blasts of flame explode in the darkness. As I got closer I began to run with vigor as I knew I had just over a mile to go after I passed the dragon. 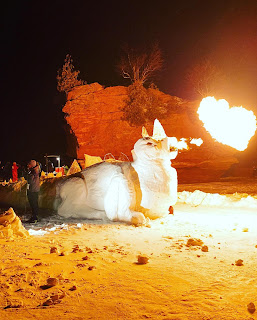 What a sight to see it was! Absolutely fantastic.

I began to knuckle down here with this final mile to go as I felt like I was doing far better than expected.  I also didn't want to lose a place to someone in another wave because I let up at the end and they knuckled me by a few seconds. So I gave it all I had, within reason from the pain of the shoes, and bit the bullet. I was now running as fast as some of the skiers and passing some at the end. The finish line lights once again illuminated the snow before us and the wind billowed across pregnant with snowflakes in a beautiful display.

My final few steps got me up and over the only hill on the course (I loved the elevation profile (flat) presented at the race!) and I finished in 51:53. I immediately took of my shoes and saw ice had caked on my now bare ankles, as my tights had rolled up. Swollen and already bruising from the shots they had taken from my shoe, my left ankle was sore. I grabbed my jacket, hoofed it to my car and immediately began making the 3.5 hour drive home. If I was going to be in pain I could at least be in pain in my own bed. Well, my own inflatable air mattress. (Seriously, movers, you have two days until you get your own post.)

I had seen what was reported to be the overall winner's finisher's time which I assumed had to be some sort of misprint. But upon further investigation when I got home I saw that the winner, in my freaking age group, nonetheless, was not only the SIX -time national champion in Snowshoe racing but did a snowshoe 10k this evening in a time I haven't even run a road race 10k! 35:54! However, When I saw that I had finished 6th overall out of 375 finishers, I can tell you I was indeed elated.  (My friend who told me about this race? First overall woman and her boyfriend was second overall man. Fast kids!)

For over two years I made the small sacrifice of almost never racing, never traveling, wearing a mask, and doing all the things which would not only keep me and my loved ones safe but also to help stop the spread of this pandemic. (How ridiculously self-centered and narcissistic are you to see how easily we could have ended ALL of this a year ago and just refused to do so?)  But all this time, I didn't realize HOW badly I was missing racing. This race brought out a fire in me.  It might still take some time to get into shape again, and I am definitely not any younger than I was not only pre-pandemic but pre-moving to the blast furnace of Austin which robbed me of five years of racing and training, but the fire and desire are there like they haven't been in a long time.

I am looking forward to stoking those flames!