Running Every Single Street in Your Hometown

When it comes to the world of running, I remember saying in an article 15 years ago that there’s hardly anything new under the sun. Without a doubt, and obviously, nothing has gotten more fresh.  Sure, we can all try to find something that someone hasn’t done already but that is a rather fruitless search and really what is the point? What really only matters is if it is new to you specifically. Like 52 marathons in 52 weekends, for example.

That said, in the past few years in the running world during the pandemic when races were canceled a few things have popped up was finding ways to challenge one selves to scratch the itch of missing races. One way that became quite popular was running the "fastest known time" for something. Basically, finding a course of some length and note, seeing if anyone else has a documented time for it, and if not, documenting you r own while trying to run the fastest anyone has ever done. This, is obviously limited to the fleet of feet or at least the intrepid who found a trail no one else had run yet.

Another, way, more egalitarian, was made popular by ultrarunner Ricky Gates, and that was to run every single street in a certain area. Rickey ran every street in San Francisco in just 46 days in 2018 and when people couldn't race, many turned to this newish endeavor.

When I lived in Salt Lake City for four years I was traveling quite frequently. When I wasn’t being a creature of habit I ran the vast majority of my miles around 1 1/2 mile loop in a park across the street from my home.  I know many other people enjoy exploring the trails and seeing that which is around them, and it’s not that I don’t, but I spend so much time when I am running thinking about other things or sometimes nothing at all, that the familiarity of that loop was a salve to my thoughts. That said, when I was moving to Portland Oregon I realized how few of the city streets right near my house I had never  stepped foot on. So in a small undocumented project, as I didn’t have any sort of GPS watch at the time, I simply decided to run the grid like streets of Salt Lake City in the few square miles around my home.

Suffice it to say that I was pleased that I was able to do this in a small capacity before leaving Salt Lake. In Portland I explored a little bit more than I did in SLC but I had pretty much a four standard runs I ran all the time. When I moved to Austin I more or less stuck to one trail near my home with a deviation here and there.  The trail was paved,  marked with mile markers, and almost unimpeded by any type of vehicle traffic. It was hard to pass this up!

When I moved to Minneapolis in February it only took me about a month to realize that I didn’t want to repeat what I wouldn’t necessarily call a mistake in Austin, but the lack of exploration.  Plus, I really wanted to really learn my city. That was when I decided that I was going to run every single street. 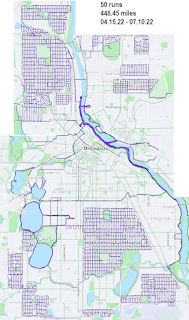 That project is moving along rather smashingly even if the world has opened up somewhat again and my traveling has interrupted it quite a bit. I recently found myself in my hometown giving some aid to my mother who had a recent medical procedure. As I had about two or three similar runs that I ran all the time here I kind of fell into the same pattern.  After a few days however, I thought, it might be pretty darn easy to knock out every single street in this 5000 person two-square mile town.

The reality was that it actually ended up being a little bit more difficult than I thought simply because of two major factors: one, there are a lot of long roads that lead out of the city that dead end and require backtracking. Two, I live in a valley and everywhere out of the city is up a big damn hill.  Fortunately, I had some of the streets already marked previously before starting this project so I knew that would help cut down the time needed to complete it. But six days and approximately 50 miles of running later I can say that I have completed the first ever city where I have run every single street. The fact that it was my hometown was a  nice little bonus.

What did I learn? Well, I realize that without a doubt they were not only streets that I had never been on by foot, bike, or car but there were streets that I didn’t even know existed. I also learned some streets that were marked on one map were not marked on the other and some that no longer existed were still marked! There are probably a few places where a city street is now private property or have no trespassing. Maybe someday I’ll be able to find a way to knock those off.  Imagine me running through a factory shouting "Sorry, guys. This says it is Mechanic Street!" 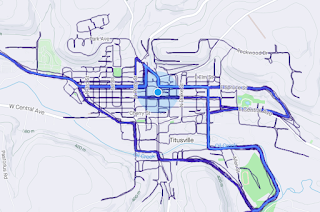 I was disappointed, but not surprised at the number of Trump signs that I saw but I try not to let that color in my thoughts of the populace on the whole.  All told, it was surprising how many memories came flooding back of places and events and things that I hadn’t thought of in 30 years that likely never would have come to me if I had been simply driving down the street. I will not wax poetic or extol the virtues of traveling by foot as if you are reading this  I would be preaching to the choir,. However, I will definitely say something I learned long before I made any sort of name for myself in the running world, and that the absolute best way to see anything is by foot.