I had the pleasure to make the acquaintance of Dave McGillivray last year. A quick way to identify Dave would be to call him the race director of the Boston Marathon. Automatically, even non-runners would be able to place him with this description. However, to label Dave as “only” the Boston marathon director (as awesome as a job as that is) would be to diminish not only the man but also his litany of accomplishments. From running across the country when he was 23 years old, to swimming 24 hours straight to raising hundreds of thousands of dollars for various charities (and I am quite sure I am cutting the number of dollars he has raised short there), McGillivray has packed more into his short life (he is only 54) than the combination of many people.

One thing I am loath to do is call someone a “friend” who is not one. Too often people do this when they really have no reason to do so. Often it is with celebrities or well-known people and the obvious reason is the added cache it lends to some to be “in” with the in-crowd. Dave McGillivray is not my friend as of yet. I am not that lucky. I can only hope that will be remedied as time goes by. 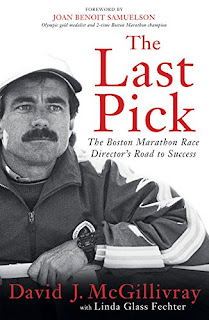 That said, I admire Dave enough and have corresponded with him enough to call him a good acquaintance. As such, it was embarrassing to me to not have read his autobiography: The Last Pick. (This may be an advance guilt trip I am laying on all of you in order to make sure you buy and read my book when it comes out in a few months). I started it when I left Washington D.C. on an airplane. With a connection in Charlotte and a landing in San Diego, I can honestly say I finished the book before I landed. Actually, somewhere over the Rockies is where I turned its final pages (which included his mother’s recipe for chocolate chip cookies.) That should tell you how good of a read it is.

Starting early in Dave’s life, the book details how being vertically challenged (Dave only registers 64 inches of height) shaped not only his childhood but also most of his life since then. When you finish reading the book, and see the massive, mouth-opening list of accomplishments Dave has garnered in his short time on Earth, you can plainly see height has got jack to do with what you can accomplish.

But far more than a tome of “Look what I’ve done!” the book serves as a guidebook to how one person can make a difference and have fun on the way. Recently, a few friends have praised me for refusing to settle for a life I did not want and for grabbing life by the horns and willing myself into the exact vocation I wanted. Well, if I had read Dave’s book prior to a few months ago, one could have say I plagiarized his gumption and used it as my own.

McGillivray recounts many of his running and fundraising efforts with such effortless panache that you come to think of weeks on end of running 40 miles a day as commonplace. One of my favorite quotes is how he mentions he does not recall a single one of his friends being overweight growing up. I can only wish I could say the same thing. And while he barely touches the surface of his battle against childhood obesity, I will bring it more to the forefront here.

Team DMSE instituted TREK in 2004. I was asked to participate in its successor in 2006 when I acted as a guide for runners as they made their way through Maryland, on past the Capitol Building and into the Old Dominion State (read more here). With an invite to actually be a member of TREK this year, I can only hope the cards fall correctly in order for me to make a difference.

Dave sounds like a pretty amazing guy. Maybe you should open a lending library for all of these great books you are reading! :)

Wow, I didn't even know that Dave had a book out, and I am sure it was a good read. You forgot to mention that he also runs the Boston Marathon every year starting hours after the first runners have left, and his "duties" are over - but finish it he does.

I didn't forget. I just said that listing all he does would take forever!

Dave's still taller than I am.