Back in 2003 I did my first and only 12 Hour Run at the Presque Isle Endurance Classic. Running 84 miles in 12 hours, I could not have possibly fathomed where I would be in running today. At the time, I wasn't even particularly impressed with the distance I ran. I knew I broke the course record but figured it was something that was easily broken. Heck, it was only in Erie, PA.

Since then I have learned that I must have had what runners call a "perfect day". I remember while running the race how easily everything felt. At the time I had a personal best in the marathon of 3:29 minutes, set barely a month before at the Erie Marathon at Presque Isle. While that day had been a 43 minute improvement over my first marathon in Harrisburg, I was far from pleased. (Probably because of my ridiculous running attire.) 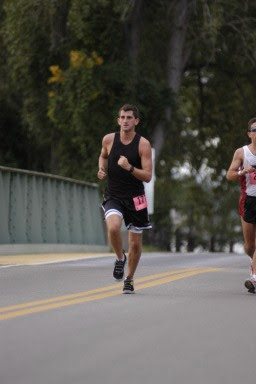 So when I went through the first 26 miles of the 12 hour race in about 3:33 I naively thought that that was good pace. I was 4 minutes lower than my marathon so that was good, right? I can only shake my head and laugh thinking about how wrong that was. Yet, the day progressed and I kept running loops. Over and over again. 84 of those loops later and I finally stopped. with some 13 minutes to spare. Below is a map with Erie in the center. the circle shows how far 84 miles is in every direction. In theory, running a straight line, I could have made it to Cleveland, Buffalo, or good old Butler, PA. 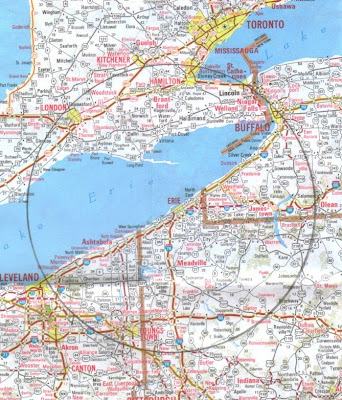 As the years passed, I said I would never run a 12 Hour race again. Or at least until someone broke my 84 mile record at Erie. Fortunately for me, the following shows the winner each of the past 5 years:

So I did not have to do it again. But then fate intervened. When my entry form for the San Francisco One Day Race did not, for whatever reason, make it to the Race Director in time for the cutoff, I was left in a bind. With accommodations already worked out, a plane ticket already purchased, and a weekend already planned, I only have one viable option: Run the 12 Hour race instead.

And there you have it! Completely out of the blue, I find myself doing a race I thought I might never do it again. And while I am a far better runner now than I was in 2003, unlike then, I did not have a marathon a week later to run. So I have more modest goals in mind for this race.

If I can get 70 miles, I will be a happy camper. If I do more than that, or am in competition for the win, then that is just gravy on the potatoes. (There will be some stiff competition at this race so we will just have to see what the day has in store).

A few nice features about this race I would like to mention:

*a live Webcast, which can be found HERE. Bear in mind the race starts at 9 AM PACIFIC time on Saturday morning, so all my wonderful friends on the East Coast will have to wait until lunch time to take a peak.

* in addition, emails can be sent via this form HERE. The Race Directors will print them out and hand them to the runners for inspiration during the day. I'd be lying if I said I would mind having a few coming to me throughout the day!

It will be pretty easy to spot me during the run. Besides looking like the guy at the top of this blog, I will be sporting my ROAD ID jersey. You have all heard me speak about how imperative it is to safely run with identification, so it is with great pleasure that I will wear the ROAD ID jersey on race day. 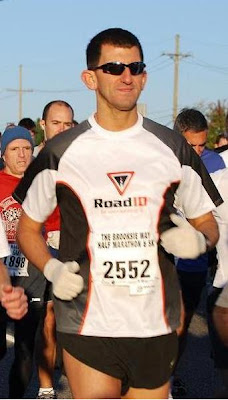 On top of all of that, I will be handing out free ROAD ID gift certificates to runners of the races, courtesy of ROAD ID itself. Without a doubt, most ultra runners stray off the beaten path more often than casual runners so they are extremely susceptible to the uncertainty of trail running and other unforeseen events which befall runners. That is why I am helping give these ROAD ID certificates to the runners in this race, in hopes that they will make sure they are all safely protected. If not for themselves, they should think about their loved ones back at home who are always happy to see them return.

Having said all of that, if you are in the area of Crissy Field on Saturday in San Francisco, come say hi. I will be running loops around a 1.067 mile track and would love to see you out there! Good luck to all the runners and to all my friends at various marathons this weekend!
Posted by Dane at 6:59 PM

I hope you have a great race, Dane. Maybe you can run some loops with Nattu! :) It's great of Road ID to offer some certificates to the runners! Have a great weekend, my friend! :)

Hope it's going well, Dane! And despite what I said on Runners' Lounge about Dean, you ARE an inspiration :)