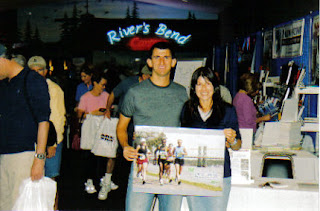 While this was not the first time I had been asked to give my story to a audience, it may very well have been my biggest audience to that date.  I felt comfortable in the role of promoter of what I was doing and why I was doing it and chances are the groundwork for the work I do now can be traced back to that day.

When I ran into Joe, one of the nicest men you will meet, at the Illinois Marathon last April we began to talking.  I ended up signing books out of his booth all day long as we reminisced on that day nearly three years ago. 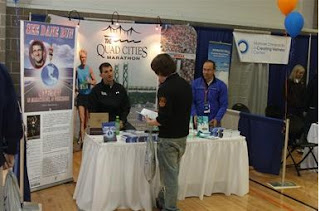 Our conversation led to the 11th running of the Quad Cities Marathon that fall but I was unfortunately otherwise engaged.  Staying in touch was something Joe and I had no problem doing and soon enough we decided I would be back again for 2010 - this time filling the role I had once seen Patti do: featured speaker.

So it is with great pleasure to say that I will once again be running through the many and varied streets of the Quad Cities (which technically are five in total) this September 26th. When a race director goes as far as to use his own vehicle to block a train which may interrupt his race (seriously) you know this is a race where the people care about putting on a good marathon.  I take that same attitude to heart and plan on doing everything in my power to give those in attendance a one of a kind speech. 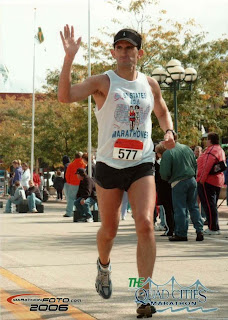 I hope you will take the time to venture to the Quad Cities Marathon this fall to experience a truly wonderful race.  A race which has seen its registration go up for 5 consecutive years (and counting) shows you that I am not the only one who feels this way.

Do yourself a favor and don't miss this race!
Posted by Dane at 3:29 AM

As someone who has ran this race the last two years, I just wanted to welcome you from a runner's perspective. I agree it is a fantastic race, and I love Joe welcomes and shakes every finisher's hand. Hopefully I will see you there this year!