If anything comes close to comparison to what I will be undertaking in April, it will be my 84 mile run in 12 hours at the Presque Isle Endurance challenge.  Then again, that is only about 40% of the total miles of the relay. But it still makes for a cool picture to see where 84 miles in a straight line will take one from the strating point! 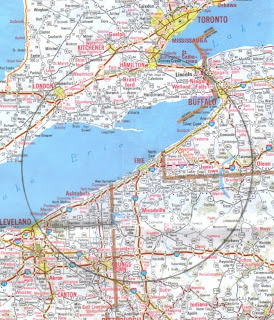 The thing which worries me most is the weather or the unpredictability of it.  The AOR was run last year on what is one of the best times of the year to run such a race - late Spring in south central Pennsylvania onto DC.  Of course, this weekend was the same weekend of my infamous meltdown at the Kentucky Derby marathon. 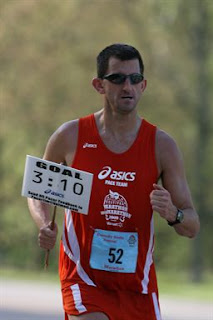 If the repeat were to happen (highly unlikely) I know I would be in some trouble.  But these are the things one must prepare for - the unlikely or unexpected (although, if you prepare for the unexpected is it unexpected?)  Either way,  I am starting to get excited.  With my Rocky Raccoon 50 mile race in two weeks and my attempt at completing my first full 100 miles (in very fast fashion) on the horizon in March, I have the ability to test myself with the higher mileage races.

And that is what this challenge is about: testing the unknown.  if i knew I could do it, the challenge would be less daunting.  When people ask me if I am going to do the 52 Marathons in 52 weekends again, I first try to shake the dumbfounded look off my face and then tell them there is no reason.  Half of the point of me doing it in the first place was I had no idea if it were possible to run that many marathon consecutively at the speed I ran them.  Now that I know, it is time for bigger challenges. Like 204 miles all at once.

I finished my first Ultra (50K) this weekend. I can’t imagine 50 miles; 204 is inconceivable to me. Absolutely unimaginable. You sure know how to push yourself and set really tough goals! If you post your training miles, I would be interested in reading what it takes leading up to running over 200 miles in one event.