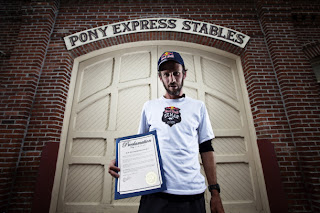 When contemplating one's own long distance runs crossing many states, it is always great to see you are far from alone.  On Tuesday, Karl Meltzer, from Sandy UT (just down the road from me in Salt Lake), finished running the entire 2,064 mile Pony Express National Historic Trail from Sacramento, CA to St. Joseph, MO.

Averaging over 50 miles a day, Karl topped 11,000 feet on his journey burning approximately 247,000 calories as he became the first person ever to run the entire length of this trail.  And to ca the entire journey off, he delivered a letter from the mayor of Sacramento to the deputy Mayor of St. Joseph.  I am personally a little disappointed the mayor couldn't make it out for Karl.  Maybe the fat that Karl covered over 100 miles in the last 24 hours caught the mayor off-guard.  Wow.

I have never had the pleasure of meeting Karl but we have exchanged a few emails in an attempt to find a time when we were both actually in the places we call home to go for a run.  If I didn't already know it, I definitely do now that I haven't the foggiest idea if I could keep up with him even on an easy day.  Karl has created one of the hardest 50 kilometer races in the country in the with his Speedgoat 50k.  Even the top competitors usually take 2 hours longer to complete this course than they do a normal 50k.  Obviously, Karl likes challenges.

Asking why he did this is a rather pointless question, in my opinion.  In fact, if I had a chance to ask 10 questions of Karl with regard to this excursion, that would be question 17 at best. He did it, I am sure, because he wanted to. He also had a steady diet of chicken and burgers along the way.  Got to love that a man pushing himself to the limit has no problem fueling himself with, amongst other things, beef.  If it is good enough for Karl, it should be good enough for you as well.

Regardless, a huge kudos goes to Karl for redefining possible.  One of these days I do hope we get to go on that run.  I am going to try and keep it under 20 miles, if at all possible.
Posted by Dane at 11:27 PM

What an amazing accomplishment! Thanks for sharing :)