I have spent a great deal of time running on the side of the bay that most people think of when you mention the Bay Area of California. From running every one of the races that the San Francisco Marathon has to offer to winning the 6 hour New year's ever race on December 31st just of last year.  When I heard last year that the people who put on the fantastic Baltimore Marathon were going to also put on an entire Running Festival across the country in Oakland, I was ecstatic.

Then I found out it was scheduled for the weekend of my Umstead 100 miler - an integral race in my step up to run 202 miles.  I could not cancel the 100 miler so I vowed to return to Oakland asap.  Well, that just so happens to be next weekend on March 27th when I take part in the Oakland Running Festival Half-marathon! 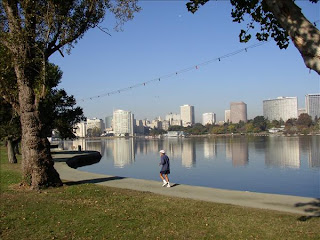 Starting right in front of Oakland City Hall, the race will traverse plenty of historic places in the area, including a trip around scenic and runner-friendly Lake Merritt.  After that I will just be trying to hang on for dear life as the runners in this race last year threw down some blistering times.  My PR would have only netted me third in my own age group!

I know some people I spoke to about this race were worried that it may be a little hilly.  To be honest, it does look to have an uphill climb for the last 1.5 miles.  however, as i have heard at least in some shape or form many times "Don't wish it were easier. Wish you were better."

I like the challenge of taking on a tough course against fast competition. I love the idea of running a race for the first time. The exhilaration of the unknown is tingling.  Over 3,000 runners in the half alone last year seemed to agree with me as they took on the inaugural event. They must have know, like I already was aware, that an event sponsored by Corrigan Sports Enterprises,is almost guaranteed to be top-notch. Having done two separate Charity Chasing runs at both the Frederick Marathon and Baltimore Marathon in 2007 and 2008 respectively (both events operated by CSE), I am definitely no stranger to the wonderful work they do.

As such, I cannot wait to be running one of their races again, this time in an completely new venue!  Hope to see you in Oakland!
Posted by Dane at 5:46 PM