Eating Healthy with Beef- A one Q and one A session

The good thing about having over 2600 "friends" on facebook is that you can experience lively debate.  The bad thing is that the comment section to respond to those questions is not the appropriate place to respond, usually. It is too tiny and limited in characters, especially when you have a lot to say.  In this particular instance, I mentioned in a status update that

"May not like being up this early but I do like talking to people about eating heathful foods such as protein rich lean-beef on morning news shows!"  This was in reference to my appearance on WCAX in Vermont about my upcoming 130th Marathon.

One response was as follows:

Dane: when you talk to the public & children about beef do you ever share with them a walk through of the life & slaughter of cows or is that still taboo?

[For an interesting look at such "slaughter" look at this article here (which the poser of the question predictably found to be "slanted". I say predictably as he is one who often likens horrific human tragedies to those in the production of meat in the cattle industry.]

In typical Dane-fashion (yes I am using the third person here) I wanted to simply say "Yes, if asked" because, well, I am blunt, direct and honest like that.  However, simply answering the question wouldnt really answer the true question (especially given I know the views the person who posed the question has and a simple answer would not really suffice.)  I thought about writing a response in return in private but then I realized that there is nothing I would say to him that I would hide from the other 2599 facebook friends.  So please read my response to him and realize it is the same I would give to anyone else. Also, to quote Principal Vernon from "The Breakfast Club."

"Don't mess with the bull, young man. You'll get the horns"

Yes, Erksien, I would happily do so.  But to answer in greater length:
1. The public and the children are not mutually exclusive.  Putting "the children" in there to try to prey on emotional sentimentalities is a pretty weak way to try and win sympathy from readers.

2. The vast majority of people with the appropriate amount of working chromosomes are aware that in order to eat meat, an animal must die. While I am not rich enough and do not have the time to ONLY eat meat I kill (ala Mark Zuckerberg's latest claim to do so - Google it, I don't feel like providing a link here) having been a hunter in the past, I thoroughly respect that animals are giving their lives so I can eat their meat.

3. Having grown up in NW PA, with ranchers and farmers and their "children" as my friends and neighbors, I fully comprehend every aspect of the circle of life when it comes to eating beef. I also know that there are fewer better treated animals than the cattle which eventually end up on my plate. Why?  Because if they cattle are not taken care of, their meat is poor.  If their meat is poor, then the cattle producer who sold them will not receive any more orders to sell his cattle.  If that happens, the cattle producer, who already is more or less doing what s/he does for the love of the land and the animal (no cattle producer is getting rich - please do the research here again on how little money is made from each head of cattle and then you will realize how thin their profit margins are and how much incentive they have to provide healthful and nutritious meat to consumers) goes broke. As such, there is zero incentive for meat to be anything less than superb. 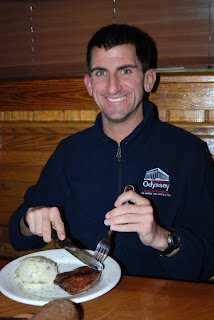 4. There are very few taboo subjects with me.  If you have spent any time on my Facebook page you see I do not back down from any discussion.  Of course, I want any discussion to stick the parameters of what is being discussed and will happily snap in half any attempts to derail it with a straw man argument.  So no, discussing this is not taboo. In fact, I invite open and honest discussion about the things I stand up for.

5. I see you ignored the health benefits of eating beef in your critiquing and slightly (actually more than slightly) condescending question here because you realize:

a. Science is behind me in how beef is a nutritious, low-calorie, high in protein, zinc and iron way to properly fuel your body to be a normal person or one who takes on physical challenges.

b. Exact instances are behind me in that I have fueled myself from doing 52 Marathons in 52 Weekends to 202 miles in 50 hours to taking on triathlons all while constantly traveling, speaking and pushing myself to the limit.

So if anything, you showed good judgment in leaving that part out. Kudos!

I hope I answered your question adequately. I apologize for the delay in responding but I was out in Vermont running very happily, without injury, in shoes, while eating a healthful balanced diet that contains beef.
UPDATE:

After this article was posted, I actually went to one of the biggest feedlots in the world in Idaho.  I wrote about my experience there. Even those this initial article was posted over two years ago, and the feedlot visit was the beginning of last year, nothing has changed in any of the view points I espoused.  I still eat lean beef, I still feel it is one of the reason why I can do the feats I do and I still think that by and large the cattle are treated far better than most people treat their friends and pets.