What in the heck is a Pikermi?  Well, allow me to quote from Team Pikermi’s website:
“A Pikermi is a running race of a distance of 13.1 miles, formerly known as a half marathon. Basically, the term Pikermi is used because of the route of the original "marathon" in Greece, which was a route from the town of Marathon to Athens - approximately 26.2 miles (the distance of a marathon). The town of Pikermi is about the mid-point between Marathon and Athens, therefore being a distance of about 13.1 miles.”
The obvious question is “Do we really need to pick nits here and rename this race distance?” The answer is yes.  Never has a race distance received so much disrespect.  A 5k is not half-10k and a 50 miler is not half-100miler.  Why should we demean the accomplishment of running a race of 13.1 miles by describing it as "only half" of something else? We shouldn’t.  And I am going to do my best to try to change that perception. 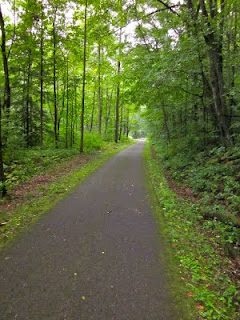 One way I have had the opportunity to help shape public opinion (other than this column) is with the races I developed for the Drake Well Marathon weekend. For those who do not know, the Drake Well Marathon and all its races are held in August in my hometown of Titusville, PA.  Originally created to assist me in running a certified marathon every single weekend n 2006, the marathon has expanded to include other races and will be having its 4th annual race here in 2011. The name comes from the first working oil well in history located just about one mile from the house I grew up in. And from here onward, the 13.1 race will no longer be called the Drake Well Half-Marathon but instead will be known as the Drake Well Pikermi. Ta-da!
With all but about a mile of the entire Pikermi being run alongside a flowing creek underneath a canopy of trees through the heart of the Oil Creek State Park, the race is quite idyllic.  Even though the entire course has barely 100 feet of elevation change, it is considered to be a toughie simply because it feels like you are running uphill both ways.  Why am I telling you this seemingly negative piece of information about our course?  Well, because we want no whiners at the Drake Well Pikermi. If it were easy, everyone would do it.
With the Drake Well Marathon and an all-new accompanying 5k, there are races for everyone, including being the first race to official call its 13.1 miles a Pikermi.  Join us in starting a tradition by refusing to allow your 13.1 miles be called “just” anything but what it is- a wonderful race.  There is no better way to start that tradition that August 21st, 2011. Registration for all races can be done HERE.
Got Oil?
Posted by Dane at 11:02 AM

The Pikermi is the greatest invention in running since the waffle iron. I can't wait to run my first Pikermi when it comes to my town, fantastic!