I first had the pleasure of meeting Phil McCarthy at the UltraCentric race in 2007 which was doubling as the US National Championship 24 Hour race.  I had a pretty awful day and while I only spoke to Phil briefly he offered me some wonderful words of encouragement and advice.

Two years later at the US National Championship 50k race, I had a much better day and this time got to speak with Phil more, mainly because I wasn't sulking away to a hotel to lick my wounds.  Finishing 10th overall, my 3:37 time allowed me to lead Phil through the first quarter lap by two seconds- and then he resoundingly whooped me the rest of the way (his time of 3:25 was probably a time he wasn't even all that happy with!) 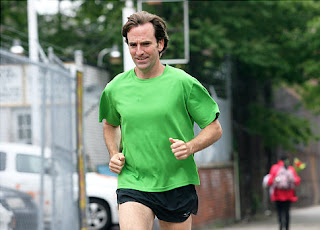 When a few weeks ago he set a new 48 Hour American Record by running astonishing 257 miles in 48 hours (at the Sussex County Three Days at the Fair meet,  obliterating the event's previous record, set by John Geesler of upstate New York, who ran 248 miles in 2003.) I had to sit down with him and talk.  The following is our interview.

DR: Were you an athlete growing up?
PM: I was definitely not an athlete growing up - I was a short, skinny little weakling growing up in football country (Norfolk, Nebraska).  My thing was getting straight A's and playing piano.  By my junior year in high school, though I did get good in track, being a sprinter - 100M, 200M, 4x100 relay.

DR: Did you run?
PM:  I did run, and always enjoyed it.  Even as a young kid I remember being proud of running all the way home from a friend's house a few blocks away or home from school.

DR: Did you run competitively in college?
PM: I didn't do any organized running or races in college, just occasional running on my own, no more than three miles or so.

DR: What’s your favorite running distance?
PM: I don't know if I have one favorite distance.  If I had to chose one, I might actually say the half marathon.  It's a lot of fun, you can really test your speed, and still requires some endurance.  I've probably been most successful at 24 hour races, and now 48, and I do love running them generally, but I've had so many down moments in 24's that it can cause real anguish. 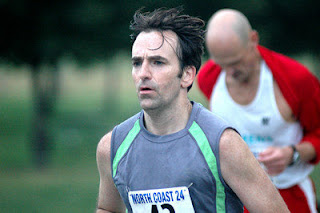 DR: What do you attribute your ability to run long distances so well to?
PM: I really don't know why I can run long distances well, I suppose genetics has a lot to do with it.  But even besides just long distances, fixed-time races are another story, and I seem to have the mental makeup to do well in those, possibly because I'm generally an introspective person, which I think helps me focus for these kind of races.  Also, there are quite a few fixed-time races put on here in the New York area, 6-hour, 12-hour for example, and other races run on short loop courses, so I get lots of practice running in circles.

DR: In your most recent record broken, at what point did you think it was going to fall?
PM: I was feeling pretty good and confident from the beginning of the race, but I also did at Across the Years, and there I ran into trouble at night and then halfway through.  So here when I got through the first night in good shape and on track, and the brace was working for my achilles after 20 hours or so, by the 24 or 25 hour point, I was feeling very confident about breaking the record.  But things can still happen, especially in the second night, and when it started raining (after about 41 hours, or 2 am) I was worried that it would throw me off, but I was still able to keep up the pace.  Of course, things can always still happen, but after 45 hours, and the sun came up the last time, I knew I had it.

DR: What are some of your upcoming goals/races?
PM: . My upcoming races are the Back on My Feet 24 hour race in Philadelphia in July, the national championships in Cleveland in September, a couple others I'm thinking about.  I want to try to re-qualify for the US 24-hour team and hopefully have a really good race at the world championships.  My 24 hour PR was back in 2007, so I definitely want to get a new PR.

Phil is the man!

Thanks for sharing Dane!