I have run 202 miles without stopping.  However, I have never successfully completed a 100 mile race.

Two attempts at the 100 mile distance have left me short.  In 2007, I attempted the Old Dominion 100 miler in Virginia. Ridiculous heat and humidity had me slogging along in second place until mile 75. Here I sat and watched at the aid station as two people came in looking like spring chickens (I had no idea how in the 90 degree heat and 100% humidity).  One left before me and the other after me.  In the next twelve miles as my energy ebbed and finally was completely sucked out me I had a decision to make.  I hit the 87 mile aid station and while the remaining 13 miles were on road I threw in the towel.

I could have easily walked those 13 miles and have been well under the time needed to get a belt buckle for the event. Yet the exhaustion from the day and the fact I was going to China in twelve days to run a marathon as the guest of a shoe company named Li Ning made me decide that I needed to live to run another day.  Did it sting? Absolutely.  But this day I know I made the right decision. Ironically, the run in China was marked by food poisoning but one cannot plan for those type of things and I had a blast nonetheless.
When my life changed in late 2007, I moved across the country and soon began planning for my solo running of the American Odyssey Relay. I did not really know how one would go about running 202 miles straight but I figured a 50 mile race and a 100 mile race would be one good way. I signed up for the Rocky Raccoon 50 miler but got a horrible flu just a few days before the race.  I still went to the race thinking I could power through it but two loops went by and I was done.  I had only my second DNF ever. I went back to my hotel room and determined to find a 50 miler next week, signed up for the Ironhorse 50 in Tallahassee. One could say I recovered well as I ran, won and set the course record.  That was some sweet redemption.

The only problem with the win at Ironhorse was the toll it left on my legs. My friend, Tony Portera, ran Ironhorse this year and even though they make it easier by adding some paved sections of the course, a vast majority of what runners traversed was cover in "very small rocks."  We all found it quite funny that this course was classified by "easy" by those who not only did not run but had never even seen the course.  Well, those rocks left me with some severe issues in my calf muscle.  Over the next month I was schedule to run 4 half marathons before attempting the Umstead 100 mile race. I ran the halfs each weekend and not much more. I simply couldn't do any more running than that.  When I got to Umstead I told myself this was a long training run, not to be attempting any redemption for the 2007 Old Dominion DNF and run with my head.

Some 30 miles into the race I knew continuing on would be folly. My leg was killing me and in less than a month I had to take on the biggest challenge of my life.  I wisely made the decision to stop at the 50 mile portion of the course and call it a day.  Technically not a DNF as runners had the option to drop to the 50 mile race the decision still left me a little unsettled. The story has a happy ending as I went on to run the 202 miles and did what many never thought possible. 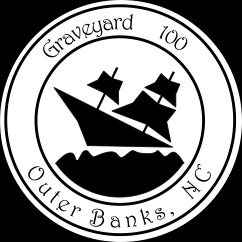 Which leads me to this Saturday. When I came up with the idea to run 350 miles up the Oregon Coast, I knew I needed something else to keep me focused not only on the training necessary to complete this run but also to take my mind off of it at the same time. The idea to use a 100 miler again as a training run came up and I found one that I felt both gave me ample time to train for and also enough time to recover from in order to have it fit all my needs.

So this Saturday I will be in the Outer Banks in North Carolina taking on the inaugural Graveyard 100. It looks like it will be a race right in my wheelhouse.  Cool temperatures, relatively low humidity and 100 miles on mostly flat road.  Granted using the exact same muscles for 100 miles can be exhausting but the nature of the course, with next-to-no-thinking involved, allowing runners to zone out, is just what I like.

Now whether the weather fully cooperate, the course actually be what I want and what will occur in 100 miles of running are all questions which can only be answered on Saturday. Yet, I like my odds in this race and am eagerly looking forward to toeing the line. I hopefully will be seeing some friends I have not seen in quite sometime as well as some runners I have talked with for years and have never met.  I will also have one of my very best friends along as my crew which will make the race so much more sweet.

Now I just have to survive the taper madness for a few more days.
Posted by Dane at 11:47 AM

Hoping you have a good, strong race Dane!

Wishing you the best! I was researching this race the other day. Looking forward to hear your awesome finisher's report!

COMPLETE confidence in you this weekend. Looking forward to hearing about how great you did!! :)

Good luck with the run! Can't wait to hear how it goes!!

Hope you achieved your goal :-)