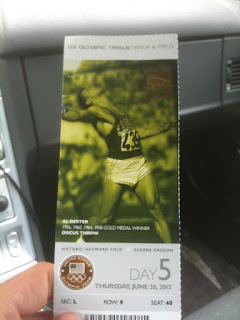 Back in 2008, with the Olympic Trials in relatively nearby Eugene (I lived in Salt Lake City) I so wanted to make the trip. Unfortunately, it never happened. With the trials in 2012 being in the no-need-to-use-the-word "relatively Eugene again (I moved to Portland a week ago) i would not make the same mistake again. The only question was, needing to move myself into my apartment, and having at least a low-enough grade of OCD to allow me to escape for one day to watch the trials before returning to unpack, which day to pick? I think I, like Indiana Jones, chose wisely.

Two major events will stand out from this day of the Trials that I watched yesterday. The Discus and the 5,000 meter final (both men's and women's).

I will start with the 5,000 meter men's final.  Galen Rupp won with an incredible 52-second last 400 meter (I mean, wow.) I have never understood the knock on Rupp, whom some seem to dislike.  Perhaps some have reason but I am guessing most just have a "feeling" and go off of fourth hand accounts. All I know if he is one heck of a competitor and it was amazing to watch him run. Breaking Steve Prefontaine's 40 year old meet record was surprising but what I found shocking was that even in doing so, his time was not the Olympic A qualifying standard.

As ESPN explains "There's this thing called the Olympic qualifying standard -- a minimum performance level that divides those who will compete in London from the rest of us. You can win an event at the trials, but if you haven't met the Olympic A standard for your event -- a 65-meter discus throw, say, or a 5,000-meter time of 15 minutes, 20 seconds -- your trials medal earns you a stool at your local sports bar during the Games." 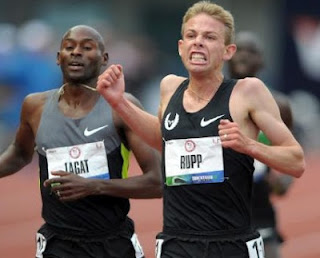 So Rupp's 13:22 broke the record but didn't even break the A standard at this meet (he has done so previously). I am not quite sure what this says about the trials other than it was obvious the runners decided to make it a tactical race for about 6 laps and then a race would break out.  That's exactly what happened, where Rupp got in front of Bernard Lagat, known for his finishing kick, and then, after falling behind Lagat, somehow surged ahead again to win. Rupp had lost to Lagat 12 previous times. Thirteen seemed lucky enough for Galen. Kudos to Rupp and the other two men, Lagat and Lomong who will be representing us at the Olympics.

Earlier in the meet, a track coach from an Ohio school siting behind me, mentioned he had never seen an entire stadium get that "up" for a discus thrower before.  There was a reason. Lance Brooks, who had led the trials from his very first throw, was missing that elusive "A" standard. Faulting on his first two throws at his final attempt to hit 65 meters, the crowd was buzzing. I was sitting in the stands almost parallel to the 60 meter line for the discus.  Let me break here for a second.

If you have never watched a track meet at Hayward Field, and are a track fan, you are doing yourself a great disservice. THIS is a crowd. Chanting and rhythmic clapping, knowledgeable fans, and general excitement for all is palpable. When a pole vaulter ended up making the final three to move on, a shriek went up from one woman in the crowd.  It ends up it was his mother.  Instantly the crowd turned from the field and began applauding the woman in the stands. It was fantastic. Again, THIS is a crowd.

As such, sitting here, at the only discernible line for the discus throw, knowing Brooks needed to throw 5 meters past that line, the tension was thicker than the fog and rain that have plagued these trials.  Lance uncorked a throw that was obviously going to clear that 60 meter mark but the question was by how far.  When, it landed, a half-cheer half- "crap, is that long enough?!" gasp erupted from the crowd. I have always found it amazing how the human eye can make measurements and ascertain minutia.  One man, sitting right next to me only for this event, jumped in the air. how he was connected to Brooks is unknown but he was definitely rooting for him. And he seemed to know something the rest of us did not. 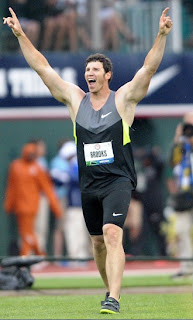 As the judges ran out to mark the divot and jam some "I claim this land for Spain!" type marker in it, the crowd was rapt with attention. I will admit to not having watch many throwing events recently but I did know they seemed to no longer use tape measures for measurements.  Instead, this marker seems to digitally read the distance from the throw and immediately throw it up on the screen.  The announcer said. "It will take a 65 for Brooks to advance to...65.15! Brooks goes to London!" The crowd lost its mind.

But still to come, sandwiched between these two events, was the women's 5,000 meter final. An entire article could be written about this event but I will try to keep it confined to the last 1200 meters. This is where, a relatively slow pace was taken over by Julia Lucas, who separated herself from the pack. Because Lucas had run 15:08 previously, all she needed was a top-three finish, or to be the highest finisher who had met the standard. In other words, she could finish fourth if one of the three medalists, didn't go faster than 15:20 -the "A" standard. There it is again.

However, what can only be seen with 20-20 hindsight is how Lucas pushing the pace was an epic miscalculation. She opened up a huge lead, and everyone in the crowd couldn't believe it.  Why make such a decisive move with 3 laps to go? Could she hold it?  It got up to 20 meters at one point and we all though that she would at least pull off a third if nothing else.  On the last lap the lead had shortened considerably. Again, sitting in my awesome seats, I could see this all unfold, right in front of me is where both Molly Huddle and Julie Culley passed Lucas. No problem for Lucas. With only 200 meters to go and one one else in sight, and no one looking to go under 15:20, she was safe.  Then coming into the homestretch, Lucas' legs all but shut down. Lucas shut down.

In the final 10 meters, Lucas still had a lead on the hard-charging Conley and Abby D'Agostino. Everyone could see that something masterfully awful and wonderful was going to happen. Either Lucas was going to hold on or Conley was going to pass her. Then, a group realization hit that there was a chance that not only would Conley pass her, but she would also get the "A" standard.  this would mean Lucas would not make it as the fourth person.  It is hard to explain how an entire group can collectively come to this understanding, simultaneously, within milliseconds but that is what happened.

After Julie Culley outkicked Molly Huddle, the current American record holder in this event, for a 1-2 finish, all eyes were on the Shakespearean tragedy unfolding.  As Lucas looked like she was running into a 30 mph headwind that appeared to be a tailwind for Conley, it became obvious what was going to happen. on the other side of the track, a field away and separated by 100 yards of track, the fans could tell. 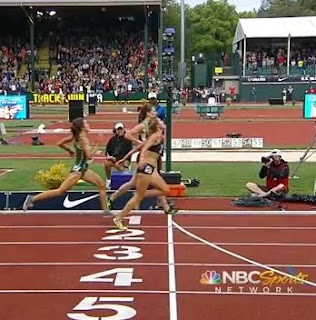 By pushing the pace so hard in the final meters, Lucas improved every runner's time. And Conley, whose previous best time was 18 seconds over the 15:20 standard, finished in 15:19.79. 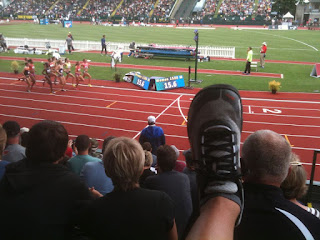 If it is possible to feel elated for the "victor" and horrible for the "vanquished", this is how the crowd felt at Hayward. However, as many pointed out, it was great that Conley did get that third place as she is the one who led the race for the first few laps.  Not content to run just a tactical race (as I said, he time wasn't even close to an "a" standard so she had to run fast) she pushed from the get-go.

Can I say I chose the right ay to go to the Trials for the first time ever. Unabashedly so. Thank you for putting on such a wonderful show, ladies and gentlemen.  Too bad we cannot get a cohesive yearly structure for you athletes to allow America to care more than once every 4 years.

Me, well, I just kicked my Altra Samsons back and watched a few events people will still be talking about 20 years from now.

It was thrilling to watch it unfold on tv, I can only imagine how fantastic it was to watch it live. Great recap Dane, one of my favorites by you.

Such an amazing day of events! It was nice meeting you as well. Anxious to pick up your books.

-Greg from Beaverton. Sat next to you that day at the trials.