My father passed away in January. (You can read the piece I wrote about him here.)  For brevity’s sake, my father, crippled in a hunting accident before I was born, never once went on a run with me. Seeing parents and their children running together at races will never not choke me up, and that was before my father passed. 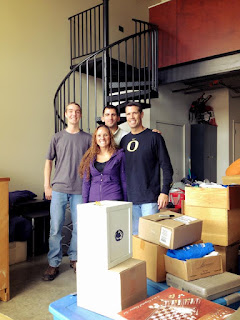 I just made a big life change and moved to Portland, OR.  The normal rigmarole of moving was compounded in its difficulty by having an injured shoulder. However, with the help of a few good friends, I was unloaded in just over an hour.  I’d like to think we set a new PR. But once the unloading was done, the unpacking began.  What a nightmare.

After a few, well, many, hours of unpacking, the dismal sky out my window turned into a beautiful day.  I decided I needed to go for a little shakeout run. Now where the heck was my watch? Obviously, I do not need a watch to do a run but given my body is not in the shape that it used to be, in order for me to know how far I was running (I can usually tell simply by feel) I thought a watch would be helpful.  But I  could not find either of my Timex running watches. What could I find, amongst the boxes and bags and sundry other packing paraphernalia? Well, somehow, I found my father’s old watch, which my mother had just given to my last week when I was home for a visit. 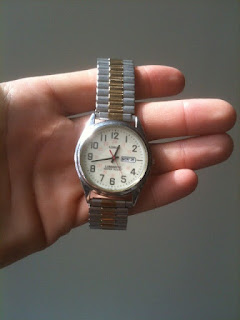 My father was never without this watch. It was no heirloom and it was nothing fancy.  But he always had it on. Getting it as a gift from my mother to hold onto was very special.  I could never wear it, unless I took about 10 links out of the band (Damn you, girly little wrists!) but I never intended to do so.  I simply wanted to have it. But here it was.

I decided I would take it with me.

Off I ran from the pace of my new beginning, up to Mt. Tabor’s lush wounded hills with the sun streaming through the filtered leaves. Even as my inactivity from the past month coupled with the rigors of moving, tore at my tired legs and unused lungs, I felt light as a feather. My father had never been to Portland. Now, at least a little part of him has been.

I finished the little four miler and went back to unpacking. I found my Timex Run Trainer and will probably use it for the remainder of my runs without fail. But my very first run as a Portland resident came at the ticking hands of my father’s Lorus.

Thank you for such a beautiful little post. Not only did I never run with my dad, he wasn't alive when I started running. Without going on and on here, he knows I run. He runs with me all of the time.

Dane,
As a parent, this post serves as a powerful reminder the importance of a sideline, finishline, end zone, and/or bleachers are to my children. The best race I ever had was the one when my 10 year old asked to run with me; side by side we ran every step. How wonderful that your first run in your new town was with a loving familiarity of your dad. xo.

I loved your post....I didn't start running until I was 35 and came from a family of couch potatoes but I love the hugs I get from my little ones when I cross the finish line. My 6year old has just started running and can already run a mile......I can't wait for her first 5K.