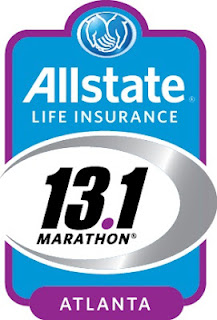 As an ambassador for the US Road Sports-owned Allstate Life InsuranceSM 13.1 Marathon® Series, I was recently asked to come and run the 13.1 Atlanta course to give runners more than just the usual course description and elevation profile. Even though I made my name initially in the marathoning world, I have always loved the half-marathon distance. It was a 13.1 mile race which got me into running in the first place, back in law school.  Granted, I was sort of tricked into running it, but that is another story!

I arrived in Atlanta in August and was dreading the weather. Fortunately, there was a break in the East Coast SwelterFest of 2012 and the heat and humidity were mild in comparison to what they had been for weeks. I met with my wrangler for the mid-week excursion, Jennie, at the airport and we went over the trip’s logistics and itinerary. On top of a circumnavigation of the course in a vehicle to make sure all the twists and turns were where they should be, I would also run the course to get a feel of what it would be like for runners to take on the Atlanta hills on October 7th.

During the drive it felt like the hills were going to be just brutal.  Normally, back when I would drive a course prior to running it (a practice I have since eschewed as it rarely gives you an accurate feel for the course on foot) I found a course usually seemed easy in comparison. As we crested and fell, I thought if this seemed hard in the passenger seat of a car, how would it feel when I ran it? The answer: pretty darn good.

First and foremost, let me dispel some thoughts you may have, since I am sure I had some of the same ones. The course does have some hills. This is Atlanta, after all. But those hills do not even come close to being as ferocious as they may first appear. In fact, many are downright pleasant, with a nice long sloping downhill often following a short uptick. For whatever reason, the car ride has exaggerated the hills and running them showed me how they may still be challenging, but definitely lacked the teeth I felt they originally brandished. 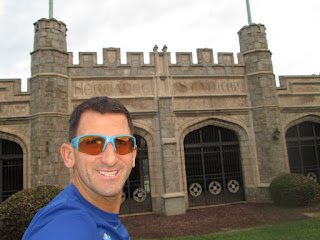 Second, while the race no longer starts/ends at Oglethorpe University, the course does run right past its outside perimeter.  As such, the course will still allow runners to take in the splendor and beauty of this liberal arts school and all of its stony architecture. Town Brookhaven will serve as the starting point as well as the terminus of this race as it did last year. This area may not be as historic as Oglethorpe, but will allow for much less congestion and ease for runners both arriving and leaving after the race.

Third, seriously, the hills aren’t that bad. In the entire Allstate Life InsuranceSM 13.1 Marathon® Series, including races in pancake-flat Miami and Fort Lauderdale, the fastest 13.1 finishing time is held here on this course. Read that again. Now stop whining about hills.


Having said all of that, let’s break this race down.

Starting at Town Brookhaven runners make a quick jog out and onto Peachtree Road. I am pretty sure that it is an Atlanta citywide mandate that every third roadway has the word “Peachtree” in it somewhere.  After a short jaunt on Peachtree, which runners will become familiar with later on, we pass the aforementioned Oglethorpe University and begin a series of runs through neighborhoods which may become the beautiful trademark of this course. 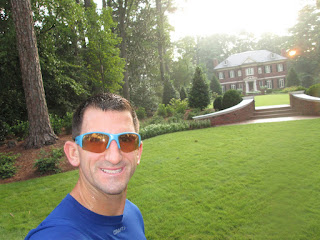 Over the next two miles, secluded in a green wonderland, with the Silver Lake in the backdrop right behind a canopy of trees, runners will be completely shaded from sun, wind or rain. Popping back out onto Windsor Parkway after this trek through greenery, the mansions are as plentiful as the road is soft. Before you know it, you are closing in on the first 5K, beginning to run down a nice long stretch of downhill toward the Capital City Club golf course and its well-manicured fairways.

Skirting the golf greens and the luxurious clubhouse, which are so inviting that you wish all golf courses were actually running courses, you are greeted by even more stately homes. Given the residential nature of this area, there are more than a few speed humps that runners must simply be aware of. It should go without saying but runners should always keep a careful eye out for their footfalls, so these little humps shouldn’t be much of a problem.  As we saw in the London Olympics when poor Morgan Uceny took a tumble, even elites can tumble on the buttery softness of an all-weather track.  In other words, just be cognizant of yourself and surroundings. Unfortunately, as this area is so beautiful, you might need a reminder when you are running through it!
The next stretch of roadway of note occurs after you have completed your run through the neighborhoods and turn back onto Peachtree Road.  For the next two miles, with traffic cleared for the runners to gallivant freely, a gently sloping uphill stretch awaits. Personally, while this may not visually be the best part of the course, it was the section I enjoyed the most, at least from a racer’s perspective. 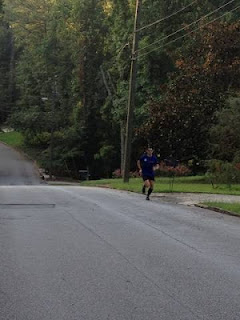 Here is where there are no thoughts needed to what direction one might need to turn or if there are any distractions ahead.  You can see for quite some distance in front of you to prepare for whatever is in store. Furthermore, all of your friends and family who cheered you at the start, needn’t move more than a few feet to cheer you on again. All a runner needs to do here is zone out, focus in on their stride or whatever they need to do to power through. I enjoy this type of racing where I can start making mental lassos around those in front of me and begin to pull them in. When you finally make your turn off of Peachtree and onto Johnson Ferry Road, you realize you are more than halfway done. Give yourself a high-five.

The next three miles are probably what I would consider the most difficult portion of the course. A small series of undulating hills through, again, glorious neighborhoods could leave a few with some tired legs. But if every course was easy, how could we brag to our friends?

Starting this section off, runners get a treat with a nice long downhill past Keswick Park. I always get a warm fuzzy feeling when I see proper use of green space, especially in a metropolitan city. Affording youth a chance to get out and experience athletics, while teaching skills so necessary in life to exist and prosper is so paramount. I know that is a grandiose thought to percolate from simply seeing a swing set and a dirt infield but it is what swells my heart. 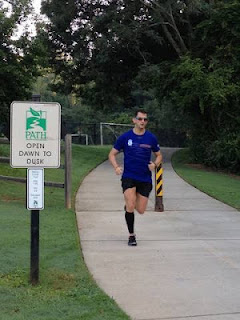 Another thing that swells my heart – the climb from the Marist School to Blackburn Park. This is a little bit of a toughie but I promise you it is not nearly as bad as you think. Plus, you get to reward yourself with a gorgeous run along a bike path, once again shaded from the morning sun, once you crest it. Personally I have always found bike paths to be a little more challenging than they appear at first blush. Their quick but short rises always seem to challenge me more than long steady climbs. Fortunately, there are very few of them as you run through Blackburn Park with your feet tapping on wooden blank bridges and crackling a few leaves and twigs which have fallen from above.

By now, you are less than a mile away from heading back to Peachtree Road and beginning the nice gradual decent to the finish.  Again, this portion of the course allows you to really stretch out your legs and smell the barn, so to speak. With the Peachtree Golf Course on your right (admittingly secluded some by a stone wall) you can take great solace in the fact that by the time you have finished your race, you will have burnt as many calories as someone who carries their own clubs for 18 holes. And they won’t get a medal when they are done. 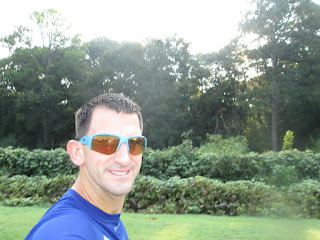 All told, I can see, in spite of some of the risers, why this course has produced some fast times. There is just enough use of all of the leg’s different muscles on these hills to keep fatigue from setting into just your quads or hamstrings. In addition, the course provides plenty of visual stimulation to keep your mind off of your effort when it does get difficult.

With just the right combination of scenery and elevation changes, the 13.1 Atlanta could very well be your new personal best!
Posted by Dane at 5:49 PM

Hi Dane, thanks for providing such a detailed, complete course description, along with photos! I'm excited for this, my 6th, half marathon, and am hoping to break 1:42. I have my 2nd marathon in three weeks, so this is probably about as good as it gets in terms of my fitness levels. I know the terrain will provide some challenges, but it's all about pacing and not choking mentally. At least the weather promises to be good. Thanks again for your post!

Glad you enjoyed it, Gail!

Agreed with Gail, thanks so much for a great preview of the course! This is my 3rd half, but my first major race in Atlanta (aside from Peachtree on July 4). Loved your descriptions, and am looking forward to make this work for me!

Thanks for the breakdown Dane. This is my very first half and I have had some serious doubts about being able to finish. I train in the mountains of North Georgia, and have been since March, so maybe this will prove to be helpful.

My pleasure, Megan and Tim!

Thanks for the description! I did this race 3 years ago and am doing it again this year. I'm a very slow runner policing a friend back from injury to not run too fast. And hoping to win a few mental battles from 3 years ago.